The notion that e-cigarettes are going to lure non-smokers or children into smoking tobacco cigarettes is one of the most persistent and poorly-supported arguments against the technology. In short, the evidence to date overwhelmingly shows that kids and adults who don’t smoke don’t vape either. But the argument refuses to die, being pushed by anti-smoking groups pursuing their vendetta against e-cigarettes even if it requires pissing into the continuous wind of contradictory evidence. And here’s another gust of that wind, coming in the form of the 2013 and 2014 results of ASH UK’s surveys on e-cigarette use.

The finding is the same time and time again: non-smoking adults or kids really aren’t interested in vaping.

SEE ALSO: Study reveals e-cigarettes may Not be a gateway to smoking

ASH UK commissioned a series of e-cigarette surveys in 2010, with adults being questioned on e-cigarette use and smoking habits in 2010, 2012, 2013 and 2014. These findings have been used in conjunction with up-to-date population data for Britain to estimate how many people vape in Britain. A specific survey for children aged 11 to 18 was conducted in 2013, and the results are included in the updated Fact Sheet on e-cig use.

For the most updated information and statistics on a variety of topics, including e-cigs, see the ASH Fact Sheet.

Adult Use of E-Cigarettes in Britain

According to ASH, there are around 2.1 million adult e-cigarette users in Britain, and this is primarily composed of current smokers (1.3 million), with around 700,000 being ex-smokers. As you would expect, most adults (smokers or non-smokers) are aware of electronic cigarettes, but only 35 percent of British adults believe that e-cigarettes are good for public health. Just 22 percent disagreed, but this still shows the power of negative headlines to polarize opinion on what is quite obviously a very simple question when the comparison you’re considering is with tobacco cigarettes. 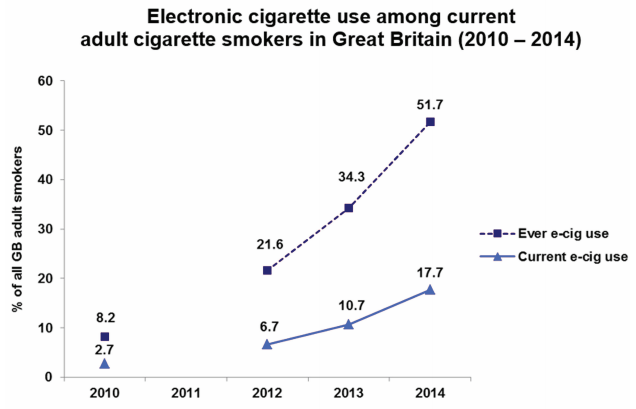 The main reasons given for vaping include stopping smoking entirely, reducing cigarette consumption and saving money, with 38 percent saying they used e-cigarettes to help them stop smoking altogether. Only 15 percent used e-cigs to help them consume nicotine in non-smoking areas like workplaces and bars. 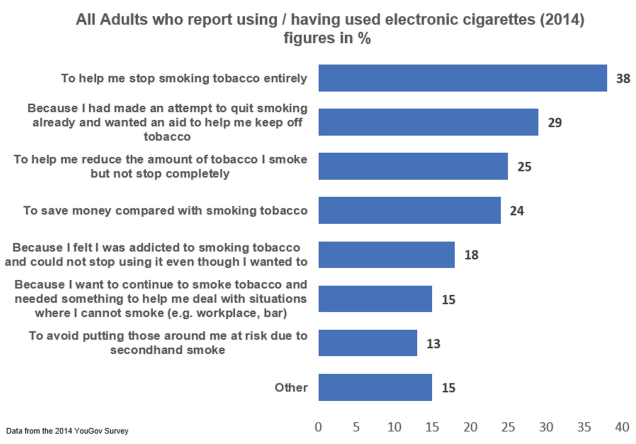 53 percent of ex-smokers used a tank system, compared to just 35 percent of current smokers – which seems to indicate (as other studies also have) that newer-generation e-cigs are more effective than cig-a-like brands. However, there is no way to establish cause and effect from this survey, so other evidence is needed to determine whether tank systems and higher-power devices are more effective for helping people quit smoking, although they definitely appear to be.

Child and Teen Use of E-Cigarettes

The 2013 data shows that only two thirds of 11 to 18 year olds have heard of e-cigs, with the proportion rising to 83 percent when just over 16s are considered.

Around three-quarters of children surveyed (who’d heard of e-cigs) knew that they are less harmful than cigarettes to the user and people around them than cigarettes. Understanding of the nicotine content was less impressive, though, because only 51 percent of 16 to 18 year olds who knew about e-cigarettes thought they contained nicotine.

SEE ALSO: E-cigarette flavors are not targeted at minors

Out of the children in the sample altogether, only 7 percent had ever tried e-cigarettes, and just 2 percent used them monthly or weekly. However, the vast majority of these kids were smokers – out of all of the non-smoking kids in the sample only 1 percent had tried vaping “once or twice.” As for the mythical scenario proposed by anti-smoking groups – that of a non-smoking kid who takes up regular e-cig use and eventually progresses to smoking (the full-blown gateway argument) – the survey found no evidence for even the first part of this happening whatsoever. In short, no children who had never smoked (or even ones who’d tried smoking once or twice) became regular e-cigarette users, and hardly any even tried it once. When asked if they’d try an e-cigarette soon, only 1 percent of never smoking kids said they would.

The “gateway” hypothesis fits in with the anti-smoking ideology, and the argument that e-cigarettes lure non-smokers and children into nicotine addiction is not going away any time soon. The only silver lining in this cloud of block-headed idiocy is that the evidence-base opposing this absurd notion will continue to grow, and more people will see it as the baseless nonsense it really is.

The lack of evidence for this “targeting of children” is undeniably one of the reasons the FDA didn’t introduce restrictions on “child friendly” (translation: nice tasting) e-liquid in their deeming regulations. In fact, undeniably with the goal of introducing some restrictions in the future if possible, they even canvassed for evidence that e-cigs are marketing to or being used in significant numbers by non-smoking children. The reason they had to do this is because there is currently none, and with every new finding it’s becoming more obvious that none will surface in the future either.

E-cigarettes are a harm reduction tool for adult smokers; they are not an evil Big Tobacco plot to hook your children on cigarettes! And even if they were, they’d be doing an awful job of it!