White Cloud’s e-cig produces billowing plumes of white mist, reminiscent of the cirrus clouds which give the batteries their name. We wish they offered manual batteries and a couple more nicotine levels, but there are no serious criticisms of this e-cig at all. Complaining about the White Cloud e-cig is pretty much redundant. It could use the option of manual batteries and some additional nicotine levels for people looking to reduce their consumption, but other than that it’s virtually flawless. It offers excellent vapor production, strong cartridges, delicious flavors and long-lasting batteries.
Price: $39.95

Electronic cigarettes have a pretty challenging role to play. To get die-hard smokers to ditch the tar and the barrage of chemicals in tobacco cigarettes, an e-cig needs to offer ample vapor production, a strong throat hit and plenty of the nicotine they crave. White Cloud Cigarettes is one of the best brands of e-cigarette, because their products have a reputation for doing just that. They've been featured widely in the media, in high-profile publications like Forbes, and have amassed a loyal following amongst the vaping community, but does the e-cig really deliver?

White Cloud is a Florida-based company founded in 2008. The three co-founders started working as distributors, gaining experience before securing their own factory in China to start producing their own. They're proud of their Chinese manufacturers, having carefully chosen the highest-quality facilities and subjecting every battery and cartridge to multiple quality checks before they're shipped to customers. They're also constantly researching and developing, as well as incorporating feedback from vapers to improve their products. As a result, there are 31 retail stores which carry White Cloud e-cigs.

The Cirrus Variety Starter Kit comes with three batteries (the Cirrus II, 3 and 3X), five cartridges, USB charger and wall adapter. It’s currently priced $79.95, and there are more affordable options if you choose one battery type. You can pick up the Cirrus 3 Kit (named after the three batteries you get) for $69.95, which comes with a three e-cig “Squid” USB charger, with the remainder of the contents being the same as in the Variety kit. Any starter kit is still a considerable investment, though, so it’s well worth finding out more before you make your purchase. The Starter Kit comes in a small cardboard box, with a lid that must be pulled upwards to remove. The more chest-like magnetic opening system is much more efficient, but the goods slip out easily enough if you hold the box without supporting the bottom. The branding is excellent, with a deep navy blue and crisp white color scheme and silver “WC” logos around the sides of the box, the “C” looking like a sharpened sickle-blade. The other kits are more cloud-themed and colorful, but are still very appealing. Inside, the three batteries are nestled in a foam upper layer, and everything else you need is underneath.

The batteries themselves are well-designed, available in either plain white or brushed metal, with no faux-rings in sight. They're blue and white, with a choice between grey, black and crystal tips, which light up a warm, fiery orange on inhalation. The two-piece design means they're intuitive to use, screwing together snugly and functioning automatically. Some vapers may prefer manually-operated ones, but if the automatic batteries function well enough this can be forgiven. White Cloud also offers cool skins for your batteries, which come in numerous designs and shrink to size under the heat of a hair drier. Although the skins are just a thin sheet of plastic, they look natural enough when applied, which is perfect for anybody who isn't inspired by the relatively straightforward aesthetics of the batteries. There’s also the “Phantom” kit, draped in black with matching StealthDraw cartridges.

This is one area where White Cloud really blows the majority of the competition out of the water, with six nicotine strengths to choose from. You have the choice between Nicotine Free, Ultra Light (6mg), Light (16mg), Full (24mg), Extra (36mg) and Double Extra (54mg). This is absolutely perfect for the heaviest smokers, although the “steps” might be a little widely spaced for those looking to reduce their intake. However, White Cloud caters for the heaviest smokers much more than the vast majority of ecig brands you’ll find on the market – V2 and Green Smoke only go up to 24mg, as a comparison. Realistically though, it’s hard to imagine vaping on the Double Extra strength for very long without starting to feel a little woozy.

The only device we're aware of that manages to make high-nicotine cartridges really enjoyable to vape is the JUUL by Pax. Despite a nicotine level of 50 mg/ml, the vapor from the JUUL manages to avoid being harsh or unpleasant. The device uses nicotine salts, which is much more satisfying than the usual type of nicotine found in e-cigs, and its the same type of nicotine found in cigarettes. If you want a simple device that's as satisfying as possible, the JUUL is one of the best options on the market.

The vapor production from the White Cloud e-cig is exceptional, regardless of battery size. You do indeed get crisp, white clouds of vapor with even a single puff, and even more when primed with a couple of introductory drags. The throat hit is more than satisfying, and when combined with the plumes of vapor the entire experience feels just like smoking a cigarette. The SmoothDraw technology works really well, keeping every drag gentle on the draw without compromising the realistic sensation. Of course, when you’re pushing to the higher nicotine levels the throat-hit is pretty powerful, but since only pretty heavy smokers would be likely to use this when first making the switch; it probably wouldn't be such an issue. Overall, this is one area where there are no complaints at all; it’s right up there with V2 for best vapor production. The StealthDraw cartridges reduce the output by around half in combination with one of the ordinary batteries, but it’s easy to remove entirely by holding the vapor in a little longer.

The flavor profile is also excellent, with 16 different options including three tobacco cartridges (Regular, Apache and Bora Bora), two menthols (Menthol and Snap), four fruit options (Peach Pit, Bad Apple, Strawberry, and Lime and Coconut), three spicy cartridges (Clove, the cinnamon and honey Kick, and the chili-pepper Diablo), two sweet flavors (Vanilla and Chocolate) and other such as Espresso and Moscow Mule. Apache is the best of the tobacco flavors, with the characteristic edge of rustic American tobacco, and Snap gives menthol-lovers a mint chocolate combo you can’t get enough of. There are plenty of great flavors, but with the Kick the hit of cinnamon is perfectly balanced out by the soothing honey, making it one to vape all day and possibly the best of the bunch. Moscow Mule is also impressive for its accuracy to the intended flavor; a definite favorite for any lovers of the cocktail. The Bad Apple doesn’t really have a strong enough flavor, but all the others are very vape-able. Overall a great set of cartridges: right up there with the flavor selection from V2 and Green Smoke – despite some not quite hitting the mark. 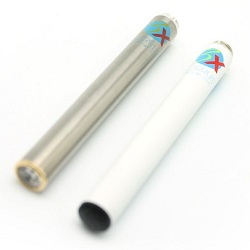 The three White Cloud batteries all work impressively well, with the shortest option (the Cirrus 3) lasting 200 puffs (around 15 cigarettes’ worth of use). The Cirrus II lasts 280 puffs, and the 3X gives a massive 600. In practice, the figures are something of an exaggeration (these are always quoted for the best case scenario), but you won’t run out of battery as long as you top it up before you go out. The 3X, even if not quite living up to 600 puffs (we didn't count, but this is obviously an extreme claim) is still a very impressive capacity for a pen-sized e-cig, one which is pretty much unrivalled amongst all similar-sized models. If you want a cig-a-like model with a battery you can really depend on, this would be it. With the 3X (and the II, depending on how much you vape), you don’t even need to worry about taking a spare with you when you head out to work.

Charging is also pretty quick (taking around three hours), and the short lead between the USB connector and the screw-port for the e-cig means that it doesn't poke out of your computer precariously when you’re charging. The “Squid” charger (included with the Cirrus 3 kit) has three wires extending from the main port, so you can charge up all your batteries simultaneously if you pick one up. It’s a shame you don't get one with the Variety Starter Kit (given the kit’s higher price), but the ChargeBolt (standard) option still does the job well.

The manufacturing quality of the White Cloud e-cig is excellent, which is attested to by the CE and RoHS compliant stamps of approval on the kit. The 3X battery in the starter kit had a slightly loose thread connection, but the others had no issues whatsoever. Plus, this was easily rectified by pushing it back into place. It even survived a perilous drop into a glass of wine (which was the second time I've done that!), functioning perfectly again after being dried out.

The innovative approach to the technology taken by White Cloud is pretty much a guarantee of their attention to detail when it comes to quality. The batteries themselves are precision engineered to protect against the damage that can be done to the cells through overcharging, and the ChargeBolt charger even has the power to revive an e-cig battery which has dropped below 2.7 V (which would be effectively dead if you tried other chargers). Similarly, SmoothDraw (and ClearDraw) cartridges have a centrally-located coil to protect the user from the (admittedly tiny) risk of excessive heat, and a unique design to prevent the coil from flooding with liquid. These small benefits might not be game-changers, but it goes to show how much care White Cloud put into their products. Plus, it all goes together to offer an excellent vaping experience with the brand.

Even if there are problems with your e-cig, White Cloud offers a six month warranty, which is extendable to a massive two years for an additional $29.95. As usual, the cartridges aren't covered by the warranty, but if they genuinely malfunction and it isn't your fault, you can get replacement at no additional cost. Although many manufacturers offer a whole year warranty (if not longer) the fact that White Cloud covers you for defects in disposable components is a huge plus-point. Overall, the manufacturing is excellent and although the warranty may not be the best, you're well covered in the event of a malfunction.

There is very little to criticize with the White Cloud e-cig, thanks to an excellent battery life, thick clouds of vapor, delicious flavors and more than enough nicotine levels. For heavier smokers, the combination of brilliant battery life and plenty of nicotine makes it easily one of the best options on the market. Perhaps smaller gaps between nicotine levels would be better, and it would be nice to have manual batteries or e-liquid available, but you’ll be hard pressed to find a better e-cig. It’s on par with V2 Cigs for vapor production, and the flavors are up there with Green Smoke’s, making White Cloud a fantastic all-round brand.