One of the most commonly heard criticisms of e-cigs is that they just allow nicotine addiction to continue in some other form. The thing that makes this anti-vaping argument fairly unique is that it’s actually sort of true. Yes, some vapers do continue to consume nicotine, and nicotine is a highly addictive drug. There is no denying that; it’s why people smoke cigarettes in the first place!

The problem with this argument is that it’s missing the point of e-cigs entirely: e-cigs aren't designed to help people overcome addiction; they can just be used for that purpose if the user so desires. The real point of e-cigs is to drastically reduce the harm smokers do to themselves in their quest to consume nicotine.

Harm reduction is basically a movement which rejects the abstinence-only approach favored by groups like Alcoholics Anonymous (or indeed, Nicotine Anonymous). Stopping taking a substance altogether doesn't work for everybody – as countless smokers who have no interest in quitting can attest to – so forcing abstinence is a recipe for failure in some cases. Since only around 3 to 5 percent of people successfully quit smoking “cold turkey,” that leaves at least 95 percent who can’t just stop consuming nicotine.

As things stand, they have the option of trying things like gums and patches – which only add around 2 to 3 percent to the cold turkey success rates and also contain nicotine (so they too “allow addiction to continue”) – or just going back to the tobacco cigarettes.

E-cigs are a much needed harm reduction measure. For the smokers who can’t quit, they provide a middle-ground, with addiction being allowed to continue, but in a form with drastically reduced risk that still offers the sensory feedback they’re looking for. This is the key purpose of e-cigs, but many vapers still choose to beat their nicotine addiction anyway.

Most brands offer several different nicotine levels, so users can choose to taper down their consumption until they’re using nicotine-free liquids and cartridges or not vaping at all. When we first make the switch, we’re all still consuming nicotine (that’s the point of vaping!), but most of us choose to reduce our consumption gradually.

The really important point is that it’s down to the individual. If you want to stop consuming nicotine, then e-cigs can be a really effective stepping stone to abstinence, but if you don’t then it’s not really a problem. Nicotine by itself is not a dangerous substance – it’s analogous to being addicted to caffeine – so yes, it’s better to be abstinent, but if it isn't right (or doesn't work) for the individual then it’s not really a relevant moral or medical issue.

SEE ALSO: Top 10 Studies on Nicotine You Need to Know About!

Ask any doctor (who didn't get his or her qualification from the back of a cereal box) whether you should be addicted to nicotine in the form of cigarettes or e-cigarettes, you can rest assured the answer will be e-cigs every time.

Unless you’re living in a fantastical world of your own creation where everybody can successfully quit nicotine cold turkey, or you have a reason that being addicted to a relatively innocuous substance offered in the safest possible form is immoral or otherwise “wrong,” then there is no reason to have a problem with e-cigs. It isn't addiction we’re trying to beat; its cancer and the whole host of smoking-related illnesses.

Vaping is More of a Hobby Than an Addiction 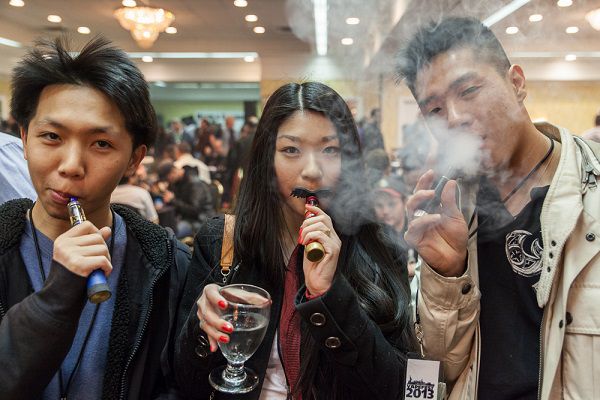 The majority of smokers don't make the switch to vaping in order to end their nicotine addiction. We realized the dangers of smoking resulting from the over 4000 chemicals cigarettes contain. Many of us physically felt the effects attributed to many years of smoking. What we found in electronic cigarettes was an alternative. In vaping, we have a healthier alternative to smoking tobacco cigarettes. And for some of us, vaping has become a newfound hobby.

We won't deny the fact that nicotine is a highly addictive drug. When a smoker switches to electronic cigarettes, they are still most likely consuming it to an extent. However, most of us gradually reduce our intake by using cartridges or e-liquids with lower concentrations of the drug and eventually become nicotine free.

A recently published PLOS One study found that 73 percent of participants who stopped smoking using e-cigs also quit vaping by the end of the 52 week trial period. Some of us have quit vaping and smoking altogether while those who continue to vape have turned into a hobby. And hey, some smokers simply don't want to quit nicotine; they just want to “smoke” in a way that drastically reduces the harm done to their bodies.

Furthermore, many of us hobbyists have drastically reduced our nicotine intake or even completely cut it out in some instances. And for those who haven't, I've already shown you how nicotine is not poisonous, nor does it cause cancer when inhaled in its pure form.