While most e-juice subscription services stick to e-liquid, Vapebox’s decision to incorporate hardware sets them apart from the crowd, and makes them a fantastic option for vapers looking for both gear and juices. For juice, there are better services, but for gear and juice Vapebox reigns supreme. Note: This review has been updated – read the latest look at the Vapebox service here!

Most subscription services stick to e-juice: offering a selection of flavors chosen specifically to suit your tastes, shipped out to you each month. But Vapebox does things a little differently, with the option of adding devices and atomizers to your box for a varied, goodie-box of vaping gear. The result is a fairly unique e-juice subscription service, with more to offer vapers than just juice, and plenty of loyal subscribers to boot, but is it worth signing up? We’ve tested out the service for our Vapebox review to find out.

Vapebox ultimately works in pretty much the same way as other e-juice subscription services: you choose your desired subscription level, give them some information about your preferences and then you’re billed for the first month and your box is shipped out.

There are three options for subscriptions to Vapebox, either offering juice only or juice and hardware. For juice only, you can choose between the Sampler box, at $20 per month for 45 ml of e-liquid, or the Juice Lovers box, at $32 per month for 75 ml of juice. The hardware-containing option is the Enthusiast box, which offers 75 ml of juice and two pieces of hardware and/or accessories for $60 per month. The Enthusiast plan is their most popular (and the one I tried), but it’s good that there are also options for vapers just interested in picking up some juices.

You receive a “Welcome Box” first – which ships out within a week of you signing up, and from then on you’re charged on the 15th of the month and your boxes ship out so they arrive towards the beginning of the next month.

The sign-up process is pretty straightforward: you select your level of experience with vaping (beginner, some experience or “quite experienced”), your preferred nicotine level (0, 3, 6 or 12 mg/ml), which groups of flavors you like (a minimum of three, with a choice between bakery and desserts, candy, cereal, coffee, custards, creams and vanilla, fruits, mints and menthol, tea and herbal, and tobacco) and whether you use tanks or rebuildables.

You can then choose whether you’re open to trying new things (why you’d say “no” yet be signing up for a service like this is beyond me) and whether you prefer higher-VG juices. Then you set up your payment details, review your selections and you’re ready to go. 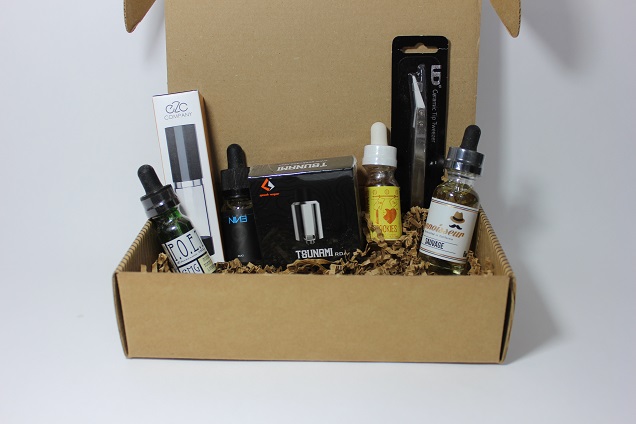 The boxes from Vapebox have been updated since this review was first posted, but they still have a relatively straightforward appearance, with a bare cardboard color and “Vapebox” printed on the top alongside the logo. The underside of the boxes have spots for the top three juices from the box, with award ceremony style spots for first, second and third place, and the sides direct you to Vapebox’s social media pages.

Inside, your goodies sit nestled in a liberal amount of shredded paper, alongside several pieces of card giving you the details about what’s in your box. There’s also a little monthly greeting from the Vapebox team, which is a nice addition for a bit of a personal touch (even if you know the same message goes out to every subscriber), and serves as a mini-introduction to the month’s box. In the most recent boxes you also get a little “Menu” with information about everything you've received and your name printed on top, which is a fantastic touch (similar to what you get with Zamplebox). There’s also a card full of warnings and safety information right at the bottom of the box, which was well-designed and laminated from the February box onwards.

Overall, despite the still fairly generic appearance, the unboxing experience from Vapebox does a pretty good job – you definitely get a “kid on Christmas” like feeling as you dig through the copious quantities of shredded paper and read through the personalized menu describing all your new goodies.

The E-Liquids and Gear – How Was the Curation?

As before, I received the Enthusiast box in February, March and April which gives four bottles of juice per month alongside two pieces of hardware or accessories. I told them I use rebuildable devices (as opposed to tanks), and selected every group of flavors apart from tobaccos, menthols and mints and teas and herbal. The number of questions you’re asked does fall short of other services, but that’s really all they need to put the box together, so they could easily pull off something great. 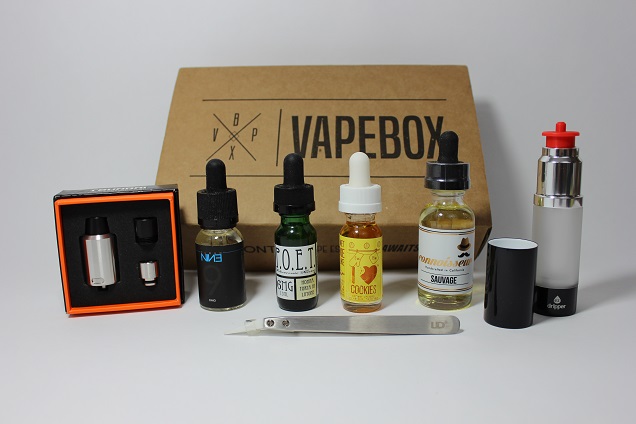 Vapebox improved a lot in 2016, with a better box design and plenty of improvements to the gear and juice you receive with your subscription. Although the January, February and March boxes were excellent, the April edition was potentially the best one yet. Since we’ve covering a lot of months (especially since this latest update), the run-down of the March box will be a little shorter than the others (the February section below was written previously, so we’ll leave that as is). However, the box was right in line with the quality of all of the Vapeboxes recently. There was a definite improvement from January onwards in comparison to the box I’d received late last year, and the February box continued in the same vein:

What Did I Think to Vapebox?

Vapebox was a solid service before, but they’ve really stepped up their game in 2016. While some of the same issues do still persist – the seemingly formulaic choices of flavor (based on the featured mixers for the month rather than a free choice as with services like Zodist) and the relatively simplistic approach to flavor profiling – the improvements really take it to the next level.

In every one of the boxes I've received, I got one juice that I absolutely loved; not only all-day vapes, but the sort of thing I’ll always make sure I have a bottle of. All of the juices were enjoyable, admittedly, but the fact that I found one absolutely delicious juice that was perfect for my tastes in each box is really all you want from a subscription service. Not every one is a hit – only Zodist accomplished that out of the services I tried for the Battle of the Boxes post – but all were definitely enjoyable and in line with my preferences.

As for the hardware, compared to the Colonial clone I received in my original box, the Sigelei 75 W TC, the GeekVape Tsunami and the Dog3 were excellent, a huge step in the right direction. Getting the Dog3 so soon after release, in particular, was both a very welcome surprise and a promising sign of things to come from Vapebox, and getting a high-quality mod in the March box was even better. The accessories – the ceramic tipped tweezers, drip tip, dripper bottle and the Clapton wire – were also solid inclusions; with the quality of the main pieces of hardware, getting some great accessories is nothing to complain about at all.

As for the price, at $60 per month, it’s a fantastic deal for 75 ml of juice and the hardware and accessories. For example, the Dog3 will run you about $40 alone, and when you throw in the best juice I received in the same box, it’s already giving you equivalent value for money, and then you have three more bottles of juice and some Clapton wire on top of that. The same goes for the Sigelei 75 W TC: it's a $45 mod, and then you get four delicious juices and a custom drip tip thrown in for good measure too. You may not get to pick them yourself, but it’s definitely a fantastic deal.

The only real criticism – as mentioned with reference to the juices included – is that the personalization could still be improved a little. This isn’t a criticism so much as a hope that things will continue to get better: if they expanded the sign-up questionnaire so you could provide more information about your preferences for both flavor and devices, the offerings could be better tailored to your preferences. The main benefit of this would be for the e-juice, but being able to offer more details about your hardware preferences would make it more likely that everything in your box is perfect for you.

In just a few months, my conclusion on Vapebox has gone from “a solid service that’s pretty much the only game in town if you want juices and hardware,” to “pretty damn amazing all round.” The main improvement has been with the hardware, with the quality of devices hugely improving and some newly-released gear also finding its way into your monthly package. Some extra personalization could lead to further improvements, but even as things stand, it’s right up there with the best of them. If you want a monthly collection of new juice and vaping gear to try out, it’s both a fantastic service and a great way to save money.