Zamplebox is a great e-liquid subscription service overall, with some delicious juices in the line-up and fantastic prices. It could use a more personal approach to flavor selection, but whatever system they have in place is working pretty well. A good choice if you’re looking to try some new juices. Finding new juices you love isn’t easy. With countless options on the market and conflicting advice on which are worth trying, choosing a new juice company to try out is very much a trial and error process. But there is a way to make navigating the options a little easier: e-liquid subscription services like Zamplebox.

E-liquid subscription services give you a selection of e-liquids delivered to your door each month in return for a monthly fee, with the flavors usually chosen to match your specific flavor preferences. This effectively handles everything for you: not only choosing flavors you should enjoy, getting them sent out to you too and ordinarily for less than you’d pay for them at full retail price.

Zamplebox is the most well-known of these e-liquid subscription services, having gotten started in late 2013 and been rapidly gaining popularity since then. There has been some controversy, though – with accusations of juices made “in-house” being sent out to vapers and the flavor curation process being effectively useless – and reviews have generally been mixed, so is it worth trying Zamplebox?

Our Zamplebox review puts an 11-botttle box from the service to the test to find out.

After choosing your type of box and your level of experience with vaping – beginner, intermediate or advanced – you select the general groups of flavor you want to receive, with a choice to select or deselect dessert, fruit, tobacco and menthol. You’re then given two fields which allow you to choose flavors you absolutely want to avoid and the flavors on your “wish-list” that you would love to try. Next, you select your nicotine level – with a choice of 0, 3, 6, 12 and 18 mg/ml – and are given the option of sending high-VG juices when available.

When you’ve answered all of these questions, your box is curated and ready to go. After you’ve made the payment for the first month, it takes Zamplebox one to two days to process your order and then it’s shipped out, with another three to five days before you’ll receive your box. Subsequent bills come out the same day of each month, and your boxes ship at about the same time.

Domestic shipping costs $4.99 to $8.99 depending on the size of the box, and international shipping is available – great for vapers like me who live in the UK or elsewhere – with prices ranging from $9.99 to $14.99 to the UK. The international rates will vary depending on where the box is being shipped to. The eleven-bottle box I received was well-presented, with the Zamplebox logo on the front and “Official Member Box” printed in various places to make you feel all important. Inside, the juices were arranged in two layers of foam, with a slot cut out for each individual bottle, and the two layers split by a flat rectangular piece of foam. On top of the juices was my “September Tasting Menu,” which listed all of the juices included, along with a description of each flavor and the percentage of VG in each flavor (and the retail value – clearly an attempt to underscore the cost savings). 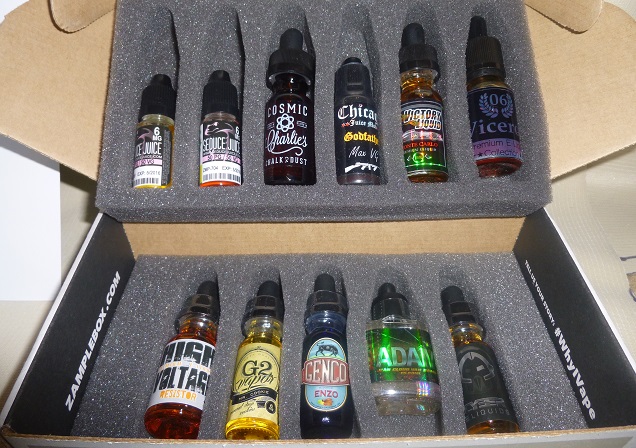 The overall effect is really great, with the menu in particular being a pleasure to look through when you’re looking for something new to vape, and the overall box-of-chocolates style presentation of the juices working pretty well alongside it. You peruse the menu and find a flavor you like the sound of, and then look through the individual bottles for whichever one you chose. It’s definitely an enjoyable experience, comparable to choosing a chocolate from a well-presented box in more ways than just how the juices are laid out.

The Flavors – How Was the Curation? The presentation is one thing, but the most important thing is what the flavors I received were like. In general, I like desserts and fruits, with a particular fondness for cinnamon-based juices and a history of absolutely loving banana nut bread flavors, but I’m really quite open on the type of flavor I enjoy, but I’m not particularly interested in tobaccos and menthols (although I enjoy some of them). I did my best to communicate this to Zamplebox through the sign-up process, and this is what I received and my brief thoughts on each.

Overall, the flavors I was sent in my Zamplebox were pretty good, with some stand-out options and the majority being at least enjoyable. With only one juice I didn’t really like (Envy from Seduce Juice) and another that I was thoroughly unimpressed with (Resistor by High Voltage), it’s hard to complain too much.

The curation process – how well they selected flavors based on my preferences – seems reasonably good, and I liked the emphasis on cookie dough for much of the box and the inclusion of a cinnamon juice, but for some of the juices (particularly the fruity ones) it did feel a tad generic. I did include fruity juices in my preferences, but the selection occasionally felt more like a “send out the standard array of fruit juices for this month” than a “this guy likes x, y and z, so look for fruity juices incorporating those elements too.”

In fact, you can get a preview of what’s in your box pretty much immediately, so it’s probably handled automatically based on the flavors you list when signing up. Your juices are apparently being picked by an algorithm, basically. In short, it could have done with being a little more personal overall.

There are a lot of subscription services to choose from these days, and although Zamplebox is the biggest, they do have some stiff competition. Overall, I thought the presentation was excellent, the flavor curation process was pretty good and the specific juices I received were great overall, but the main thing Zamplebox is missing is a personal touch. Despite this, Zamplebox is still a great service: it’s one of the cheapest subscription services per ml, and I got plenty of juices I enjoyed out of the eleven included. It could be improved, but if you’re looking to discover some juices, they’re still one of the best options around.