Our Uwell Crown review takes a look at one of the most widely-recommended sub ohm tanks on the market. Is it as good as it’s claimed to be, or is it just empty hype? The Uwell Crown is an exceptional sub ohm tank. It’s a no-nonsense performer, with a minimalist appearance, a functional yet simple design and top-quality manufacturing. While it may not be ideal for just-switching smokers who prefer mouth-to-lung hits, for most vapers it’ll be hard to beat. On lists of the best sub ohm tanks on the market, you’ll always see the Uwell Crown mentioned. Offering a 4 ml quartz glass tank, a top or bottom-filling design, a solid selection of sub ohm and non sub ohm atomizer heads, adjustable airflow and more, it looks great on paper, but admittedly it doesn’t seem like anything too special. Priced at $28.95, it may not be expensive but it isn’t exactly a low-budget option either, so why the popularity? Is the performance from the tank that good? We’ve tested the tank for our Uwell Crown review to find out. The Uwell Crown sub ohm tank comes in a transparent plastic box with key information about the tank on the back. Inside sits the tank, a spare quartz glass tube, a 0.25 ohm dual coil installed, a 0.5 ohm dual coil option and a 0.15 ohm Ni200 coil, and the usual selection of spare O-rings. This isn’t anything too special, but it’s everything you expect, and getting three coils rather than just two is a nice bonus.

The Uwell Crown sub ohm tank has a very straightforward design, but every aspect of it has been pulled off beautifully. Visually, the black version I got is just that: a clear glass tank with a black top and bottom and no branding messing up the appearance. Inside, the chimney matches the tank color and rises up from four black posts that surround your coil. Overall, it looks formidable, but the no-nonsense style means it suits most vape mods very well.

The Uwell Crown vape tank does an excellent job of balancing simplicity with ease of use. Like most sub ohm tanks, it consists of a base (with an airflow control ring and a spot for your coil), the glass tank and a top cap, with a chimney running from the coil to the drip tip and top cap. The airflow control ring and the top cap are a little wider than the main body of the tank and have textured edges so they’re easy to grip. This doesn’t sound that impressive but it really makes a difference for refilling and making airflow adjustments. 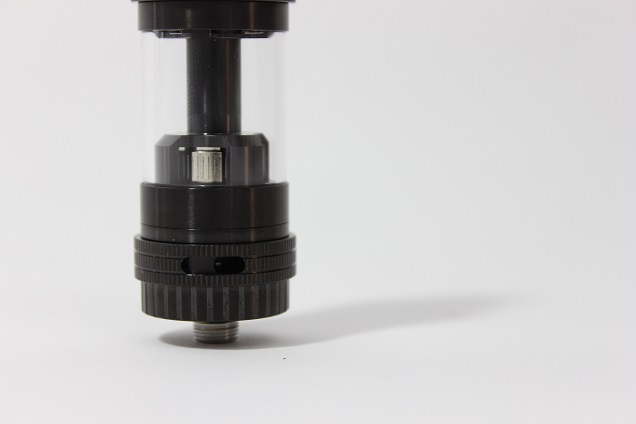 The airflow control is the standard slot-style offering, with two openings on opposite sides that can be opened or partially covered to suit your tastes. It’s a bit better than it first appears, though, because the control ring clicks into specific settings. This makes it more like a step by step adjustment than a smooth one, although you don’t have to stop on a click if you don’t want to. For on-the-fly adjustment, though, this little feature is very useful.

The top-filling system also follows the same general formula. The style is basic but the execution is excellent. The textured surface on the edges of the cap and the smooth, efficient threading make refilling a simple, painless process. There are four openings around the top of the central tube to fill up into, and they’re comfortably big enough for ordinary dripper tops.

These raised sections also help with attaching and detaching the Uwell Crown tank from your mod. With other tanks, if you’re not careful, you can unscrew the upper part of the tank from the base when you’re meaning to unscrew the whole thing. The improved grip on the Crown tank makes this issue a lot easier to avoid. It’s much easier to grip the lower part because of the airflow control ring, and the design means you’ll only be punished for gripping from the top if you tighten the tank down too firmly onto your vape mod.

On the whole, the Uwell Crown’s no-nonsense but effective design is exactly what you want from a sub ohm tank. I have no complaints whatsoever about the design. Some vapers may have wanted side-filling or liquid flow control, but the quality of the Crown means you don’t miss those extra features. You just don’t need them.

The Coils – Vapor Production and Flavor 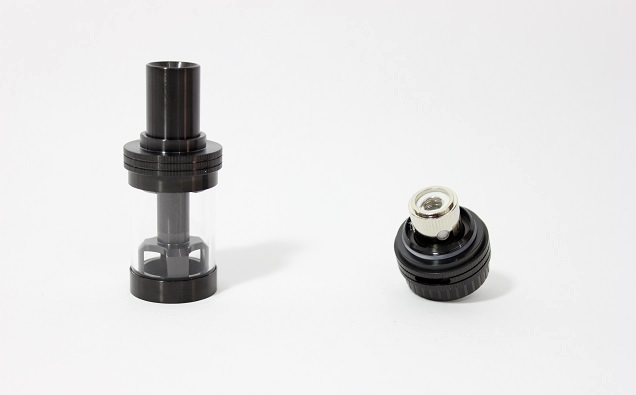 Much of the quality of the atomizer tank comes down to how well the coils work, and on the Uwell Crown there is really nothing to worry about in this area. The coils are all vertical, and are wicked with a healthy wad of Japanese organic cotton. The dual-coil designs just improve things further. The wicking ports on all of the coils are more than big enough to cope with higher-VG e-juices. There were no issues with wicking throughout testing.

With the 0.25 ohm coil included in the kit, the performance is exceptional. The flavor is clear and vibrant, and vapor production is outstanding. This can take higher wattages than for the 0.5 ohm coil without the vapor getting unpleasantly hot, and although I’m not much of a high-wattage vaper, I could take it to around 80 W before it started getting a bit much for my tastes, though others enjoy the vape with these coils at higher levels.

For the 0.5 ohm coil, the situation is much the same. You get ample vapor production and exceptional flavor from your e-liquid. The key difference is how high a wattage you can comfortably vape at, but (again as a lower-wattage vaper) it didn’t make much practical difference for me. With this coil, about 70W was the ceiling for me, but I was more than happy at 50W. However, again other vapers still enjoyed the hotter vape at 80W.

I also tried a Ni200 coil, and the performance from this was also hard to fault. The performance was just as good as the 0.25 ohm options, allowing for the differences from TC vaping. The vapor production was still excellent and the flavor popped out just as much as ever. The flavor from the Ni200 coil received some criticism from other vapers, but personally I still thought it was great.

On the whole, all of the coils included with the Uwell Crown sub ohm tank performed excellently. I didn’t get to try the 1.2 ohm option or the RBA head (which are both sold separately), but it’s hard to imagine they’d be disappointing based on the coils I tried. The design of the Uwell Crown atomizer tank is efficient and effective, and all of the coils are solid performers. Based on that alone, it shouldn’t surprise you that it’s a fantastic tank in use. But are there any niggling issues that get annoying after you use it for a while? Does it leak?

As always, ease of use is the biggest factors in determining what the tank is like for day-to-day vaping. The design features praised earlier basically guarantee that the Crown tank is great in this department. Whether you’re interested in refilling, changing coils or cleaning the tank, it’s all so simple you’re unlikely to need the included manual.

For refilling: unscrew the top, drip your e-juice in until it’s full and close it up. That’s it. No fiddling with liquid flow controls to prevent hemorrhaging leaks. No opening a flap to reveal a tiny fill hole. No need to invert the tank. It just works, and in the most intuitive way possible. If you want to fill up from the bottom, while I don’t see why you would, you can do it. 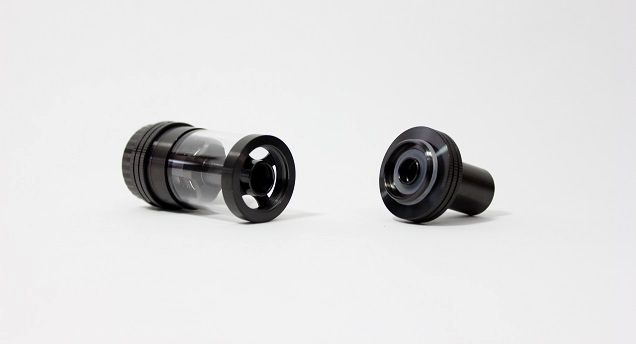 Changing the coil is easy. You invert the tank, unscrew the base, and then replace the old coil with the new one before reconnecting. The coils simply screw in to the base, as always. Cleaning just requires unscrewing both the top and bottom (when your tank is empty!) and then rinsing them under the tap or whatever approach you want to use.

Throw in the great performance and the only thing that could hold the Crown sub ohm tank back becomes the potential for leaks. Throughout the testing of the vape tank, I’m yet to notice any significant leaking at all. I have no doubt that it’s possible, but this is the only tank I recall testing where I didn’t have even a little bit of actual leaking. I’ve had a bit of condensation around the air hole (or maybe the smallest leak imaginable), but it’s been largely smooth sailing.

Ordinarily, you’d have to be careful about laying a sub ohm tank down on its side, or even slightly on its side, but with the Crown there’s nothing to worry about. I have a bad habit of laying back watching TV and leaving my mod lazily resting on my chest, and normally I’d be scolded for this with e-juice leaking onto my shirt. With the Uwell Crown it just doesn’t happen.

That might sound silly (and it obviously is a bit), but it’s a huge plus-point for the tank. A serious leaking problem can turn an excellent performer into something you don’t even want to use. But for the Crown sub ohm vape tank, the dependability and the complete lack of any little minor issues would have made it a great tank even without the high-end performance.

Although this review has been thoroughly positive, there are a few things which hold the tank back a little. Firstly, although 1.2 ohm coils are available separately, the contents of the standard kit don’t offer much of an option for mouth-to-lung loving vapers. You can set the airflow to the minimum, but getting a tight airflow with the included coils is very difficult. For direct to lung inhaling, longer-term vapers this isn’t a problem, but for just-switching smokers it often is.

Many sub ohm tanks also come with an RBA head as standard, but the Uwell Crown is not one of them. For many vapers – especially newer converts – this isn’t a particularly big issue. However, options like the Kanger Subtank mini and SMOK TFV4 come with RBA heads as standard. So it’s a bit of a disappointing omission from Uwell. Finally, some reviewers weren’t too big on the flavor of the Ni200 coil. Although I didn’t have an issue with it, it’s worth bearing in mind as a potential limitation.

On the whole, though, the Uwell Crown sub ohm tank does a fantastic job in use. Easy to use, excellent performance and very few downsides. As covered in the design section, the build quality on the Uwell Crown sub ohm tank is hard to fault. Everything works exactly as it should. From the ruggedness of the overall construction right down to the smoothness of the threading, the Uwell Crown is beautifully put together.

It’s hard to criticize the Uwell Crown sub ohm tank. The design is sensible and makes using the tank as easy as could be. The performance is astounding, easily on par with what you expect from rebuildable atomizers. The execution is near-flawless. It doesn’t leak. It’s not the cheapest sub ohm tank on the market, but it’s far from the most expensive. There are some flaws – notably not being well-suited to mouth to lung vapers without the 1.2 ohm coil – but they pale in comparison to what the tank has to offer. On the whole, it’s one of the most unanimously-praised devices on the market today, and it’s very easy to see why. If you’re in the market for a sub ohm tank that does exactly what you want it to without needless complications or continuous minor irritations, the Uwell Crown is the tank for you.