A new study has offered further evidence of the harm reduction potential of e-cigarettes, finding that e-cig vapor is less toxic to lung cells than cigarette smoke, and that vaping leads to less oxidative stress than smoking. The finding underlines the importance of considering the potential risks of e-cigarettes relative to those of tobacco cigarettes: previous studies looking at the effect of vaping on the lungs have obtained similar results for oxidative stress, but by comparing e-cigarettes to air they generated concern about potential risks.

For almost all vapers, e-cigarettes are an alternative to tobacco cigarettes, rather than an alternative to not smoking at all, so the results of this study are more directly relevant than those conducted previously. The findings show that e-cigarettes do reduce the viability of cells and induce oxidative stress, but crucially, the viability of cells was 4.5 to 8 times lower for cigarette smoke and oxidative stress levels were 4.5 to 5 times higher.

What They Did – Exposing Lung Cells to E-Cigarette Vapor, Air and Smoke

The researchers tested e-cigarette vapor produced from two e-liquids – both from Johnson Creek, in 0 % and 2.4 % nicotine – on cultured human bronchial epithelial cells (lung cells), comparing the e-cigarette results to those obtained for cells from the same donors exposed to either air or cigarette smoke. The donors were both elderly (69 and 75) and were both cancer patients, with one of them having lung cancer. The cells were exposed to 200 puffs from an e-cigarette and the smoke from ten cigarettes, each puffed six times, meaning 60 puffs in total. The e-cigarette was puffed for two seconds with an interval of ten seconds between puffs, and the cigarettes were puffed in the same way. They also tested PG and VG in (99.5%) pure form, and they waited 24 hours after exposure to do the analysis for all samples. The details of the study are described in more detail in the full paper, which is available for free.

Dr. Konstantinos Farsalinos comments on the study, pointing out that this puffing pattern could potentially lead to overheating and increase the production of aldehydes. His own research on real users’ puffing patterns (which the authors referenced) found that four second puffs with a 20 to 30 second interval between each is more representative of real-world use. However, the device used was a 3.3 V, eGo-size battery with a 2.2 ohm clearomizer, so at least the power going to the atomizer was reasonable.

Generally, the results show that e-cig vapor is more toxic to lung cells than air and induces oxidative stress – which is an imbalance between reactive oxygen species (which damage cells) and the body’s anti-oxidant defenses – but it was less toxic and resulted in less oxidative stress than cigarette smoke. Even using the unadjusted results – with 3.3 times more puffs from e-cigarettes compared to tobacco cigarettes – it’s clear that stress is higher in the cigarette-exposed cells than the vapor-exposed cells and that the viability of cells was lower after cigarette exposure than after vapor exposure.

Between different e-cigarette samples, the differences were fairly small. The presence of nicotine made little difference, only slightly increasing the level of oxidative stress in samples drawn from one of the two donors. For cell viability, PG exposed cells were slightly more viable than those exposed to commercial e-liquids, but VG exposed cells had much lower viability, with the (unadjusted) result being closer to those obtained with cigarette smoke.

The researchers crudely adjusted the results to account for the difference in puffs, multiplying the oxidative stress values for cigarettes by 3.3 and dividing the viability results by 3.3 to produce more directly comparable results. This may be a valid method, but it does seem fairly simplistic, and it would undoubtedly have been better to directly compare the effects of equal numbers of puffs. Regardless, after this adjustment, the cigarette smoke exposed cells showed between 4.5 and 5 times more oxidative stress than the vapor exposed cells and 4.5 to 8 times less cell viability, with the variability in the results being due to the different donors.

What Does This Mean for Vapers?

The news here is generally positive, showing that previous results showing oxidative stress in response to vaping are valid, but crucially placing them into context with tobacco cigarettes. It’s another confirmation that while e-cigarettes are unlikely to be absolutely safe (decreasing cell viability to around 60 percent of that of the air-exposed cells and increasing oxidative stress by around 25 percent), they are almost certainly safer than cigarettes, and are probably substantially safer.

The only thing to take into account is the fact that a vaper undoubtedly takes more puffs per day than a smoker does, likely due to the differences in nicotine delivery between cigarettes and e-cigs, if nothing else. The authors reference a survey of vapers that found that 22.6 percent of vapers get through 4 to 5 ml per day, and based on this – and the number of puffs obtained from 1.5 ml using the chosen device for this study – determine that these vapers must be taking about 1,200 puffs per day, which is obviously quite ridiculous. 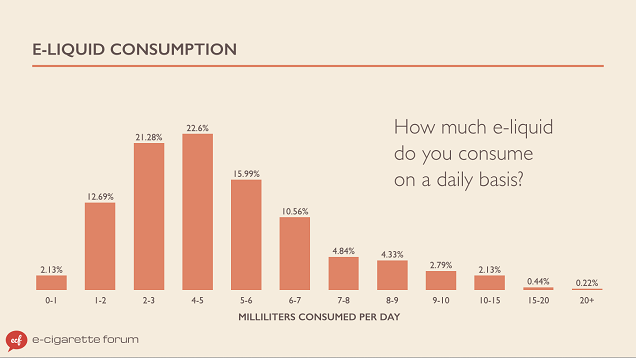 Assuming 8 hours of sleep a night, this would mean 16 continuous hours of puffing at a rate 1.25 times per minute. This estimate is clearly silly, probably because higher-power vaping with more efficient wicking works through more liquid per puff, real-world puff times are longer than those used by the smoking machine in this study, and because of imprecision in the survey, which didn’t offer 3 to 4 ml per day as an option, but found that the two most common answers were 2 to 3 and 4 to 5 ml per day. Clearly, we need a more precise estimate for how many more puffs the average vaper has than the average smoker does, but even if the assumption is over three times as many (which seems pretty unrealistic), the unadjusted results from this study suggest that smoking is still worse for the lungs.

Conclusion – E-Cigarettes are Safer than Tobacco, but the Media Doesn’t Care

Fascinatingly, this study doesn’t seem to have garnered the same media response as previous, similar studies comparing e-cigarettes to air, and the reason is pretty obvious. The findings show that e-cigarette vapor is both less toxic to cells and induces less oxidative stress than cigarette smoke: the findings are framed in a positive, reduced harm fashion appropriate to e-cigs. The results from the other studies pretty much showed the same thing, but without a comparison to cigarettes, the media were all over it, because it switched to focus onto e-cigarettes “not being safe,” rather than the crucial point of whether it’s better for a smoker to make the switch.

It’s hardly like anything has changed – this has been happening for years – but it yet again underlines how finding out about e-cigarettes through media reporting presents a misleading picture of their risks and benefits. The media are happy to tell you that e-cigs “aren’t harmless,” but when it comes to a realistic look at risks in comparison to smoking, nobody seems all that interested.