One of the biggest benefits of vaping is that it allows you to quit smoking without going through the unpleasant process of nicotine withdrawal. When you stop smoking, your brain is quickly deprived of nicotine. This wouldn’t be an issue, but as a regular smoker, your brain has already adapted to cope with regular influxes of nicotine, so if you don’t get it, you’ll experience irritability, difficulty concentrating, a low mood and other negative effects. This is what drives most smokers who try to quit to light up again, and why vaping can make a huge difference.

Finding out more about nicotine withdrawal and getting the answers to common questions – such as, “is nicotine bad for you?” and “does nicotine cause cancer?” – is essential for anybody considering switching to vaping to quit smoking.

What is Nicotine? Is Nicotine a Stimulant?

Nicotine is the primary addictive ingredient in tobacco. It’s an alkaloid that’s naturally found in tobacco, as well as in vegetables such as eggplants, potatoes and tomatoes in much lower quantities.

If you’re wondering “is nicotine a stimulant?” the answer is yes, but it’s a little more complicated than you might expect. Nicotine acts as a stimulant in lower doses, increasing your alertness and reducing your appetite, but in higher doses it acts more like a sedative, promoting relaxation and calmness. Smokers tend to take shallower puffs to get a lower dose of nicotine and a stimulant effect, and deeper puffs for a more relaxing experience.

One of the main benefits of vaping is that you can still control how nicotine affects you in this same way, by either vaping a little for a stimulant effect or vaping more for a sedative effect.

How Much Nicotine is in a Cigarette? If you look on the side of a packet of cigarettes, you might think you know the answer to “how much nicotine is in a cigarette?”, but it isn’t really as simple as this makes out. Nicotine makes up between 0.6 and 3% of the dry weight of tobacco, and the average cigarette contains about 10 mg of nicotine before it is burnt. However, on a pack of cigarettes, the figure cited is likely to be closer to 1 mg. So what’s going on? How many mg of nicotine is in a cigarette?

How Long Does Nicotine Stay in Your System?

There are many reasons to ask “how long does tobacco stay in your system?” or more precisely, “how long does nicotine stay in your system?” Getting tested for nicotine might be a requirement of your job, and it could be needed to work out how much your health insurance should cost. However, it’s also an issue you might be interested in to see how long you’ll experience nicotine withdrawal and to understand the nicotine withdrawal timeline. 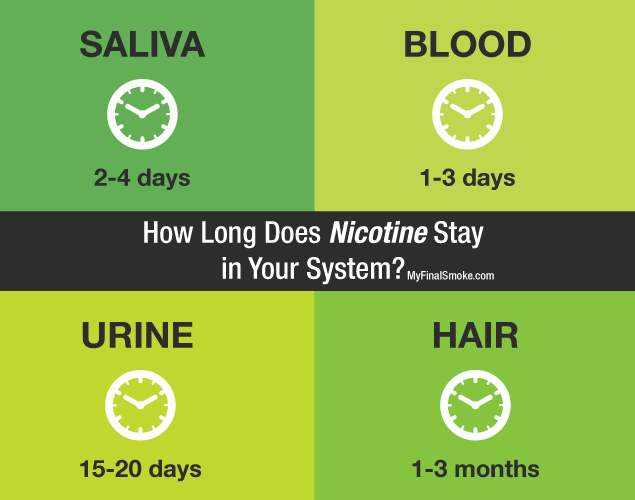 Firstly, the half-life of nicotine – the amount of time it takes the level of nicotine in your blood to reduce by half – is just two hours. This is why smokers tend to light up at least every two hours. However, if you’re being tested for nicotine, the answer depends on how exactly you’re tested.

So the answer to “how long does tobacco stay in your system?” isn’t quite as simple as you may hope, but for most purposes (aside from hair testing), the basic answer is three to four days. When you’re experiencing several nicotine withdrawal symptoms at once, alongside cravings, it can create quite intense pressure to smoke a cigarette. Overcoming or avoiding these withdrawal symptoms is essential to staying smoke-free, even if it means finding a safer source of nicotine. This nicotine withdrawal timeline isn’t universal – your experience could be different – but it gives you a general idea of what you’re likely to go through. Of course, if you vape or use another alternative source of nicotine, you’ll have a much easier time getting through the initial stages.

Does Nicotine Cause Cancer?

Nicotine doesn’t cause cancer, despite what many people assume. This is the most common misconception about nicotine, and it’s easy to see where it comes from. Because nicotine is the chemical most people associate with cigarettes, people are inclined to assume it’s responsible for the most notorious smoking-related disease.

But the question “does nicotine cause cancer?” has quite a clear answer. Decades of people using nicotine through smokeless tobacco and nicotine replacement therapy, and many studies conducted on these people, show clearly that nicotine is not carcinogenic. One notable example is the Lung Health Study, which followed thousands of people for over 10 years and found no link. Some studies suggest that large doses of nicotine may promote the growth of existing tumors, but it doesn’t cause them itself.

Is Nicotine Bad for You? Although nicotine is toxic in large amounts and can cause physical dependence, it poses little if any risk to your health on its own. There are many, many harmful chemicals in cigarette smoke, and these are responsible for the health consequences of smoking. The old adage says that smokers “smoke for the nicotine but die from the tar.”

When researchers study people who use nicotine patches, gums and smokeless tobacco, they find no cause for concern. People using nicotine without smoking aren’t more likely to get cancer than people not using nicotine, and they aren’t more likely to have heart problems either. Nicotine is also less addictive if you don’t consume it by smoking cigarettes. It isn’t completely and utterly safe, but the risk it poses is more like the risk from drinking coffee than the risk from smoking cigarettes.

“Is nicotine bad for you?” is a difficult question to answer, but overall the best response is “not really.”

Conclusion – Safer Sources of Nicotine Save You From Withdrawal Symptoms

If you’re hoping to quit smoking, nicotine withdrawal is the thing most likely to prevent you from being successful. But there are solutions to that problem. You don’t have to stop using nicotine to protect yourself from most of the health risks of smoking. Vaping is at least 95% safer than smoking, and gets you plenty of nicotine to help you avoid withdrawal. You’ll still need some willpower to kick your smoking habit, but it makes the toughest times a lot more bearable.