Our Aspire Cleito EXO review takes a look at the new-and-improved version of the classic sub ohm tank. They’ve taken the design in a new direction, but does the tank perform as well as the original? Is it worth $19.99? The Cleito EXO has some flaws, but it’s still a fantastic tank for anybody but hardcore cloud chasers. It’s leak-free, and at lower wattages the performance is excellent. If you’re looking for the very best sub ohm tank, shop around, but for $19.99 the EXO is a great deal. The original Aspire Cleito re-imagined the design of the sub ohm tank with excellent results. While most tanks have a separate atomizer head and chimney section, the Cleito combined them to offer a much more direct path from the coil to the mouthpiece. The result was astounding vapor production and impressive flavor, but Aspire hasn’t stopped there. As well as putting out the Cleito 120 – which shares a lot of design features with the original but supports higher-wattage vaping – they’ve now released the Cleito EXO. The differences here are much bigger in terms of design, with an impressive airflow system in particular, but does the tank perform well enough to compete? We’ve tested it out for our Aspire Cleito EXO review to find out. The Aspire Cleito EXO comes in a thin rectangular plastic case much like the original Cleito did. The tank is nestled in a cut-out section of foam towards the top and all of your extras towards the bottom, under a small flap with some basic information about the tank written on it. As well as the tank and the 0.16 ohm coil that comes pre-installed, you get an alternative 0.4 ohm coil, a spare mouthpiece and a couple of spare O-rings. The package is fairly basic, but it gives you everything you need so there isn’t much to complain about. The Cleito EXO is a bit of a departure from the previous versions in design. This is due to the exoskeleton-like metallic cover surrounding the tank. The metal surrounds much of the tank, aside from a couple of U-shaped windows on opposite sides of the tank which you can use to see your remaining juice level. The “Aspire” logo is written on both of these windows, but other than this and a couple of horizontal airflow slots at the top of the metallic sections, the tank has a uniform and pretty cool look.

Visually, the metallic body makes it a great fit for many mods, and you can pick it up in black, blue, bronze and a rainbow-like design in addition to the stainless steel if you have a preference. Overall, it does a great job aesthetically. The Cleito EXO has a pretty simple structure that’s similar enough to most sub ohm tanks that you’ll feel right at home. It’s a top-filling tank, so the top cap screws off to reveal the atomizer head and space around the sides to fill up. The atomizer head runs up the whole length of the tank, screwing into the bottom section and the top cap. The base of the tank is a little unusual, because the coil screws into a metallic ring that’s slightly raised up from the base, with airflow holes in the very bottom section. When you unscrew the top cap, you can simply pull the tank off the base without any need to unscrew anything.

The “EXO” part of the EXO is really all about the airflow system. Most sub ohm tanks simply have adjustable airflow slots at the bottom, which you can cover up, uncover or part-cover to set the airflow up to your liking. However, these can sometimes suffer issues with juice leaking through the slots. The EXO’s solution to this is ingenious, and is similar to that attempted on other devices in the past. The slots at the top of the metallic exoskeleton are there to suck in air, but they do so from the upper part of the tank. The air rushes down between the metallic covering and the glass tank, reaching the base of the tank and being pulled up through the atomizer head thanks to the airflow holes in the interior of the base. So the air flows down from the top and then up through the center, so it’s basically impossible to have any e-juice leak from the airflow holes.

This works really well overall, but the only downside is that you can’t adjust the airflow setting.

The Mouthpiece and Top Cap

The Cleito EXO has a wide-bore mouthpiece and a simple top cap with knurled edges to make it easier to unscrew. The mouthpiece works more like a sleeve, which surrounds a shorter, squat metallic tube extending from the top of the mouthpiece. The wide bore tips included with the tank are a great match for the open airflow of the EXO, but are another element of the design that isn’t ideal for mouth-to-lung vapers or people who prefer a restricted airflow.

The Cleito EXO can be used with coils for the original Cleito, but not the 120 version. This is a great extra feature for users of the old Cleito who may still have a coil or two around, and it also works with the RBA head for the Cleito too.

Aspire has done a pretty great job with the design of the Cleito. There are a few minor sticking points – the loss of adjustable airflow being the biggest – but overall the look is great and the tank is well set up to meet the needs of vapers. The 0.16 ohm coil included in the kit is notably fatter than the 0.4 ohm option, and it actually reduces the size of the tank from 3.5 ml to a TPD-friendly 2 ml. This means the Cleito can be sold in the EU in pretty much the same form, but since the coil is rated for 60 to 100 W, it’s a bit of an unfortunate combination with the smaller tank.

That said, the performance from the 0.16 ohm coil is great. It doesn’t do very well below the recommended settings because the ramp-up time is too high, but from 60 W upwards you do get good clouds and well-captured flavor. As you increase your setting to 70 W, the flavor comes through a lot better and the vapor production continues to improve. Things keep getting better for a while, but approaching 90 W leads to quite hot vapor that I struggle to vape for too long, and the improvements in vapor production and flavor start to die off. At 100 W the same issues really make it difficult to enjoy.

Overall, there is a nice range from 60 to around 80 W where the performance from this coil is great in terms of both flavor and vapor. Beyond that range in either direction you run into some issues.

This is a great coil for lower-wattage vaping, and a lot of the time I even run it at 35 W out of the house with pretty good results. The flavor isn’t quite up to the level of the lower-ohm coil, but it’s still good.

Airflow and the Cleito EXO

A more general point about the Cleito EXO relates to its airflow system. With no airflow control option available, you’re left with an open draw you can’t really do anything about. For most vapers, this won’t be a massive issue, but if you’re particular about your airflow settings it’s not ideal, especially if you like a restricted draw.

The design of the airflow system, while great for preventing leaking, means it also doesn’t do too well for people who like a wide open draw either. The gaps for air to pass down the body of the tank are quite slim, and this does have a notable impact when you’re trying to vape with the 0.16 ohm coil at higher wattages. There’s only so much you can draw in.

The biggest downside is for the temperature of the vapor at higher settings, though. It makes the highest settings on the lower-ohm coil basically unusable (at least for me). A secondary airflow system around the mouthpiece would have been a good idea to cool the vapor down and keep it enjoyable to use at more extreme settings.

That said, for most vapers the airflow system gets the job done well enough, and the benefits in terms of avoiding leaking arguably make the downsides worthwhile.

The performance from the Cleito EXO is really good unless you’re looking for huge clouds and very high wattage vaping. If you’re happy operating between about 40 and 80 W, the vapor production is solid and the flavor is good, but beyond that you’ll start to run into issues.

Aspire Cleito EXO Review: In Use

Filling Up and Changing Coils Filling up the tank and changing the coil on the Cleito EXO are the two most common tasks you’ll have to complete, but thankfully both are really easy to do. The top-filling design means that all you need to do to refill the tank is unscrew the top cap and fill up in the space between the atomizer head and the wall of the tank. This is really easy to do with the 0.4 ohm atomizer head, but it can feel a little cramped with the fatter 0.16 ohm head. In any case, though, you won’t have a problem with it, even as a beginner.

Replacing the coil isn’t much more difficult. Once you’ve removed the top cap, with the tank empty or close to it, you can pull the body of the tank off without unscrewing anything. This leaves the coil sitting in the base but makes it much easier to unscrew the one you have installed and get the new one in its place.

The only issue I ran into during refilling and changing coils is the atomizer head unscrewing while I was trying to unscrew the top cap. However, this is more to do with over-tightening the top cap than anything else – go easy on the top cap when you replace it and you won’t have problems.

Does the Cleito EXO Leak?

The unique airflow design might have some downsides, but the huge positive is that it means the Cleito EXO doesn’t leak at all. Throughout testing, I haven’t had any leaking; not even a drop. This might seem like something you’d expect from any tank, but in practice it’s very rare to encounter a tank that actually pulls it off. 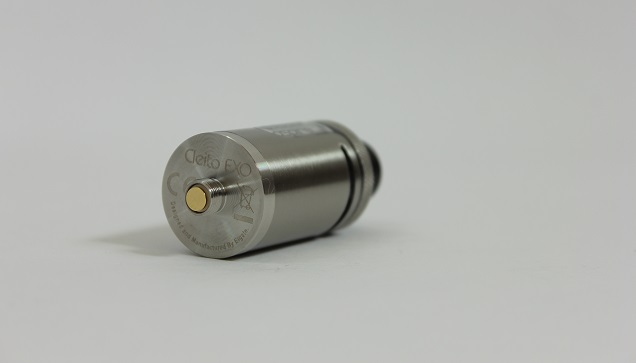 The Cleito EXO is really well put together. The metallic outer section gives it a sturdy feel, the knurling on the top cap is beautifully machined and all of the threading fits snugly and everything works just as it should. Once you’ve unscrewed the top cap, the tank section just pulls off, but the fit is still tight and reliable. Overall, there isn’t much to complain about here at all.

The Cleito EXO isn’t the perfect sub ohm tank. The airflow system is ingenious in some ways, but it’s inherently restricted design causes some issues at higher wattages. However, if you’re happy vaping at 80 W or lower – or if you don’t mind hotter vapor – it has a hell of a lot to offer. A completely leak-free design, great flavor, impressive vapor production and a really user-friendly layout makes it an absolute pleasure to use. It isn’t perfect, but it’s dependable and it does a great job of continuing the proud tradition of the Cleito devices. For $19.99, it’s a fantastic deal for an impressive tank.