Aspire Cleito review: this sub-ohm tank aims to build on the success of the Atlantis and Triton by re-designing the coils to do away with the need for a separate chimney section while still offering top-notch performance. But does it deliver? 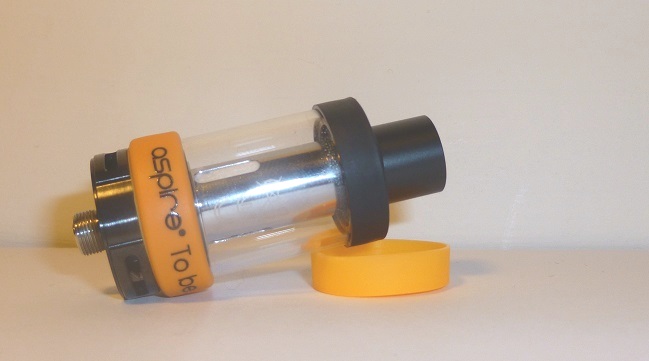 The Cleito is a well-designed, excellently-performing and user-friendly sub-ohm tank. Coupled with the great price, the tank is worthy of serious consideration for any vaper, whether new or experienced. There are a couple of niggling issues, but they don’t take away from the fact it’s an excellent tank. Sub-ohming was once the preserve of vaping enthusiasts, packing mechanical mods and building as low-resistance coils as possible to make up for a dearth of high-wattage regulated devices, but things have changed. Although regulated mods have pushed the wattage well beyond what was possible in the early days of the industry, sub-ohm tanks have definitively hit the mainstream, with so many options on the market that it’s hard to even keep up with the variety. The Cleito from Aspire is one of the newest entrants into this field, and it aims to surpass all of the available options with an intelligent bit of design innovation and a user-friendly appeal.

Aspire aren’t strangers to the sub-ohm tank game. The Atlantis and Triton are both well-loved tanks, and the Cleito aims to build on their success by re-designing the coils to do away with the need for a separate chimney section while still offering top-notch performance. Priced at $26 in steel or $28 in black, the Cleito sits comfortably in the middle of the pack when to comes to price, but does the tank itself perform well enough to stand out from the multitude of sub-ohm tanks on the market?

We’ve tested out the tank for our Aspire Cleito review to find out!

This tank was kindly provided to us for the purposes of this review by the lovely people at Heaven Gifts, but as always, our appraisal will be totally honest. 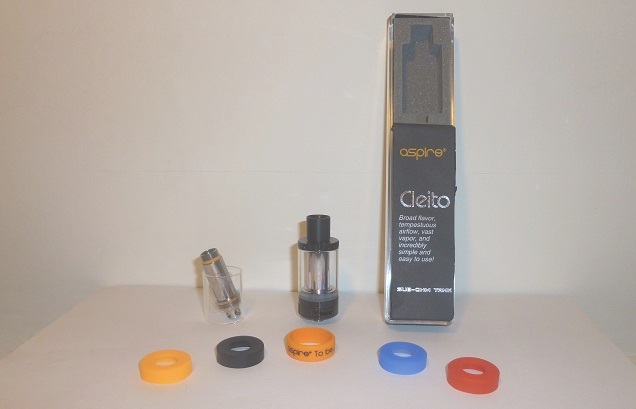 The Cleito comes in a neat, elongated plastic case, with a block of foam inside that has sections cut out of it for your tank, a spare Pyrex tube, a spare 0.2 ohm coil (alongside the 0.4 ohm one that comes pre-installed), a collection of four rubber cuffs (in different colors) for the top cap and a “vape band” with Aspire branding. It also comes with a wide-bore Delrin drip tip attached. Overall, it’s a good offering – fewer rubber cuffs and some spare O-rings or other accessories would have been better, though. The tank’s design is its major selling-point, hitting on all of the expected features in a modern sub-ohm tank but changing the design of the atomizer heads to improve performance. While the coils for pretty much every other tank on the market are short and connect to a central stem inside the tank as well as the bottom section, those on the Cleito have the chimney section built in, stretching right up from the bottom of the tank so the top cap screws directly onto them. This doesn’t impact the user-friendliness – you just screw the coil in place like you would with any other – but it does claim to offer improvements in airflow, better vapor production and improved flavor. The coils also have three oval-shaped sections cut out of the metal housing to expose the wick, which surrounds the vertical coil and allows plenty of space for your juice to soak up.

For the remainder, the design of the Cleito is comparable to most other sub-ohm tanks on the market. It has a 22 mm diameter and measures 58 mm from top to bottom (including the 510 connection and drip tip), and has a 3.5 ml capacity tank. The size of the tank might be a little low for some vapers, but personally I like to change flavors quite regularly so it works well for my purposes. The Pyrex tube attaches firmly to the top section of the atomizer, and the bottom is held in place with a thick O-ring. This might seem like an inherently unreliable design choice, but the connection is solid and it takes a fair amount of pulling force to detach the tube.

The most useful design feature of the Cleito is that it’s a top-filling tank. While most top-filling designs depend on small fill holes, the Cleito’s top cap comes straight off and leaves you with nothing but the atomizer head/central stem and the Pyrex tube to contend with. There’s no need to carefully angle the tip of your e-juice’s dripper cap so you can fill up without spilling some into the central portion – you can fill up accurately with absolutely minimal effort. The top cap has a series of shallow ridges cut out of the edge to make it easier to unscrew and tighten too.

And of course there’s the now-standard airflow control ring, which consists of three slots surrounded by an adjustable ring, allowing you to go from a wide open draw with the slots exposed to a fairly mouth-to-lung friendly (but not completely stinted) closed off setup. The Delrin drip tip measures just 12 mm (about half an inch) tall, with an inner diameter of around 11 mm, making it about as wide as it is tall, and creating an airier draw than with most devices.

The drip tip is more like an outer sleeve, though, attaching to a short raised section in the center with an O-ring on the outside to provide grip. While you can use other standard-size drip tips, they fit into the inside of the raised section, which produces a bit of an unusual appearance.

From a visual perspective, it’s quite non-descript as it arrives, coming in either stainless steel or black and having nothing cluttering up the look. The only branding on the outside is an “Aspire” logo over one of the airflow rings which is barely even visible on the black version unless you get up-close. The atomizer heads have more branding – a larger logo with “Cleito” written underneath, but when it’s partially obscured by juice it doesn’t really take away from the overall look. The silicone “cuffs” that cover the top cap come in several colors, but other than the black option that matches my tank they take away from the visual appeal a little. Aspire suggests using them to indicate what juice you have in your tank (you know, instead of just having a vape or sniffing the drip tip to see), or to color-coordinate with your mod, but the key reason seems to be providing some heat protection.

But overall, the Cleito does well on the design front, although more for functional reasons than aesthetic ones.

The open airflow, cotton-wicked coils and sub-ohm nature of the Cleito means it does excellently when it comes to vapor production. Even with the higher-resistance atomizer – stated to be suited to between 40 and 60 W, the vapor production is substantial, and with the airflow wide open and the power turned up, even cloud-chasers will be pretty satisfied with the Cleito’s performance. You could still do better with a dripping atomizer, but even as an RDA user myself, I’m more than happy with the vapor you get from the Cleito.

The flavor is also exceptionally clean and robust, easily matching rebuildable devices when it comes to taste. There’s nothing at all to complain about here – the flavor of your juice comes through perfectly, even for complex, multi-tonal flavors. The coils in the Cleito are actually Clapton-style, which likely has a big role to play in the great flavor and vapor production from the tank.

Overall, the Cleito does excellently in this area – the performance is consistently excellent. 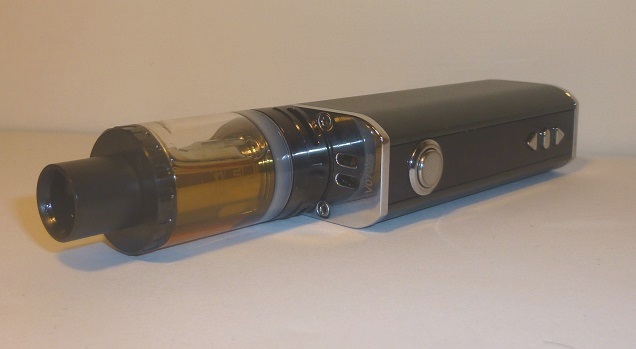 In day-to-day use, the Cleito comes into its own thanks to the simplicity of the device. The ease of refilling is the best example of this: it’s top filling (which is a great start anyway), but the amount of space to fill up when you remove the top cap puts it head and shoulders above much of the competition when it comes to ease of use.

Changing coils is similarly simple, with the atomizer head and chimney section screwing out easily and being accessible when you open the top cap. The only downside here is that you can’t really change your coil without also emptying your tank, but although this is possible on other tanks, it’s not a huge issue. The whole thing dissembles easily, though, so giving the tank a periodic clean is nice and straightforward.

That’s pretty much all you need to do with the tank in use, aside from attaching it to a device and vaping. That side of things works as well as you’d hope – the performance is top-notch and the tank is very dependable. The vapor production and flavor are consistent, and it works well even when there isn’t much juice in the tank, likely due to the extended, oval-shaped windows for your juice to soak up into the wick.

The airflow adjustment gives you plenty of control over your draw, but it must be said that it does favor straight-to-lung vaping rather than the mouth-to-lung that smokers will be used to. Closing off the airflow as far as it will go gives you a fairly tight draw that works reasonably well for mouth-to-lung inhalation, but it gets quite airy very quickly because of the three airflow slots. Since you can’t close off one or more of them, a small increase in the airflow setting makes a big difference to your draw. For lung-hitters, though, it’s ideal, and the wide open setting gives huge airflow and a very smooth, whooshing draw.

The biggest problem with the Cleito in use has already been addressed by Aspire. Without one of the “cuffs” attached to the top cap, the short length of the drip tip means that your mouth makes contact with the top cap in use, and it gets quite hot in use. It isn’t too hot – you could probably tolerate it if you had no option – but it definitely detracts from the experience. Adding one of the cuffs completely eliminates this issue, and is undoubtedly the only actual reason they included them with the tank.

There is a small amount of leaking from around the airflow slots, but this is really minimal and becomes more of an issue when your coil is approaching the end of its lifespan. The coils last quite a long time, easily giving me a week’s worth of use – although I vaped other devices too – before the coil started to suffer in terms of performance.

Overall, the Cleito does a great job in use. It’s exactly what you want from a tank: simplicity of use and excellent performance all-round, with only minor criticisms holding it back.

The high-quality materials Aspire used for the Cleito – a stainless steel body, Delrin drip tip and Pyrex tank – are well-supported by generally excellent manufacturing. The pieces all fit together snugly, the airflow control ring is sturdy without being too hard to adjust and the coils are well-made. No complaints whatsoever here.

The Aspire Cleito is a straightforward sub-ohm tank that performs excellently, balancing user-friendliness with stand-out flavor and substantial vapor production. For vapers just getting into higher-quality devices, it’s hard to beat thanks to the simplicity, and even long-term vapers will be blown away by the performance. There’s also a rebuildable atomizer head coming out soon, which will undoubtedly improve the offering even more for dedicated vapers. The downsides are generally only minor issues, with things like the inability to change coils with juice in your tank being slightly irritating but easy to work around. For the price, the Cleito is a fantastic sub ohm tank that’s hard to beat.