The Zenesis Twenty-Four is one of only 24 ever made by the modder Zen. It’s a 24 karat gold nano-plated titanium hybrid APV that includes his popular Z-Atty. 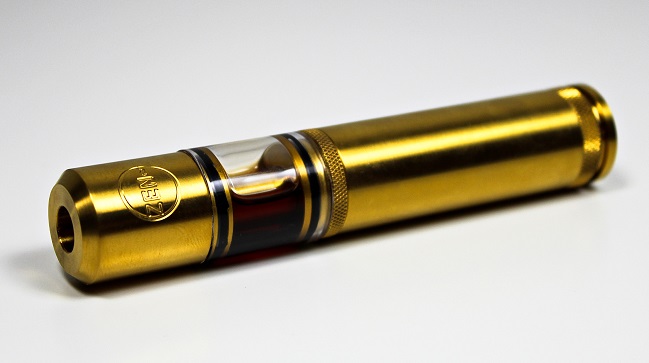 The Zenesis Twenty-Four isn't something you can just go out and purchase or get on a waiting list for. Only 24 were ever made available to the public. However, it is still worth reviewing, at least to prove that it really is scratch resistant and quite possibly the hardest hitting 18350 hybrid ever made.

Like the iHybrids, all Zenesis APVs are made here in the USA by a modder named Mike Morgan, commonly known as “Zen”. The company has been manufacturing and wholesaling mods and atomizers since 2011 and is based in New York. Recently, I was fortunate enough to grab Zen's most limited offering since the original Zenesis. The Zenesis Twenty-Four was released and only sold at this year's Vapetoberfest in Long Beach, CA and only 24 were ever made. After staring at it for the past couple months, I finally decided to build a coil on it and review it. Whereas most electronic cigarette kits and mods come in some sort of box, Zen traditionally packages Zenesis products in a clear plastic tube. Even though it is an extremely rare hybrid, the Zenesis Twenty-Four is no exception. Inside the tube is a foam cylinder which safely houses the mod capped off by two foam packaging peanuts. And Surrounding the cylinder, visible to the outside of the plastic tube, is a piece of paper with the House of Hybrids Zenesis Twenty-Four branding printed on it. The packaging for the Twenty-Four limited edition hybrid is actually quite simple but effective. I've always liked the look of the Zenesis hybrids. There's just something aesthetically pleasing about the tank section in between the battery tube and that stunning Z-atty top cap engraved with the Zen logo. It's simple, yet stunning. Top to bottom, the Zenesis Twenty-Four is a work of art. The knurled atomizer base and bottom switch create a touch of elegance for something typically designed out of functionality. And what can I say about the nano-coated gold plating? Brushed or polished brass almost always looks good to begin with. But this gold finish has yet to lose its luster.

Aside from some initial slight squeaking of the threading when attaching and removing either the atomizer or switch, the build quality on the Zenesis Twenty-Four is phenomenal. There is no leaking from the tank as the quartz glass has an air-tight fit over the o-rings.

The engraving on both the atty cap and bottom switch is flawless. 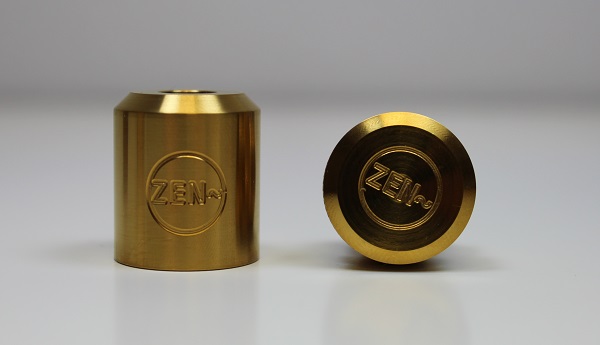 Best of all, the gold nano-plated titanium is touted to be scratch resistant by Zen himself. However I haven't gone much past a light attempt at scratching it with the tip of a Phillips screwdriver. And that squeaking that I noticed when I first took the Z-24 apart: it goes away.

Here's where the Zenesis Twenty-Four, and all Zen hybrids lose some points. I know it's set up to prevent arching, but I'm just not a fan of battery rattle. On a typical bottom-firing mechanical mod, the battery is held in place by a spacer while the contact point on the switch is raised when the button is pushed. The mod then fires when the switch bottom contact point hits the negative end of the battery.

With the Zenesis Hybrids, the battery is constantly in touching the bottom contact, unless the mod is turned upside down. When the button is pressed, the battery is then lifted until it touches the top contact on the positive end, creating the connection. According to Zen, this “reduces contact arcing making the PV less prone to the constant cleaning caused by the buildup of carbon… To remove the rattle would result in the bypass of this function.”

However I've never had any batteries arc when they are held in place with no rattle, but to each his own. I doubt this affects performance of the Zenesis Twenty-Four as I will discuss right below. Other than battery rattle, the Zenesis-24's functionality is pretty straightforward. It's a hybrid so a 510 connector is replaced by the actually positive contact. And there is one wick hole with a removable insulator and one tiny fill hole on the atomizer deck.

To set up the Z-Atty I removed the insulator on the atomizer deck, made a basic stainless steel mesh wick, and wrapped it with some 30 gauge kanthal (4 wraps). The coil came out to about 1.0 ohms. Usually, I would drill out the air hole on the atomizer cap but in this case, I left it alone. I just can't bring myself to alter something this one of only 24 in the world. And it's already set at 1/16″ and I'm only using a single coil so there isn't much of a need to go bigger. After spending a good deal of time working out the hot spots, I fired it up with some 12mg/ml apple pie flavored juice. On an 18350 battery fully charged to 4.2 volts, I tested and got about a 0.6v loss with each fire. This seemed a bit high but I guess that has a lot to do with the battery's size and not the mod itself. Still, the Z-24 hits pretty hard with a lot of flavor and a surprising amount of vapor for a single coil.

If you weren't lucky enough to get your hands on one of these magnificent pieces at Vapetoberfest, well I wish you well finding one. I would consider the Zenesis Twenty-Four more of a collector's item and not something I would use on a daily basis. Even though it is scratch resistance, I probably wouldn't carry it around in my pocket either. But the way Zen hyped it up at Vapetoberfest leaves me wondering just how well it would perform in 18650 mode. If only he made an 24k gold nano-plated tube for it! Oh well, I'll just have to gloat in the reality that I just vaped one of the rarest mods ever made.