VPark isn’t the biggest name in the industry, but they’ve added a pretty solid contender to the growing list of powerhouse box mods in the form of the TC100. But is it worth the investment? The TC100 is a solid box mod, with a great layout, user-friendly operation, excellent performance and ample power for most vapers’ needs. It may be a little big for some vapers, and the price could be a little better, but for a high-end box mod it’s a great offering. 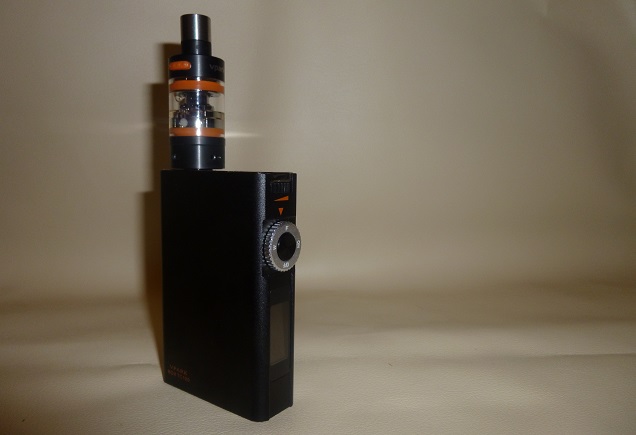 High power temperature control box mods are quickly becoming the staples of vaping. Striking a balance between portability, long battery life and substantial power output, they’re undoubtedly one of the best ways to vape. The only problem is that means tons of manufacturers are trying to get a piece of the pie, and choosing just one of them is becoming increasingly difficult.

VPark isn’t the biggest name in the industry, but they’ve added a pretty solid contender to the growing list of powerhouse box mods in the form of the TC100. The device boasts up to 100 W of power, temperature control and intuitive operation, and you can pick it up for just $80 from Heaven Gifts.

But is it worth the investment? Is it a knockout mod or just another in a long line of copycat box mods? We’ve put the device through its paces for our VPark TC100 review to find out. 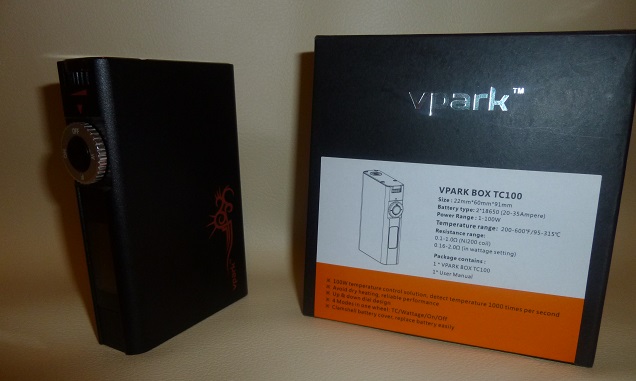 The VPark TC100 comes in a pretty bare-bones package. You get simple cardboard box with a single VPark logo and a sticker with the device’s specifications on it, along with an unintentionally hilarious user manual. “When the battery is at extreme temperatures or on fire, stop using the product” – yeah, thanks for that one. There are clearly good intentions hiding behind the broken English, though, and it definitely makes for enjoyable reading.

The TC100 is one of the “boxier” box mods on the market, but the rounded corners and sleek color scheme mean it gets away with it from an aesthetic perspective. The mod also has a cool design on one of the larger sides – it’s like the outline of a dagger in the style of a tribal tattoo – “VPark Box TC100” is written in unassuming letters on the opposite side. The overall impact is understated and cool. The mod’s fire button, screen and selection dials all occupy one edge of the device, making it pretty comfortable to use once you get used to the width. The fire button is right in the middle of the circular, four-point selection dial, and above that there’s a small dial to adjust your settings. The screen is excellent, too, displaying all the key information you need in a spacious, easy-to-read format.

The VPark TC100 takes two 18650 batteries, which are accessed through a simple door mechanism at the bottom of the device – you just flick a little catch back to open it up, and the correct polarity is indicated on the underside of the flap. There’s also a series of vent holes in the battery door to keep you safe in the unlikely event you have a problem with your battery. The dual battery element is great for performance and battery life, but that is what causes the potential issue with the width for vapers with smaller hands. The mod comes with a spring-loaded 510 connection, so it works with the vast majority of atomizers on the market. The TC100 also supports resistances down to 0.16 ohms in standard mode and 0.1 ohms in temperature control mode, so it’s perfect for sub-ohm tanks or low-ohm coil builds.

The TC100’s TC is obviously the main feature, letting you vape at anything from 200 to 600°F, with the option to dial in your own choice of wattage too. It supports nickel coils, but I haven’t personally used it with titanium, and it isn’t mentioned in the manual (however funny it is). The wattage goes up to 100 W in 0.1 ohm increments, and down to just one lonely watt. (I tried ‘vaping’ at one watt. Nothing happened) The LCD display screen is the best feature it has, though. It’s a definite step up from OLED, and gives you a handy at-a-glance rundown of everything, including your battery life in percent, much better than those little battery icons. Your resistance reading is displayed to two decimal places, and you can see both your temperature and your wattage easily (depending on your chosen mode).   Other than that, the mode selection wheel is the main feature, but you get all of the standard safety features too: low voltage, low resistance, short circuit, reverse battery and high temperature cutoffs.

Overall, the VPark TC100 has a fairly basic set of features but it does everything you need it to, so no complaints in this department at all.

The TC100’s fairly standard offerings come together well in practice. The controls are really intuitive, and the combination of the main wheel to select your mode and the smaller dial to adjust your setting works really well. The selected setting is also surrounded by a border on-screen so you can see at a glance what you’ll be adjusting. The other two settings on the wheel are just “on” and “off,” with “on” seemingly being the same as wattage mode. Changing the settings in tiny increments of 0.1 W might sound like it would get a little annoying, but you can hold down the dial and the scrolling speed increases, so you can make big changes pretty easily. It’s quite easy to overshoot your intended setting when you’re doing this, but you get the hang of it quite quickly. For temperature control, you can switch between Fahrenheit and Celsius by scrolling left until you reach 200 °F and continuing, which takes you to the upper end of the Celsius scale. To change back, you do the same thing again.

Finally, when you change your atomizer or install a new coil, it asks you if it’s the new coil or the same coil, and you move the dial in the indicated direction to let it know. The upshot is that the TC100 is about as easy to use as they come. When it comes to performance, the VPark TC100 is excellent. It’s very responsive, and with such a wide range of power settings available it obviously packs a huge punch. Although I’m not one to vape at super-high wattages, I tested it out at 100 W and it works perfectly, being happy to fire properly without resorting to pulsing. The battery reading sometimes jumps down a little when you push the power settings higher, though, but it usually creeps back up when you turn it back down.

The temperature control works just as it should. For me personally, I like it to ramp up at fairly low wattages (30 W or so), so the fact you can set it to whatever you like makes the TC100 great for my needs. The device supposedly performs 100 checks per second, and although that’s not something you can really verify, you don’t really notice huge gaps in firing like you do with the iStick TC 40W, for example, so it seems to make a difference.

Changing batteries is a straightforward process too – just flick the little catch on the battery door and it’ll swing open. The opening mechanism isn’t the best – it’s a bit too fiddly, particularly when you’re closing the battery hatch – but it definitely does enough to get the job done. The right orientation of the batteries are clearly shown with “+” and “−” symbols on the underside of the hatch. A charging port would have been a nice addition, but most mod-using vapers will have a battery charger, so it’s not a huge issue.

The size of the mod may be a downside for some, but if you’re looking for a high-power mod it’s right in line with the other options, and the width is a bit of a necessity since the device takes two batteries. Plus, it’s still portable enough to carry around in a pocket or bag, and with the wheel set to the off position there’s no risk of accidental firing.

Even if you don’t turn the power off, the screen switches off after a minute or so of not being used to conserve power, but everything comes back up when you press the fire button or change a setting. It remembers your previous settings when you switch the power off, too.

Overall, the VPark TC100 works great in use. The size is really the main downside, but you get used to it so quickly that’s it’s not a big deal at all, and many would see it as worthwhile for the substantial power output.

The TC100 is really quite simple when it comes to the build. The device is metal and sturdily put together, and both the mode wheel and the adjustment dial work just as they should. The threading for the 510 connection also seems great – everything fits in nice and snugly with no issues whatsoever during testing, and no connection issues either. The little catch for the battery compartment is the only area where it seems the manufacturing could have been a little better, but even then the design takes a large part of the blame. If you're looking for other devices similar to the TC100, check out this list of the best box mods and mechanical mods that was voted by the community.

The TC100 is a solid device, accomplishing everything it sets out to with understated style. With temperature control, a huge power output, intuitive operation and a clear, well-presented display, there’s very little to complain about. The only potential issue is the price, since you can pick up comparable devices for a little cheaper, but if you’re looking for 100 W of power and temperature control it’s still a good deal. It would have been more beginner-friendly if the batteries had been in-built, but as a device for the dedicated vaper, it’s well-worth considering.