Our VFOLK Pro kit review puts the pod-style e-cigarette to the test: is it a great option for just-switching smokers, or are there better options out there?

The VFOLK Pro performs really well and is a great option for smokers just switching to vaping. Longer-term vapers might prefer something refillable, but if you’re wanting to vape as simply as possible while still being satisfying, it’s a solid device. The rise of pod devices in the vaping industry isn’t showing any signs of letting up. A few years ago, JUUL was pretty much the only game in town, but now there is a huge selection of devices that follow the same basic formula and are great options for your first e-cigarette. With options like the Smok Nord on offer if you want to be able to refill the pods with any e-juice or just switch your coil without buying a new one, middle-ground options like the Starss Icon and simpler devices like the Brez, which come with pre-filled pods and allow you to simply push one in and start vaping. The VFOLK Pro follows this simple format, with pre-filled pods available in a selection of flavors and a clear focus on the needs of newer vapers. But the basic kit costs $29.99 (or $36.99 for one with two pods), so is it worth the investment? We’ve taken a look for our VFOLK Pro Kit review to find out. 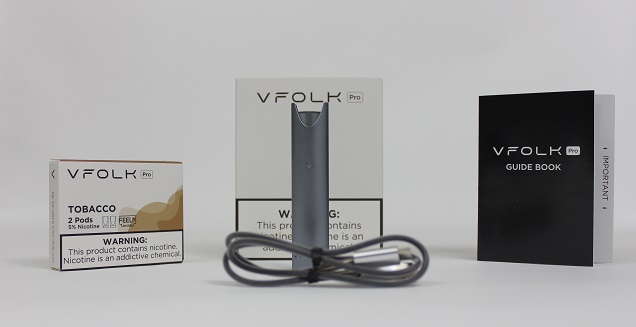 The VFOLK Pro kit comes in a small cardboard container, with the logo and a picture of the device on the front and some warnings and the contents of the box listed on the back. Inside, the device sits inside a cardboard insert, and the USB cable and a basic instruction manual sits underneath. The device-only kit is pretty basic, though, so we’d recommend picking up the slightly more expensive version that comes with two pods (in either tobacco, mint, coffee or mango flavor) so you have everything you need to start vaping with the VFOLK Pro. The VFOLK Pro has a vaguely JUUL-like appearance, with a pen-style design with a battery section towards the bottom and a space in the top for the pod. The device has an eye-shaped profile, with the “VFOLK” logo on the bottom of the battery section and a V-shaped LED light just below the pod connection. The USB port is on the bottom of the device, so this doesn’t interfere with the look of the device at all. The pod connects to the body of the device in another V shape, with the cut-out upper section of the body matching up perfectly with the protruding section on the pods.

The device also comes in a choice of eight colors: red, pink, gold, green, blue, purple, gray and black, although each has some extra descriptors attached. For example, “red” is really “Scarlet Ruby” and my gray version is “Space Gray.”

Overall the device does look fairly similar to the JUUL in broad terms, but it’s unique enough to stand on its own.

The connection-point for the pods on the VFOLK is completely magnetic, so you don’t even have to really push the pods into place to get them securely fastened. This is well-accomplished, though, so it’s as easy to take them out as it is to put them in place. The base of the pods has a metallic base section to support this, and you can see the two gold-plated connectors on both the bottom of the pod and inside the space at the top of the device. The pods for the VFOLK Pro are pretty straightforward if you’re familiar with pods for other devices already. They’re completely enclosed, with a mouthpiece at the top with a hole in the middle, leading down to the coil section on the inside and an airflow hole at the bottom. You can see the juice inside, so you always have a rough idea of how much juice you have left at a glance. They taper in a bit towards the mouthpiece section at the top, and the eye shaped profile makes it a more comfortable fit between your lips too. They have a capacity of 1.2 ml.

They come in packs of two, sealed in foil for freshness and with little plugs covering the mouthpiece and the airflow hole in the base of the pods. So they’re both comfortable to use and come well-packaged and covered to prevent any leaking in transit.

The only remaining design features of the VFOLK Pro are the simplest: the V-shaped LED light and the USB charging port. The LED works pretty much like you’d expect, lighting up white when you’re taking a puff and during charging, flashing red to either show low battery or that you’ve puffed for too long, and green to show when charging is finished. This is pretty much intuitive but it’s explained in the (very short) manual anyway.

The USB port sits on the bottom of the device, and it’s slightly recessed so you don’t have any issues standing it up when you aren’t charging. The cable is pretty good too, long enough to support vaping while charging and with a textured design that doesn’t really add anything but is quite cool nonetheless. The VFOLK Pro has pretty solid vapor production overall. You shouldn’t expect huge, mod-like clouds, of course, but in comparison to the other pod-style devices on the market, it’s really quite hard to fault. It has automatic operation – so you just puff to vape – which means that you have to give it a few short, “priming puffs” to get the best performance out of it, but when you do the vapor production is excellent. It’s easily in line with some of the better vape pens on the market, and while some pod devices do a little better than it, you definitely won’t be disappointed with what it can do.

There is a good reason many vaping devices switched to “manual” (push a button to vape) rather than “automatic” (puff to vape) operation: the former is much more reliable and generally leads to better performance. But automatic devices do replicate smoking more closely, and many pod-style vapes have chosen to go with the traditional approach. The VFOLK Pro does a great job making automatic operation work well with the device. You don’t have to puff really hard to get it to respond and it starts vaporizing the juice in the pod immediately, so there are no problems at all with how it works in practice.

Broadly speaking, you get great flavor from the VFOLK Pro pods, with each offering a solid punch of the intended taste. However, the best way to get an idea of what they taste like is to look at the different options individually and how well they match their intended flavor. There are also three other pod flavors available from VFOLK:

VFOLK Pro Kit Review – In Use The VFOLK Pro has a 350 mAh battery, which may seem small compared to non-pod devices on the market but is really more than enough to keep you vaping happily with the device. In testing, a full charge of the VFOLK Pro lasted me through a pod and a quarter’s worth of juice, so roughly 1.5 ml of e-liquid. When you bear in mind that these are rated for 400 puffs each and come with 5% nicotine salt e-juice as standard, it’s clear that this is really great performance, enough for almost a full 24 hours of vaping for me. If you’re just switching over from smoking, you’ll probably vape a bit more often, but a full charge will still likely last you for a full workday of vaping and potentially a little bit more.

Charging is really quick too, with the device going from being completely dead to fully recharged in around an hour. On top of this, it does support vaping during charging, which means you never have to go without something to vape even if it’s your only device. This is really excellent, and makes it a viable option for a just-switching smoker looking for their first taste of vaping.

The process of charging and the draining of the battery life could have been communicated better by the device, though. With the multi-color LED front and center, a switch from green to white (or even better, yellow) and then red as you were vaping your way through a charge to roughly show the remaining battery, and the reverse progression during charging, would have been a handy little extra. This is common on Smok devices, for instance, like the competing Nord. The VFOLK Pro could hardly be any easier to use. With pods that just drop into place and are ready to vape right out of the packet, and nothing else to do but to puff to start vaping, it’s pretty much foolproof even if you’ve never vaped before in your life. The manual only contains two pages with practical information on it (per language), and even then it’s written in pretty big type and only tells you stuff you could have worked out through just using the device. This isn’t a criticism, of course, it’s a testament to just how user-friendly the VFOLK Pro is.

The shape and size of the VFOLK Pro makes it a great option when it comes to comfort in-use and using when you’re out and about. The size makes it a great fit in your hand, and with no buttons to press that’s pretty much all you need from the device. It’s also slim and you won’t have any issues carrying it around in a pocket or a bag – there are smaller, more portable devices around, but you’re unlikely to really need anything more portable than this.

Does the VFOLK Pro Leak?

As with most pod devices, leaking isn’t really an issue with the VFOLK Pro. It boasts four levels of leakage prevention (the steel gasket at the bottom, the bowl-shaped atomizer, the O-ring around the base and a threaded bottom seal for the pod) and so it shouldn’t be a surprise that you won’t notice leaking with the device at all. You might notice a small amount of condensation around the pod connection, but this is really easy to wipe up and is barely noticeable anyway.

The VFOLK Pro is really well-made. The pods slot snugly into the slot at the top of the battery, the USB cable fits securely into the port at the bottom and the pods themselves are well-made and sturdy. It’s pretty much impossible to fault.

The VFOLK Pro is a fantastic option for new vapers that want something simple and satisfying that doesn’t miss the mark in terms of performance or cost too much. While some slightly more complicated devices offer better value (because you can refill pods and replace the coil when one dies), for maximum simplicity, the $36.99 price-tag on the kit and the $11.99 price for the replacement pods isn’t a bad deal at all, and still comes in much cheaper than smoking. The performance is great, the flavors are all pretty good and the device looks cool too. If you’re happy with something more hands-on, there are better options out there, but if you want something where you just pop the pod in and vape, it’s one of the best options around.