Our Vaptio Ascension S150 review takes a look at the mod boasting “accurate temperature control” – is this the future of TC vaping, or does it fall down flat in practice? The Ascension S150 is a disappointment. The mod itself could be a passable device, but the only unique thing it offers – accurate temperature control – is dependent on the tank, which has poor vapor production and isn’t especially flavorful. Despite the great price, this isn’t recommended. 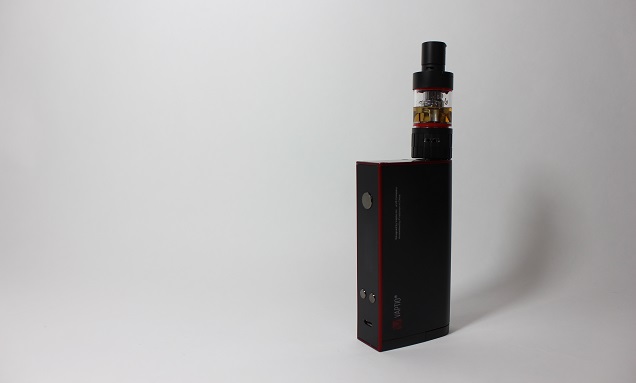 Standing out as a manufacturer in the vaping industry isn’t easy. With so many different companies and so many different devices on the market, there are more companies like Vaptio and more devices like the Ascension S150 than most of us would even realize – vastly more than there are the Joyetechs and Kangers of the world. But that doesn’t mean that Vaptio’s Ascension is a bad device, and given that it boasts up to 150 W of power, accurate temperature control and a dedicated tank, all for $65, it does have a lot going for it on paper. Does that translate into being an awesome device in practice? We’ve put the device to the test in our Vaptio Ascension S150 review to find out.

The Vaptio Ascension S150 was provided to us for the purposes of this review by Heaven Gifts. As always, what follows is a completely honest appraisal of the device. The Ascension S150 comes in a basic box containing the device, a tank, a spare 0.4 ohm coil (in addition to the one already installed in the tank) and a USB charger. This is a fairly bare-bones offering, but offers all of the key stuff you need to get started aside from batteries and e-juice. The Vaptio Ascension S150 is a dual 18650 battery mod, so it’s a pretty hefty device, measuring around 53 mm wide by 96 mm tall by 25 mm thick (or 2 and 1/8 inches wide, 3 and 3/4 inches tall and 1 inch thick). The device has great aesthetics, with a black body and red trims around the edges, making for a sleek look overall, especially when combined with the curved back edge. There is a bit of branding on the body of the device, but it doesn’t impact the overall look too much.

The display screen is on the flattened front edge, with a circular fire button above it and two smaller circular adjustment buttons below. There’s also a USB charging port below the adjustment buttons, which sits flush to the front face so it doesn’t detract from the overall appearance. The 510 connection sits above the back, curved edge of the mod and has a small trench surrounding it to help prevent any leaks from finding their way into the connection point. Atomizers don’t quite sit flush to the mod, though, and generally the threading feels a little too tight. The slot for your batteries is nicely designed, though, with a cap that slides outwards before flipping open and revealing two perfectly-sized spaces for your batteries. Although it seems like you have to push the batteries too much to get the cap closed again, it definitely keeps everything in place. What’s missing, though, is vent holes. This isn’t technically necessary, but in the unlikely event that you have a serious problem with your batteries and they release hot gas, there is nowhere for it to escape from the Vaptio Ascension S150. This is a pretty huge (and baffling) flaw, and in a disaster situation, it could make the difference between the battery venting and just possibly burning your hand and going full hand-grenade on you. The accompanying tank is a fairly standard offering, with a bottom-coil arrangement, an airflow control ring with options for two slot sizes, a wide central chimney and an additional airflow slot in the wide-bore drip tip which allows you to cool the vapor to your liking. The best feature on the tank is the top-filling design, which works through a small flap which swings open on the top cap. This reveals a small hole for refilling, which works well with glass drippers but is a little too small for the thicker plastic dripper spouts you get on some bottles. Overall, though, this is a nice feature that makes refilling much simpler in most cases.

On the whole, despite some limitations, the mod and tank are very well designed, with a great appearance and some well-executed little features. The main feature of the Ascension S150 is the huge range for the variable wattage, allowing you to set the power anywhere from 1 W to 150 W, which is a solid offering and enough to please everyone from the lower-power vapers right through to the dedicated cloud-chasers.

It also offers the standard-style temperature control with nickel, titanium and stainless steel coils. In both the standard TC and ATC modes, it supports the usual range of temperature settings, ranging from 200 to 600 °F or 95 to 315 °C.

Other than that, the features on the Vaptio Ascension S150 are fairly limited, with the standard selection of safety features like low resistance protection (for anything under 0.1 ohm for VW or ATC mode or 0.05 ohm for normal TC mode), low battery protection and more. Although the feature-set is limited, the Ascension S150 does do everything you need it to, and the ATC mode is a nice addition, so there’s really not much cause for complaint.

So the device might be well put together and have a passable collection of features, but how does the Ascension S150 stand up in practice?

Getting everything set up and ready to go is pretty easy, largely thanks to the top-filling design of the tank and the mod’s simplicity. You simply open up the filling port beside the drip tip, add your juice and then either insert your batteries or press the mod’s fire button five times to switch it on. After your juice soaks into the coil, you either press the “fire” and “up” buttons together and hold them down to change modes or just adjust the wattage to your liking, and you’re ready to go.

The performance is pretty disappointing, though. The vapor production is weak in both temperature or wattage modes, seemingly due to the tank’s airflow, which feels oddly restricted even at the most open setting. You turn up the wattage or the temperature to compensate, but when the vapor production is good enough, the drip tip heats up and quickly gets uncomfortable to use. The result is a pretty unsatisfying experience. The flavor is good (though not great), but I found the airflow so restricted that it was hard to really enjoy it.

The ATC works quite well, but again due to the airflow it isn’t really satisfying until you reach pretty high settings. Honestly, you get better performance if you just use the ordinary TC with a better tank – the benefit of having an actual sensor is negated by the fact that the included, compatible tank is terrible.

The same lesson largely carries over from this to the whole setup. The mod itself, divorced from the tank, isn’t really too bad. It has a nice design, the battery life is great, the power output is really good, and the simple operation is a welcome change from complex options with deep menus to navigate.

But the mod isn’t perfect either. After a couple of minutes without using the device, it goes to sleep and has to be woken by a press of the button. This might not sound like a big deal, but it’s the sort of minor annoyance that crops up so often that it gets more and more irritating with time. You pick up the device and absentmindedly press the “fire” button to vape, only to have nothing happen, and then remember you have to press again to actually vape. You remember every so often, but it still occasionally catches me off-guard even after using it for a while.

The device also automatically sets itself to 75 W when you switch it on. This might be fine if you’re a hugely high-wattage vaper, but I’m not, and for vapers like me this just means you have to scroll down to a suitable setting every single time you switch on. If like many other devices, it just remembered your last setting, this annoyance would be entirely removed.

When you throw in the tank’s issues on top of all this – and a bit of leaking for good measure – it becomes obvious that this isn’t the sort of setup you’ll want to be using on a regular basis. It’s both unsatisfying and persistently irritating, and although to mod could stand on its own two feet, it’s hard to see why you’d get that rather than another device. The lack of vent-holes is a big clue that the manufacturing of the Ascension S150 isn’t quite up to scratch. Although it was rectified later – after I was screwing on an atomizer and heard a disconcerting crack – when I received the device no atomizers would sit flush to the surface. The battery door also closes down on your batteries a little too tightly for comfort. Overall, there are no major problems, but a few minor ones.

Overall, I was distinctly unimpressed with the Ascension S150. The tank is really the biggest downfall of the kit, but the mod itself doesn’t have anything in particular going for it either, so it’s hard to recommend it on any grounds at all. If you have any other device, you’ll quickly relegate the mod and (especially) the tank to your “never-to-be-used” shelf, and if you don’t have another device, you’ll either be tempted to give up on vaping altogether or you’ll be shopping for something better within days. In a nutshell: don’t buy this.