Offering up to 50 W of power and being happy to fire any coil down to 0.2 ohms, the VaporFi Vox 50 has a lot to offer vapers. However, with an RRP of around $50, does it really do enough to justify the price? The Vox 50 does just what it claims to: pushing an unholy ton of power to your coil and producing a robust vape, even on low-resistance coils, making it a fantastic device for RDAs. The main issue is the high price, since comparable devices are available for less money. Many VV/VW mods don’t let you go too power-crazy. Box mods like the iTaste MVP, iStick and Joyetech eGrip 2 cap you at anything from 11 to 20 W, but the VaporFi Vox TC 50 aims to blow the competition out of the water by offering up to a massive 50 watts of power. However, the price is another matter, selling at an RRP of $48.75 and making the decision to pick one up a lot harder to make.

VaporFi is a subsidiary of International Vapor Group, the same company responsible for cig-a-like brands like South Beach Smoke and EverSmoke. VaporFi sees them evolving with the industry, putting out eGo style devices alongside mods like the Rebel II to maintain their share of the booming market. Whether they can accomplish this remains to be seen, but the Vox TC 50 still holds a certain appeal – despite its price. The question is whether it follows through on its promises, and we’ve put it to the test in our VaporFi Vox 50 review to find out.

You can pick up the VaporFi Vox 50 by itself or in a starter kit. When you get the device solo, you receive the device itself and a USB charger, but in the starter kit you also get a 30A, 2100 mAh battery (the Sony US18650VCT4), the Bolt RDA, some 30 gauge kanthal, a strand of silica, some spare O-rings, a cute little screwdriver, some spare screws and a drip tip. The starter kit provides everything you need apart from e-liquid, making it a fantastic offering overall, despite putting the price up to $149.99. It would be easiest to describe the Vox 50 as a box mod, but design-wise it’s more like a metallic 18650 tube mod with the internal circuitry attached to the side instead of adding to the length of the device. It measures 3 and 3/4 inches tall (95 mm), around 1 and 5/8 inches (42 mm) wide and around 7/8 inches (22 mm) back to front, roughly the same size as the iTaste MVP. It’s metallic silver in color, with a fairly subtle logo on one of the flat sides, a mini USB port on the other (with an LED beside it) and a fire button, up/down controls and an OLED screen on the opposite edge to the battery. Appearance wise, it’s pretty stylish, not making any bold decisions and ensuring that it looks cool with a variety of atomizers and tanks.

The Vox 50 comes with a standard 510 connection, but there is no eGo threading to allow the use of clearomizers. This isn’t such a big deal for most vapers, but competing devices like the MVP do have this capability, making it a minor negative point for the Vox. The connection is actually recessed into the body of the mod, visible through a circular hole on the top edge of the battery side of the device. 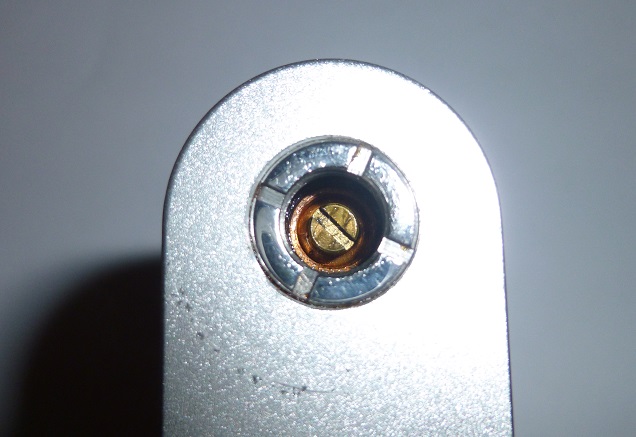 Here they had a nice idea: making the 510 connection adjustable. This means that if your atomizer doesn’t make a connection, you can raise the connection point a little to fix the problem. The screw loosens by turning to the right, which causes some initial confusion but is no issue once you’ve learned your lesson. The kits come with a spare screw in case you have any issues, too. The battery connection on the bottom cap has a similar idea, but it makes considerably less sense. The negative end of your battery connects to an adjustable contact point on the cap, which seems good in theory but in practice is just plain annoying. The connection point seems to slip downwards when you’re changing batteries (and sometimes when you aren’t), and often you find the battery not making contact as a result. Then you have to unscrew the bottom, raise the connection point (no tools required, at least) and try again. If they’d gone the same route as pretty much any other manufacturer and just used a spring, it would have worked without issues. This one point seems like their desire to “innovate” overtook their common sense; if it isn’t broke, don’t fix it.

The Vox 50’s main feature is the fact that it’s a freaking powerhouse, putting out anything from 7 to 50 W, adjustable in 0.1 W increments. Whether you really need to have quite so much precision is questionable, but thankfully you can scroll quickly by holding down the “+” or “–” buttons. The device will also put out a maximum of 8.5 V too, so even high resistance atomizers can be used with a wide range of power settings. The device has an ohm-checker built in – you just give the fire button a tap to make it detect the resistance.

There are also plenty of safety features, with built-in protection against short circuits, very low resistances, high temperature, overcharged batteries (anything over 4.2 V) and incorrect battery insertion. The bottom of the device is pocked with vent-holes too, with six on the bottom cap and another five near the internal circuitry. The OLED display screen also provides pretty much all of the information you need at a glance, with a display of the current power setting, your atomizer’s resistance, your output voltage and a crude display of battery level (a filled battery icon which empties as your remaining power decreases). It’s pretty much a DNA chip style display.

Finally, the fact that you can charge via the included USB cable is good news for anybody who doesn’t already have a charger. The LED beside the port changes from red to green when the battery is charged, and even though they don’t recommend vaping while charging, it is possible. Overall, the VaporFi Vox 50 gets the job done without unnecessary bells and whistles.

The VaporFi Vox 50 lets you fire any coil that comes out between 0.2 and 3 ohms – a fantastic range that will be more than enough for all but the most hardened sub-ohmers. In terms of amps, you’re limited to 22 A, which there is really no way to approach in pretty much any situation. With a 30 A battery (like the Sony VCT4 included in the kit), there’s nothing to worry about (a 0.2 ohm coil at 50 W would be about 15.8 A), but if you’re using a lower amp limit battery you have to be careful and use Ohm’s law. Using the recommended battery, the device won’t let you even approach the amp limit.

In Phil Busardo’s testing, the device consistently fired at too high a voltage on lower power settings – despite the stated minimum of 3 V, the lowest it actually fires at is 3.7 V. For higher resistances and higher powers, you’ll also run the risk of hitting the maximum voltage it will fire at, which is around 8.7 V. If you’re working at about 20 W, it’s reasonably accurate over a wide range of resistances, but it could definitely be better in this department.

The Vox 50 is a pleasure to use overall, despite a few minor annoyances. The size makes it one of the mods you go to automatically when you’re going out of the house; it’s comfortable to carry in a pocket or bag without taking up too much space. The mod fits snugly into your hand, and the buttons are easily accessible from a natural holding position. Combine this ease of use with the wide range of power settings and the amenability to various resistances and you’ve got a device you find yourself coming back to time and time again. 50 W might be a little excessive for everyday use, but having the option feels satisfying, regardless – it makes the device more than suitable for most vapers’ needs.

The problems are generally very minor. For example, the device doesn’t remember your setting when you change (or otherwise remove) the battery, putting you right back down to 7 W when you power it up again. Additionally, the battery level and resistance readings may vary from time to time, but a quick tap on the fire button ordinarily sets it back on track. Getting the adjustable battery and 510 connections to suitable heights to make contact but still have everything screw in fully is quite a challenge, although it isn’t really worth bothering unless you have some mild OCD tendencies spurring you on.

Aside from such minor irritations, there are no real complaints about the device in use. Your atomizers heat quickly and efficiently, you have all the key information you need on the display screen (with no menus to get lost in) and it’s intuitively easy to use without instruction. It might not be perfect, but you’ll hardly be disappointed with how it works.

The manufacturing on the VaporFi Vox 50 seems reasonably solid, and the performance is consistent. There were no problems in our testing, but there were some signs that this device wasn’t put together too carefully. One issue is the 510 connector, which can cause some minor fluctuations in resistance readings (as noted by VaporFi themselves) and may need replacing if you have issues – seeing your resistance jump up and down with each press of the fire button is a little disconcerting. This isn’t a particularly big issue, though, and it seems to be solved by lowering the connection point a little as well as changing to the included, more durable replacement screw.

A bigger sign of lax manufacturing is revealed when you press “Fire” and “+” or “−” together, which brings up either “Touch On” or “Touch Off,” two non-existent features clearly pointing to the fact that the chip was not designed for this device, nor was the firmware changed to make this less obvious. The implication is that the device uses a mass-produced cheap chip and sticks on some VaporFi branding before drastically raising the price. Still, there are no huge issues with the manufacturing, and you do get a 6 month warranty with the device.

To find similar devices, check out this new latest of the best mechanical and box mods.

The VaporFi Vox 50 is a good device, overall: offering a wide range of settings, consistent performance, compatibility with most atomizers, being happy to fire any reasonable resistance and doing well in terms of portability and ease of use. The only problem is the price: comparable 50 W box mods like the Pioneer4You iPV2, the Sigelei-50W and the Rogue 50W are all much cheaper, so it’s worth considering your options carefully. That said, as long as you’re happy to pay the price, the Vox 50 is a fairly solid device, and you’re unlikely to regret your purchase.