The VaporFi Rebel II Starter Kit features a telescopic regulated e-cig mod with the appearance of a high-end mechanical device. If you're in the market for more performance from an electronic cigarette, the VaporFi Rebel kit features some incredible power to satisfy even the heaviest of smokers and advanced vapers.

Mechanical mods have been all the rage in the vaping community for about a year now. In addition to the power potential they offer with customized atomizer builds, there's just an alluring appeal to a top cap that fits flush with just about any atomizer. However, 2015 has seen the return of the variable wattage mod and regulated DC-DC converters capable of producing an equal amount of power, if not more in some cases.

For those vapers who don't require an absurd amount of power, but still want the look and feel of a mechanical mod with the added safety of a regulated device, VaporFi (formerly known as Vapor Zone) has you covered. The VaporFi Rebel II Starter Kit features a regulated e-cig mod capable of producing more than enough power to satisfy even the cloud chaser.

Like all VaporFi starter kits, the VaporFi Rebel II is aptly packaged in a sturdy white and green cardboard box. On the outer shell of the box you'll find some VaporFi branding along with a screen print of the device itself. The top portion of the casing slides off to reveal the top layer of contents, which includes the Rebel mod along with a cartomizer tank nestled snugly in a white micro foam tray. Beneath that is another tray that contains a charger and two red batteries, one 18650 and another 18350, along with an instruction booklet. 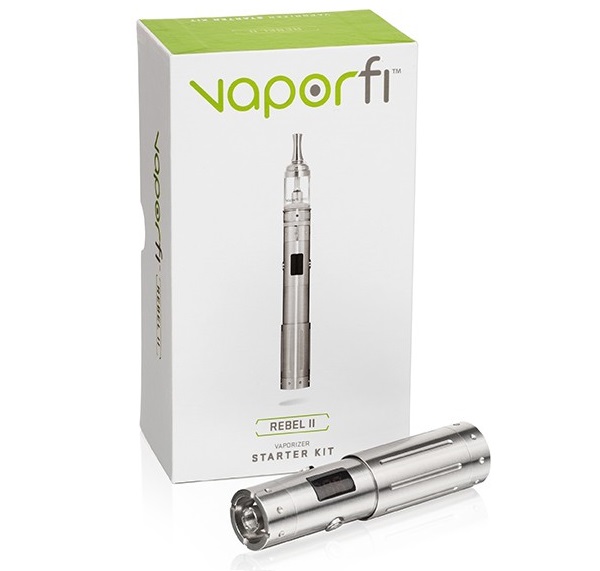 The VaporFi Rebel II e-cig mod is quite a sleek device, constructed of high quality stainless steel. It is telescopic in design, meaning the bottom tube can be twisted to adjust the overall length of the device. That tube is also machined with several vertical grooves to give the Vapor Fi Rebel a unique appearance.

The top tube is more simple in design, but contains all the goodies that make the mod work. It features a easy-to-use and comfortable button positioned directly below a rectangular digital display. Both the top and bottom of the device are capped with rings that are engraved with eight small nooks, adding the Rebel's aesthetic appeal. Best of all, the top cap is flat and a hair under 22mm in diameter, allowing for a flush fit with many popular rebuildable atomizers.

As already stated, the VaporFi Rebel II is machined from stainless steel with a matte finish, giving it a much more solid feel than most regulated e-cig mods. The tubes and bottom cap are also feature high quality threading that doesn't squeak when making adjustments or replacing the battery. Overall, the Rebel seems to have top-notch build quality that rivals some of the more high-end mechanical mods on the market. Because it is regulated variable wattage and voltage device, the Vapor Fi Rebel has some of the most technologically advanced functionality found in a widely produced e-cig mod. The digital display has eight different menus that allow for fine tuning of the vaping experience. Three consecutive clicks will bring up the first menu, which allows for voltage or wattage to be increased, depending on the mode the chip is set for. Four clicks brings up the second menu screen, which allows for decreasing the voltage or wattage. The third screen gives the option of turning the device on or off while the fourth will read how much capacity remains in the battery. On the fifth screen, the user is given the option to adjust the display when the Rebel is in use. It features three options to change from showing either the power output, atomizer resistance or remaining battery voltage. Eight consecutive clicks brings up the sixth screen which allows for the LED light to be turned on or off while the button is triggered during use.

Then there's a screen that gives the user the option to switch between variable wattage and voltage modes. In variable voltage mode, the output is adjustable from 3.0 to 6.0 volts, in 0.1 volt increments, while in wattage mode the power is adjustable from 3.0 to 15.0 watts, in 0.5 watt increments. No matter which mode you're in, the chip will self-regulate to provide a consistent output until the battery is fully depleted.

The VaporFi Rebel II vape mod is by far the best performing device in the VaporFi line of starter kits. It works extremely well with any cartomizer tank or clearomizer and can even be used with rebuildable atomizers so long as their resistance is at least 1.2 ohms. Once you get adjusted to the technology and functionality of the mod, the Rebel is pretty easy to use. With the voltage or wattage cranked up, you can also produce some decent-sized clouds and maximize throat hit.

VaporFi's Rebel Starter Kit is built for the more advanced vaper, but can also be perfect for the heavy smoker who just isn't satisfied with the performance of a smaller device. You just can't really beat the combination of technology and appearance with another device in the same category.