Our VaporFi Atom review puts the new flagship dry herb vaporizer from the company to the test. With a 3,000 mAh battery, three temperature settings and a great design to boot, it looks like a great device, but does it outperform the competition? The VaporFi Atom is a very capable dry herb vaporizer. It’s portable, dependable, easy to use, with enough temperature settings for most people and providing great flavor. It might be a bit of a Pax clone, but the price is great and the performance is hard to fault. There’s more to vaping than nicotine. Portable dry herb vaporizers are becoming more and more common, with tons of devices from the Arizer Air to the Magic Flight Launch Box on the market for people looking to move away from combustion. VaporFi isn’t new to this game. Their Stratus and Orbit vaporizers both ticked a lot of boxes, but the Atom looks especially impressive. With a Pax-like appearance, a long-lasting 3000 mAh battery, and three temperature settings so you can tailor your vape to suit your preferences, it’s a tempting device for $139.99. But does it get the job done? Can it compete with the big-name devices? Our VaporFi Atom review finds out. The VaporFi Atom comes in a basic box, but it contains everything you need. The device sits in a velvet-topped foam layer at the top, with the mouthpiece already attached. Underneath, you also get a couple of pipe cleaners, a metallic packing tool, a spare screen, a USB charging cable and the manual for the vaporizer. It’s nothing impressive, but enough to get you started with the Atom vaporizer.

The VaporFi Atom dry herb vaporizer has a really great look. It’s all black, with a uniform, tall, slim body and very little decoration to mess up the overall impact. The front side has a small circle of LED lights, with one in the center, and with these illuminated the look is just like the Pax (read our Pax 3 review for more info on that). There’s a micro USB port for charging and a single, circular button on one side, but other than that it’s completely bare. It’s another example of how vaping devices look better when they don’t try so hard.

The Atom vaporizer pen is really simple in structure. The bottom of the device contains the “oven,” where you heat up your material, and a tube runs up from this chamber to the mouthpiece section at the top. The oven is covered with a little oval-shaped door that’s held in place magnetically. The mouthpiece just stays in place through friction, and even though that means it comes out sometimes, when you do, you can stand the device up while upside down, so you can access the oven really easily.

The mouthpiece that comes with the VaporFi Atom is fairly basic, made from food-grade materials and rubber-soft to the touch. The straight version of the mouthpiece has the tip extending in the center, but the curved version has an L-shaped design, with the tip off to one side. The curved mouthpiece can be made to sit directly above the hole that leads down the device and to the oven section. However, the straight version still does a great job of funneling the vapor up to your mouth.

The oven section is where most of the action happens with the Atom. The chamber is big enough to hold a satisfying amount of dry herb, especially when you use the included packing tool to make sure it’s slightly compacted.

The array of LED lights on the front of the device is the closest the Atom vaporizer comes to having a display screen. When you first switch the device on, the LEDs light up white, showing it’s ready for vaping. Shortly afterwards, the LEDs will turn purple, which tells you that the atom is warming up the oven. Then when it turns green, you’re ready to vape. There are also three settings you can access, and these are color-coded blue, yellow and red for the minimum, medium and maximum setting, respectively.

The VaporFi Atom also uses the LEDs to give you an idea of the remaining battery life, with green meaning full, yellow meaning part and red meaning low. You can see your remaining battery level by shaking the device (yes, literally shaking it) while it’s switched on.

The VaporFi Atom dry herb vaporizer only has a single circular button on its left edge, and this is used for basically everything you need to do with the device. Turn it on by pressing the button once, and turn it off the same way. Pressing and holding the button for two seconds will allow you to choose the temperature setting. Cycle through the available options by pressing the button, then hold it again when you’re done. This is everything you’ll need to do with the Atom’s button, so it’s really easy.

The VaporFi Atom ticks all the boxes when it comes to design. It has a simple, no-nonsense appearance, some handy design features, a logical structure and an intuitive user interface. There are three temperature settings on the VaporFi Atom:

These can be cycled through and selected as described above – hold the button for two seconds to enter or exit temperature selection mode.

Compared to some other dry herbal vaporizers, the number of settings available here is a bit disappointing – for example, VaporFi’s own Stratus let you choose any temperature within its range. However, the truth is that such fine control is rarely needed. A degree or two in one direction or the other won’t make a difference, and these options cover the main bases. However, most people don’t vape at > 460 °F, because at this point combustion materials are much more common, and that’s probably what you’re trying to avoid.

One of the more interesting features of the Atom herbal vaporizer is its motion sensing technology. This is how you check your remaining battery life on the device (as described above), but it also helps control the 30-second cutoff it features. If you aren’t using or moving your device, it will shut off after half a minute to preserve battery. The good news is that if you’re using the Atom (and don’t set it down between puffs), you won’t have to deal with the device shutting off.

The VaporFi Atom comes with a few different safety features so you can stay safe while you’re vaping. This includes high voltage and short circuit protection, and it has a current limit of 4 A to ensure you don’t run into issues with the battery. These types of concerns aren’t as much of an issue on dry herb vaporizers with in-built batteries (compared to many ordinary vape mods with separate batteries that support user-made coils), but it’s good to have protection anyway.

The VaporFi Atom has the key features you need on a dry herbal vaporizer: the ability to set your temperature and some basic safety features. The motion sensing might be a bit of a gimmick, but it works well alongside the 30 second cut-off and makes it easy to bring up your current battery level.

VaporFi Atom Vaporizer: In Use 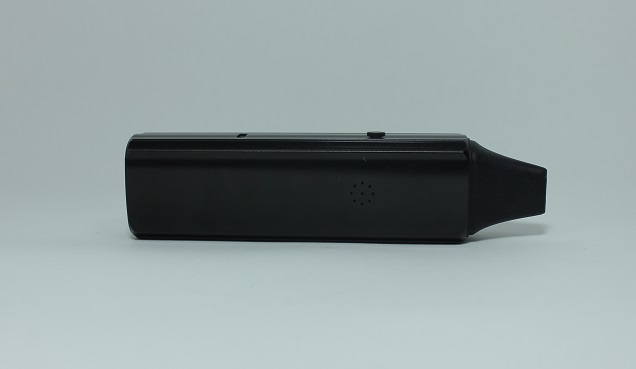 The VaporFi Atom dry herb vape pen performs pretty well, overall. The first thing you’ll notice is that the draw is a little different from many other devices. The fact that the oven is at the bottom of the device means that your vapor is pulled up through the body of the device before reaching you. This gives the VaporFi Atom a slightly tighter draw than some other dry herb vaporizers (like V2 Pro Series vaporizer), but on the whole it’s still pleasant enough to use. Sometimes dry herb vaporizers irritate my nose on higher settings, but the extra space for the vapor to cool on the Atom makes it much more tolerable.

Although vapor production isn’t much of a concern on dry leaf vape pens, there is enough visible vapor so you know you’re vaping. This is especially true on the higher settings. Finally, the flavor from the Atom is always excellent: you taste your herb without any plastic-y overtones or the sort of muted, synthetic taste they sometimes impart.

The biggest thing you can do to adjust your performance on the VaporFi Atom is to change the temperature setting. The blue setting gives a light, head-focused high, and as you increase through the yellow and red settings your body comes into the experience more. The overall effect is great: you’ll get just what you’re looking for, with the yellow setting in particular being enjoyable.

The only downside to the experience is that your herb often doesn’t get evenly toasted. While on most other devices it turns a uniform brown, I’ve consistently noticed small patches of green in supposedly vaped batches of herb. This isn’t a good sign when it comes to the efficiency of vaporization, and means you may be wasting a bit of your material when you vape (though you can save the stuff you’ve already vaped for edibles anyway),

The Atom herbal vaporizer comes with an in-built 3,000 mAh battery, which is a really good offering. This means you can vape for a while before you need to recharge, depending on your settings and how long each session lasts. I try to get everything I can before stopping, so I vape for 10 to 15 minutes or so at a time. I tend to get seven or eight of these sessions in before it needs recharging. The battery goes from being drained to being fully-charged in about two hours; it’s ready when the LED lights turn green.

The VaporFi Atom dry herb vaporizer pen might take a few too many design cues from the Pax, but one thing you can’t take away from it is its suitability for use out of the house. It’s compact and pretty discreet – you could easily mistake it for an ordinary vaping device – and fits comfortably in your hand in use. The mouthpiece is a bit awkward to use, though. It comes out a little too easily when you’re trying to vape and the positioning of the straight one isn’t ideal.

On the whole, though, it’s a great option for discreet vaping. You will be able to smell what you’re vaping, though, so don’t expect complete stealth.

The manufacturing quality on the Atom is pretty solid, just as you’d expect from VaporFi. It’s definitely better put together than the Stratus and Orbit vaporizers, and although it doesn’t have quite the same high-end feel of devices like the Pax, it’s still a well-made, reliable portable vaporizer for dry herbs.

The VaporFi Atom is a great portable dry herb vaporizer. Connoisseurs might prefer finer control over temperature settings and may take issue with the vapor production (especially at lower settings), but overall there’s very little to complain about. For me, the main limitation was the uneven vaporization, but this was only minor most of the time. When it comes to flavor, effects, portability and ease-of-use, it’s really hard to fault. Toss in the price of $139.99 – notably cheaper than the Pax – and you have a very tempting device. Although the V2 Pro Series 7 gives it a run for its money – and vaporizes your herb more evenly – the Atom is now my go-to-device thanks to the great flavor and the smoother vape.