Home › Blog › Vaping Marijuana: What You Need to Know

Vaping Marijuana: What You Need to Know Vaping has brought about a seismic shift in the way people consume nicotine, but vaping isn’t just for tobacco smokers. Cannabis vaporizers have been around since the 90s, but alongside the rise in e-cigarettes, the older tabletop style weed vaporizers have been increasingly usurped by portable and more user-friendly options like the Pax. In short, weed vaping has been here longer than nicotine vaping and its here to stay.

But if you’re a long-time weed smoker and you’re completely new to vaping, or if you’ve switched to vaping nicotine but still smoke joints, what do you need to know to get started? What should you look out for in a cannabis vaporizer, and what types are there? What should you expect? And is it safe? Vaping weed follows the same basic theory behind vaping nicotine. Instead of burning the plant matter, vaping releases the same compounds by heating it to below the point of combustion. The compounds you’re looking for – mainly THC and CBD, but others too – are released at this temperature without all the bad stuff that comes when you combust the cannabis.

Cannabis vaporizers are really more comparable to heat-not-burn tobacco devices, because the actual plant matter is used (in most cases) rather than a THC-containing e-liquid. You load the marijuana into a chamber, and activating the device turns this into a little oven that reaches a pre-specified temperature. You can usually control this temperature to some degree, so you can have some control over what compounds are released when you vape, which in turn impacts the effects you’ll experience.

When you’ve done with your vaping session – most devices have a set length for a “session” but you can re-activate them to vape for longer – your marijuana will turn a hash-like brown color and develop a dry, crumbly texture. This is called “ABV” or “AVB” (already been vaped or already vaped bud), and although you can’t vape it again, it does still contain THC and you can make it into milkshakes (or a lot of different things: r/abv on reddit is a good place to look for more ideas) if you want to re-use it. There are other ways to vape weed, though. As well as the “dry herb” (a pretty transparent but widely-used euphemism) devices, there are also options for vaping concentrates, like waxes or oils. These tend to be more like traditional e-cigarettes, with a coil that heats up when you press a button.

The key benefit of vaping weed is that it’s safer than smoking it. Like with nicotine vaping, you’re essentially reducing your exposure to toxic chemicals and so it’s expected to reduce the risks. However, there are other benefits of vaping your weed instead of smoking it: As you’ve probably noticed, temperature is very important in the world of cannabis vaping. This is because different cannabinoids are released at different times. These are the components of the cannabis plant that have an effect on you. The most well-known is THC, and this is generally considered responsible for the “high” you get from smoking cannabis.

But THC isn’t the only cannabinoid in the mix. CBD is the other important one, and while it doesn’t get you high on its own, it does contribute to the feeling you get when you smoke weed, easing anxiety and having a generally calming effect without being the sole cause of the high. These are the most important two, but there are actually dozens in the plant itself. Most of these don’t have any effects, but THCV may be an exception (although this isn’t completely clear yet).

The key point is that the experience when you vape cannabis is dependent on the temperature, with THC being released at 155 °C / 311 °F and CBD at 165 °C / 329 °F, and the specific mixtures that you’ll find varying more than that. Charts like this one give you a more detailed picture.

Many weed vaporizers aren’t really precise enough at low temperatures to let you just get THC, for instance, but there is evidence that the temperature you vape at impacts the amount of cannabinoids in the vapor substantially, with 200 or 230 °C (390 to 446 °F) being better than 170 °C (340 °F). As long as you’re below the combustion temperature of 233 °C (451 °F) you can experiment, although chemicals like benzene are released more as you get to higher temperatures. Most vaporizers don’t go higher than 220 °C (428 °F). 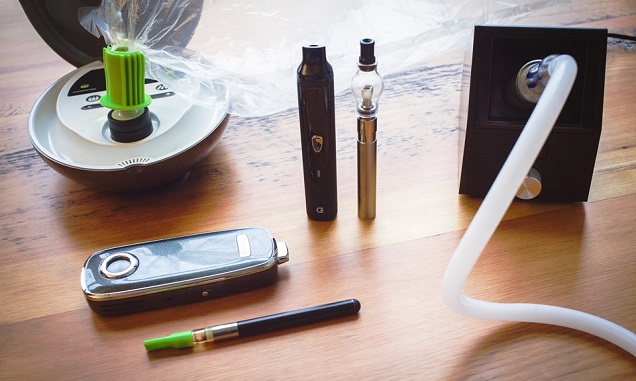 There are three major types of weed vaporizer, along with some multi-function options that blur the boundaries a little bit.

There are two major heating methods used by vaporizers on the market today: conduction and convection. Understanding the difference between these is important if you’re looking to buy a vaporizer, although most of the options on the market (especially the affordable ones) use conduction.

Convection heating is a little different. Rather than heating your material directly, it heats air and then passes this air over your material. This means that your weed isn’t in direct contact with the heating element, as on conduction vaporizers (ignoring the plate it usually sits on), and this means there is no chance of accidental combustion. Convection heating is generally more difficult to achieve, so devices using it tend to be more expensive. However, it heats evenly (so there is no need to move the material around in the chamber to make sure it all vaporizers) and the flavor tends to be better too.

Overall, convection is generally considered the better heating method, but for the sake of saving money, many people go for a conduction vaporizer. They tend to work well anyway, and if you’re not sure you’ll enjoy vaping weed it’s better than spending extra money on something you might not use.

Is Vaping Marijuana Safer Than Smoking It? As with vaping for nicotine, one of the most important issues about vaping marijuana is whether or not it’s safer than smoking it. However – just like with e-liquid vaping – the fact that you avoid combustion and the nasty by-products that come with it means that it’s almost certainly safer to vape. This is a big topic, though (which we tackle in more detail in this post), and research is limited at present.

That said, there is evidence that vaporizing cannabis reduces your risk in comparison to smoking it. One review article looked specifically at the evidence about the potential risks and benefits of vaping cannabis to the lungs. As you’d expect, weed vapor contains less harmful chemicals than smoke, with a pretty much pure cannabis vapor being detected in research with only trace amounts of any harmful components. Other research looked at the carbon monoxide users exhaled after vaping vs. smoking cannabis, and found little or no increase after vaping compared to a substantial increase after smoking.

While a lot of the research into people who use marijuana doesn’t distinguish between the different inhalation methods (e.g. through joints, bongs or vaporizers), some studies do and these offer encouraging evidence on the benefits of vaping. The evidence suggests that people who vape have less risk of lung symptoms than people who smoke marijuana, and this is in line with studies depending on self-reporting of symptoms.

So overall it does appear that vaping cannabis is safer than smoking it, which does carry risks to your lungs. However, the level of benefit depends on how much you smoked (as you’d expect) and also on the quality of the cannabis you use, because some street samples lead to the release of ammonia. That said, you’d be smoking the same marijuana otherwise anyway, so vaping is still beneficial in these cases.

Is Smoking or Vaping Weed Stronger?

As well as the study mentioned earlier, there are several studies that suggest vaping weed is more efficient than smoking it when it comes to getting you high. A study where users were asked about the benefits and downsides of marijuana vaping found consistent reports of more effects from the same amount of cannabis, and other research shows that vaping effectively gets THC into users’ blood.

Finally, a study from late last year recruited 17 participants (who hadn’t had weed in the preceding month) and gave them either 0, 10 or 25 milligrams of THC to either smoke or vaporize in each of six sessions (so one for each dose smoked and vaped). The results confirmed previous results that vaporizing is more efficient than smoking, with an average score for the effects of 25 milligrams found to be 66.4/100 for smoking vs. 77.5/100 for vaping. Alongside these results, the researchers also tested blood levels of THC after vaping vs. smoking the same amount, and again found that vaping is the more efficient method.

In short, vaping weed is more effective than smoking it.

Tips for Getting the Best Performance When Vaping Weed So it’s more efficient and likely substantially safer to vape weed compared to smoking it, but how do you get the best performance? If you’re switching from smoking, there isn’t too much to learn, but a few quick tips will help you get the best vape.

Go Forth and Vape

Vaping weed has taken off for good reason. Like e-liquid vaping, it offers a safer and arguably more enjoyable method of getting what you’re looking for, and there is a wealth of fantastic devices on the market for you to choose between. If you can try it out first and see what you think, go for it, but if you’re looking to enjoy your marijuana with less risk and in a more efficient way, don’t hesitate to hit “Buy” and experience the future of weed.