Urbul’s CBD vape pod device aims to offer a reliable method of getting your CBD in a user-friendly package, but does it deliver? Our Urbul review takes a look at the new pod system. If you’re looking for a user-friendly, beginner-focused device for vaping CBD, the Urbul is a fantastic option and well worth considering. While longer-term vapers might be better off choosing a CBD e-juice to use with their ordinary device, for a pre-filled CBD pod device it’s really good. 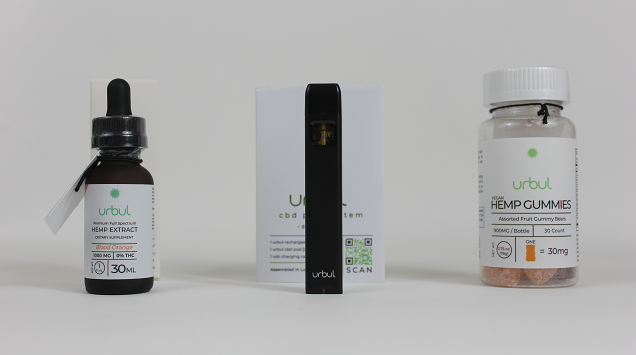 CBD is all the rage at the minute. After high-profile stories alerting people to the potential medical benefits for some health conditions and an explosion in CBD products of different types, it’s no wonder that the world of vaping has gotten involved too. As well as quite a few CBD e-liquids hitting the market, plenty of pod-style offerings have hit the market too, and Urbul is one example of this growing trend. Promising a high-quality CBD vaping experience from a simple, pen-style device, it seems to have a lot going for it, but is the pen really that good? Is it worth the $50 for the starter kit? Are there better ways to vape your CBD? Our Urbul review puts the pod-style CBD vape to the test to find out. The Urbul kit comes in a stylish white box, with a minimalist design and two sections inside. Both of these swing open, with one containing the device and the USB charging cable and the other containing a single 250 mg CBD pod. The kit also comes with a user manual, but this is really small and realistically you won’t need to consult it very often, if at all. Overall, the kit comes with everything you need to get started vaping with the Urbul – a spare pod or two would be nice, but of course this would raise the price, and you can pick some extras up if you want more to get started with anyway. The Urbul pen has a vaguely JUUL-like appearance, with a few key differences. The pen is rectangular in shape, with rounded corners and a uniform black coloring. The “Urbul” logo sits at the bottom, just below the green LED light, and other than that the device is free from any branding or markings. The pod slots in the top of the device, but there’s a square window towards the top so you can see how much is left in your pod, which breaks up the visual look a little bit while still fitting in nicely with the sleek design. Overall, the device isn’t the most exciting looking pod system on the market, but the minimalistic style works really well and it’s hard to imagine anyone having an issue with the aesthetics. The Urbul pods contain the CBD juice and form the mouthpiece when connected to the main device. The pods themselves are quite straightforward, and won’t be a surprise to anybody who’s used a pod-style vaping device before. They match the rectangular shape of the device, with a slightly larger plastic section at the top for the mouthpiece, which tapers in a tiny bit at the top for the mouthpiece section. The pods have two gold-plated contact points at the bottom, and simply push down into the device to connect. When you open the pods, the bottoms are covered with colored caps that reflect the flavor of the pod. The pods have a 1.4 ml capacity, and last for about 300 puffs in total.

The LED indicator on the bottom of the front face of the device does the job you’d expect from any indicator light: it illuminates when you take a puff to activate the device and shuts off when you stop. The light is green, which fits with the branding and is bright enough that it’s easy to see when you’re using the device. It also slowly pulses during charging to let you know everything is working like it should, and flashes when you connect a pod. The Urbul vape pen is charged via USB, and there’s a micro-USB port on the bottom to use with the included charging cable. The positioning of the port means it doesn’t interfere with the look of the device, and you simply lay it on its side to charge. There isn’t much else to say here, really – it does the job well and doesn’t get in the way of anything else.

The Urbul vape pen is simple when it comes to design but achieves everything you need it to and is really easy to get to grips with for anybody new to vaping. Overall, it does a great job in terms of design. Vapor production isn’t really as important a factor for CBD vape pens as it is for traditional nicotine vaping, but it’s still a good measure of how the pen performs. The Urbul definitely doesn’t put out huge, nicotine vaping-like clouds, but you get a small puff of vapor, similar to what you’d expect from a simple pod device using salt e-liquid. In terms of getting the CBD you’re looking for, this isn’t an important issue, but the Urbul puts out enough vapor to satisfy anybody used to regular e-liquid vaping. The clouds are a little wispy and thin, but they’re more than fit for purpose. You definitely get and efficient dose of CBD from a couple of minutes of puffing.

Being an “automatic” (i.e. puff to vape) device, how well the Urbul responds to your puffs is an important issue. The good news is that it responds pretty much perfectly, activating and starting to produce vapor as soon as you inhale from the end. In the whole testing period I haven’t had issues with the device being unresponsive, so you can depend on it to get the job done every time. This is sort of expected, but it’s an important factor because it’s really frustrating when some devices take a few puffs to really switch on.

One of the big selling-points for Urbul is their six pod flavor options: Blackcurrant, Mango, Melonberry, Menthol, Unflavored and Strawberry. My kit came with the Blackcurrant option, which is described as a blend of blackcurrant and grapes, with a tart flavor profile. The blackcurrant comes through pretty well, with a definite tartness at the beginning of your draw, although admittedly it’s drowned out a bit as you continue and start to pick up some vaguely marijuana-like notes from the CBD itself. The flavor definitely makes the juice more enjoyable, but honestly I think it could have been dialed up a little – if you’re choosing the flavored pod over the unflavored one, you want a strong flavor.

The Urbul has a 300 mAh battery, which might not sound huge if you’re used to e-liquid vaping devices, but really it’s a solid offering when you consider how little CBD you’ll need to vape each day. In terms of pods, the battery lasted me through about 2/3 of the pod (so just over 160 mg), which was easily a few days’ worth of CBD vaping at my levels. If you need more CBD than this, you’ll get through a charge more quickly, but at any realistic level it will last you at least a day.

Recharging is a pretty quick process with the included cable, only taking about 40 minutes to go from completely empty to completely full  in the testing for this Urbul review – which is really impressively quick. It supports vaping while charging too, and as long as you don’t vape too much it won’t affect the charging time noticeably (although it will slow it down, of course). The Urbul couldn’t really be any easier to use. All you have to do to start vaping is take the base cover off the pod, push it into place in the space at the top of the device, then take a puff from the mouthpiece to vape, just like you were smoking a cigarette. The LED light will flash when you insert the pod to let you know it’s connected properly, and it works straight away. Nothing needs to screw into place, and thanks to the pre-filled pods there’s no need to refill either. Even if this is the first time you’ve ever vaped or even held a vape pen, you’d be able to use it without even needing to check the instructions.

Overall, it does a great job when it comes to ease of use.

The Urbul is super-comfortable to use. The reason for this is quite simple: it’s so small that it fits comfortably in your hand, and even with the rectangular shape it still doesn’t feel uncomfortable to use in the slightest. You can hold it loosely in your palm or between your fingers as you vape, and it’s so light you can easily hold it between your lips without even needing to use your hands.

And the portability fits right in with this. The device is really small so it can easily slip into a pocket without difficulty – it’s about the size of a JUUL, for comparison. So it’s perfect for taking out and about with you, and it’s discreet enough that you won’t attract much attention when you’re vaping with it, either for the device or the vapor cloud.

Leaking is an issue with many standard vaping devices, but there’s nothing to worry about on this front with the Urbul. Thankfully, the Urbul doesn’t have this issue, thanks to both the enclosed pod-style design and the fairly thick CBD liquid. So you can pretty much rest assured that you won’t have issues with leaking when vaping with the Urbul. Urbul doesn’t just offer vape pens, though, and the package sent to me for review also included oral CBD drops and some gummies. The drops were blood orange flavor and actually pretty nice in terms of flavor – they still had a hint of the taste of CBD but overall the orange really won out. The (vegan-friendly) gummies were also hard to fault, they were sweet enough to enjoy but contained enough CBD (30 mg per gummy) that a bottle will last you a long time. They’re not likely to be the biggest draw for you if you’re interested in vaping, but they were still both good.

The Urbul pen is well put together and everything works as it should. The connection between the pod and the main device is a little tight, and the edge of the pod does get caught on the window sometimes, but overall it’s really well put together and you’re unlikely to run into any issues.

The Urbul pod vape works just like you’d want it too, is easy to use and not a bad price for a CBD vaping device. It might not be a big hitter in terms of vapor and the flavor could be improved a little, but if you’re looking for something simple to let you dose CBD out of the house, it works really well. It’s especially great if you’re a new vaper, because it’s about as easy to use as a CBD can be, but if you’re experienced or already have a vaping device you can fill with CBD liquid, it might not be worth the investment.