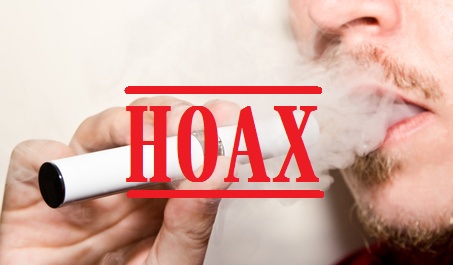 When you’re first learning about e-cigarettes, the fine vapor of their health benefits often gets blocked from view by the thick, pungent smoke of misleading claims, scaremongering headlines and downright fallacies. Wading through the smog and coming out with any reliable, definitive facts about e-cigarettes is unfortunately difficult, but the information is out there. To help you understand the harm reduction value of e-cigarettes, this article addresses the common and all-too-familiar myths regarding electronic cigarettes.

The story of a Florida man whose e-cigarette exploded in his mouth has plagued e-cigarettes ever since. The truth is that this e-cigarette exploded because it was a “mod” e-cigarette, or in other words: one he’d built himself. Manufacturers build their reputation on the quality of their products, and institute rigorous safety checks and third-party testing to prevent this from happening. Plus, cell phones explode with unfortunate regularity, and all batteries inherently carry a small risk.

An FDA study which looked at eighteen different e-cigarettes found a trace amount of diethylene glycol in one of them. This was seized upon by the news media since it’s an ingredient in anti-freeze. What they didn't mention is that the same chemical is used in ten times the quantity in aspirin, and independent reviews have found no traces of the chemical in other e-cigs.

The same FDA study also found tobacco-specific nitrosamines in the e-cigarettes, which are known to cause cancer. This was also reported readily, but a few salient facts were left out. It’s a question of quantities, and Michael Siegel’s analysis demonstrates clearly that there are up to 1,400 times more nitrosamines in cigarettes, and that they’re also present in any nicotine products, such as FDA-approved gum and patches.

Nicotine has a negative reputation because it hangs out with a bad crowd when it’s in tobacco. The 5,000 plus chemicals in tobacco smoke include plenty of carcinogens, but nicotine itself is not one of them. The Royal College of Physicians in London referred to nicotine as a “very safe drug” in a piece of research on harm reduction measures for smoking. Also, the effects of pure inhaled nicotine have been studied in rats and they didn’t get more tumors than the control (no nicotine) group.

SEE ALSO: Top 10 Studies on Nicotine You Need to Know About!

6: Nobody Knows What’s in Electronic Cigarettes!

Scare-stories of rogue online traders and deviant manufacturers have banded around the idea that nobody knows what’s inside e-cigarettes. This is far from true, as there have been numerous studies into the contents of e-cigarettes. They only contain nicotine, propylene glycol (which is very safe and used in everyday products) and FDA-approved food flavorings.

A recent piece of research has claimed that e-cigarettes increase airway resistance after ten minutes of use. This was broadly translated into “e-cigarettes harm the lungs,” and the media snapped it up. Michael Siegel explains that breathing hot, humid air has the same effect, and points out that the residents of Tampa aren't all suffering from lower levels of blood-oxygen as a result. Transient increased resistance does not equal lasting lung damage.

SEE ALSO: E-Cigs Not Found to Cause Lung Damage

The notion of “second hand” damage from “vaping” (inhaling vapor from an electronic cigarette) is absurd because of the things already learnt. Nicotine isn't dangerous, and e-cigarettes contain little else of note. The levels of nitrosamines in e-cigarettes are of insignificant risk for the users themselves, so the second-hand danger is exponentially lower than that.

SEE ALSO: Electronic Cigarettes Do Not Cause Second-hand Smoking

This is where things start to get ridiculous. It’s claimed that the fruity flavor selections and the “attractive packaging” will tempt children to use e-cigarettes. The flaws with this are numerous and damning. For one, e-cigarettes are subject to age restrictions, so they’re as challenging (if not more so) to get hold of as tobacco cigarettes. Yes, there are internet suppliers, but starter kits regularly cost in excess of $100 and require a credit or debit card to purchase. If a child got hold of an e-cigarette that way, their main concern would be their parents’ reaction to their credit card being stolen!

SEE ALSO: Electronic Cigarettes are not Gateways to Cigarette Smoking

1: E-Cigs are Just as Bad as Tobacco