Tips for Successfully Switching from Cigarettes to E-Cigarettes As January rolls on, the New Year’s resolutions are starting to feel the strain. Whether you’re still attempting to replace your deadly combusted tobacco habit with e-cigarettes, have tried to quit smoking using traditional methods and aren’t having much luck, or just happen to have decided to make the switch recently, getting some tips for successfully switching from smoking to vaping can help you stay on the wagon and wave goodbye to cigarettes for good.

1: Stock Up – You Save Money in the Long Run

E-cigarettes do save you money. We’ve all heard it, and it may have been a factor in your decision to make the switch. The only problem is that when you’re first getting started, this is far from the truth. It’s bound to be more expensive to pick up a device or two, plenty of e-liquid and a few clearomizers or atomizers than to buy a pack of 20 smokes and a lighter. But the savings come in the long-term; once you’ve got a starter kit, all you really need to do is keep yourself stocked up on liquid, and that is much, much cheaper than buying smokes.

So with that in mind, don’t worry about spending more when you’re first making the switch. It’s better to get yourself a couple of reliable batteries (so you can keep vaping while one is charging), make sure you have a couple of clearomizers or atomizers along with some spare coils and start amassing e-liquid like there’s no tomorrow. Of course, it’s better not to plunge money into a habit if you don’t enjoy it, but if you’ve tried vaping and you like it, this is the best approach.

2: Get a Variety of Flavors 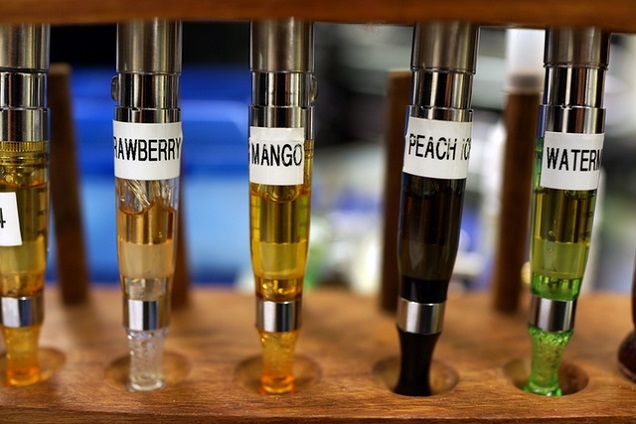 As a smoker, you get used to the flavor of combusted tobacco, and you’re likely to want an e-liquid that replicates it quite well. This is absolutely fine – anything that helps you make the switch is a good thing – but keep in mind that there is a lot of variety in flavor available, and this is one of the big benefits of e-cigs. Research shows that most vapers start on tobacco flavors and then progress to sweet or fruity flavors. It’s been suggested that moving away from tobacco flavors helps to establish vaping as a new habit that’s fundamentally different from smoking, and the more you vape delicious flavors the more tobacco starts to taste like ass.

Use tobacco-flavored e-liquids for as long as you like, but it’s worth anticipating the transition to non-tobacco options. Try an RY4 (tobacco-ish with a caramel-sweetness) as a “bridge” to non-tobacco flavors, and pick up some e-liquids in a broad range of flavors that sound appealing to you. The same study showed that successful switchers are more likely to change flavors at least once a day, and while this doesn’t mean it’s necessary for you personally, it’s definitely advice worth keeping in mind.

3: High Nicotine Levels are Your Friend

There’s a general concern that e-cigarettes are just a way to continue your nicotine addiction, and really, it’s basically accurate but not something to be concerned about. E-cigarettes are less addictive than cigarettes, for one, but most importantly, if you’re a smoker, you’re already addicted to nicotine. If anything, the fact that e-cigs are less addictive than cigarettes is a bad thing – to really reduce harm, you need to move your addiction onto e-cigs entirely. With that in mind, don’t be shy with your nicotine level selection. If you’re a smoker of around 20 per day, 18 mg/ml is probably suitable, but since e-cigs don’t deliver nicotine as effectively as cigarettes, if you’re a heavier smoker (or struggle to quit with 18 mg/ml), go for 24 mg/ml e-liquids and then reduce your nicotine level when you’re ready.

4: Don’t be Afraid to Chain-Vape Closely related to the point above, you might be a little concerned about how addicted you are if you’re chain-vaping to get enough nicotine, but really it’s better to chain-vape at first to get the nicotine you need than to revert back to smoking. Research shows that you need to vape longer to get the same amount of nicotine in your system as from a cigarette (even with powerful devices, it takes about half an hour to achieve this), so it’s to be expected. Especially during the early stages of your switch, chain-vaping is advised if you feel like you need to. Focus on quitting cigarettes for now; there’s plenty of time to reduce addiction later. The desire to switch to something as much like smoking as possible may lead you to try rechargeable or disposable “cigarette-like” (cig-a-like) e-cigs. These can be effective too, but if you’re serious about making the switch these days, an eGo-style model (more the size of a cigar, with a button to activate the atomizer) offers better battery life and improved performance. The less you need to recharge, the better.

If you’re really looking for the ultimate experience, variable voltage or wattage (VV/VW) mods (bigger devices that allow you to control the power going to your atomizer) take this one step further, and still maintain simplicity of operation. There’s no need to rush onto more advanced-level devices, but starting with an eGo is a good idea, and if you’re comfortable with something a bit more complicated, then picking up an affordable mod like the iTaste MVP is even better. Getting yourself a more capable device gives you a better chance of enjoying vaping, but don’t get ahead of yourself, especially if you want as simple an experience as possible. Bigger batteries like eGos or straightforward mods aren’t complicated or hard to use, but if you don’t feel like moving onto something like this yet: don’t! We advise choosing a capable battery, but if the added buttons and features seem too complicated, stick with something simple.

Rebuildable atomizers (which allow advanced users to build their own coils) are the best example of what we’re getting at here: while the vapor production, flavor and performance are better, you can still have a very enjoyable vape with a clearomizer, so there’s no need to progress to rebuildables if you don’t want to or if it seems too hands-on. You might get well-intentioned advice to move to more advanced options, but take it at your own pace – simpler is better to start out with.

7: Don’t Worry About Abstinence – Cutting Down on Smoking is Good Too Most people who start vaping aim to completely stop smoking, but stopping smoking – even with a great quitting aid like e-cigs – is downright hard. If you still smoke some cigarettes each day, don’t beat yourself up about it! Chances are, you’ve cut down on how much you smoke, and that’s a great thing! Every cigarette you don’t smoke is a butt-load of carcinogens you don’t inhale, so each one is a little victory. You’ll probably smoke less and less as you keep vaping, but even if you can’t kick those last few cigarettes each day, you’ve done yourself a huge favor by cutting down.

8: Use the Vaping Community Vapers are a helpful bunch. Forums like the E-Cigarette Forum, the electronic_cigarette subreddit and many more bastions of the vaping community are full of people who’ve been where you are and are happy to offer support, guidance, advice and tips to help you out – join up to some vaping communities and don’t be afraid to ask for help!

9: Inoculate Yourself Against BS

Sadly, there are many people (who get a disproportionate amount of media attention) who hate e-cigs. Vaping looks like smoking, and a lot of people lose their minds over it for that reason. Results of studies are misinterpreted and reported with alarming headlines, well-qualified people make thoroughly misleading or outright incorrect statements, and there are myths that just won’t die. If you find yourself worrying about a particular headline or comment – saying vaping is no safer than smoking, for instance – don’t take it at face value. There are many researchers who explain the science in simple terms (Dr. Michael Siegel’s blog is a great source for this), and plenty of websites giving a run-down of the latest research.

Simply do a little bit of research and you’ll almost always find concerns to be vastly overblown. If there was just one piece of advice to inoculate yourself against anti-vaping BS, it would be this: if you read a news story about a new study that concerns you, find the research it’s based on and read the abstract. 90 percent of the time e-cig studies are easy enough to read as a non-specialist, and it will give you a straightforward, (ordinarily) bias-free explanation of what the research actually found, and crucially, what they did to find it.

So, if your resolution was waning or you’ve just decided to make the switch, these tips should give you some pointers to continue vaping and eventually ditch the combusted tobacco. And remember, the longer you vape, the less you’ll think about smoking and the easier it will become to stay smoke-free. Every day you continue vaping, you’re winning the battle.