It's time to step your vape game up. If you can get past the Tesla's odd futuristic sex toy appearance, then this just might the device to ditch your eGo for. The Tesla packs up to 15 watts of power to allow for some serious cloud production on a budget.

My vaping career had a pretty rocky start. In March of 2012 I bought a cheap rechargeable e-cig from my local 7-Eleven excited but skeptical it would help me quit smoking. To my disappointment, I used it for about 5 minutes before lighting up yet another analog.

The following month, completely aware there was a world of vaping beyond mini “cig-a-likes”, I saw a guy vaping on an eGo-T and was instantly intrigued and bought a kit from him and some 18mg generic peach flavored juice from the smoke shop next door.

The eGo-T did, however, have a pretty decent battery and some months later I discovered a brick and mortar shop dedicated solely to vaping and picked up a DCT tank and pack of cartomizers. Alas, I was able to cut down on cigarettes, however didn't fully quit. That was until this past March when I picked up my first mod, which happened to be the Tesla. 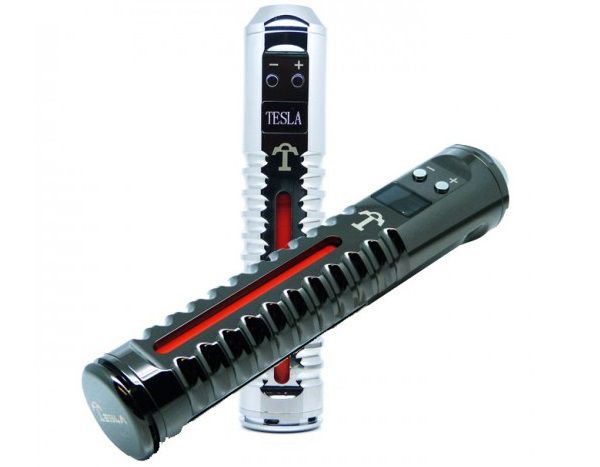 I convinced myself that if I was spending $130 after tax on a mod, battery, charger, UDCT, drip tip and pack of cartos that I had to stick to vaping. Sure enough, I haven't had a cigarette since! While I have since moved onto mechanical mods and rebuildable atomizers, I still have the Tesla and use it mainly for checking the resistance of my atomizer builds. If you can get past its explicit appearance, it is a fantastic VV/VW (Variable Voltage/Variable Wottage) mod.

The Tesla mod is packaged in white Sigelei-style hard-shell box. Inside the mod is nestled in a white foam crib along with a small instruction manual. Packaging is pretty standard for an intermediate level mod. Is it a light saber or a futuristic sex toy? That has to be the first impression of nearly everyone unfamiliar with what the Tesla actually is. And for what it is, the Tesla is a pretty gorgeous device! It's a beast in both size and build quality, at around 5.5 inches in length.

The version I purchased from Vapor Bombz in Anaheim, CA back in March was the black chrome aluminum alloy. From what I've seen, it's also available in regular chrome and a solid black aluminum as well as brushed stainless steel.

The most distinct feature of the Tesla is its ribbing (for gripping purposes) running around the lower 2/3 of the tube. Not to be forgotten are three cutouts running lengthwise down the mod for aesthetic purposes as well as additional venting. There's also Tesla branding on the bottom cap and right below the LED screen.

There is no denying the Tesla's sturdiness. Its build quality is possibly as good as it gets for a variable voltage mod as I have dropped it on more than a few occasions and it still looks good as new.

The aluminum walls are quite thick, too, shielding the battery from pebbles in the case of being dropped and preventing the tube from dents. They are also coated with a strong finish that helps prevent normal wear other chrome aluminum mods may incur.

Thanks to a sturdy spring in the bottom cap, there is no battery rattle either. The only rattle you'll hear is that of the firing and two settings buttons as they sit a bit loose in their housing.

Given the nature of the Tesla, it's only natural to require some fidgeting to become acclimated with all of its features. The 510 connector sits just above the lip of the tube allowing for ventilation when using DCT and clearomizer tanks. The center pin also sits on a spring to accommodate different lengths of 510 atomizer connectors.

Five clicks of the side mounted firing button will turn the mod on and off. And of course, once on, holding it down will fire up whatever atomizer you have hooked up, so long as its resistance is above 1.2 ohms.

Holding down the “+” button for 3 seconds will read the resistance of your atomizer while holding down the “-” will give you the remaining voltage on your battery. Holding down both buttons will lock the Tesla to prevent accidental firing if you don't want to just power the mod off.

You can also hold the “+” button for about six seconds to bring up the control menu, which allows switching from power mode to voltage mode and customization of LCD preferences. Holding down the “-” button for six seconds won't do anything beyond read the battery's remaining power.

There's not much to say in regards to the Tesla's performance. It does what it's supposed to do. Its internal computer is accurate to about +/- 0.2 volts. Voltage or wattage can be adjusted accordingly to user preference to fit the resistance of the attached atomizer.

With a standard IMR 18650 2000mAh battery, I can vape all day long without requiring a recharge or a fresh battery. The eGo-VV battery I had prior to the Tesla had started to wear down and would only last me around 8 hours at best.

I would recommend going with a low-resistance cartomizer in a chrome or black chrome UDCT tank, depending on which Tesla model you have, and setting the power around 8 watts to maximize vapor production and battery life. Not only will you get a good vape but UDCT tanks match up perfectly with the base of the top of the mod.

You can compare the Tesla mod with some of the other top vape mods on the market. If you're looking for a mod below the $50 price range, check out the best vape mods under $50 here.

Though not as pricey as most high-end mechanical mods, the Tesla will set you back around $80 for the tube alone. However, if you still haven't found the right device to help you completely move on from smoking cigarettes, it may just be the perfect choice, as it was for me. I've had mine for 5 months now and it still looks and performs as well as the day I bought it! The Tesla is definitely still one of the best variable voltage mods available.