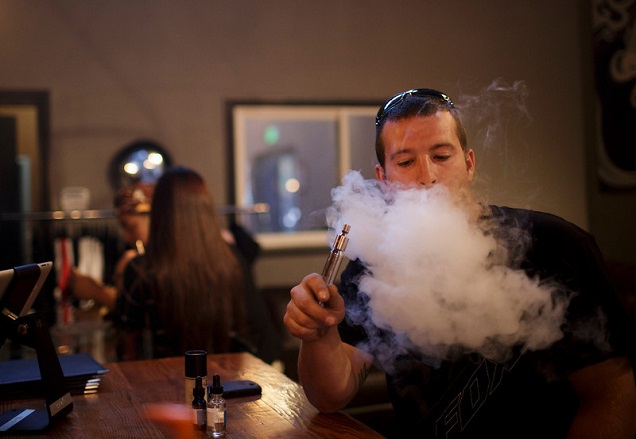 E-cigarettes don’t work for everybody. Some quit smoking entirely after starting to vape, some just continue smoking, and some do both, becoming “dual users.” Understanding the difference in characteristics between those who become a former smoker thanks to vaping and those who merely transition to dual use is an important priority for researchers.

A new survey (available in full for free) published in the International Journal of Environmental Research and Public Health from Dr. Konstantinos Farsalinos and his colleagues examines this issue, looking at information provided by over 19,000 vapers and dual users. The questionnaire looked at the characteristics, patterns of use and the side effects and benefits of vaping as perceived by the users. The sample was largely composed of “dedicated” vapers, forum users and those active within the online community, and although the findings probably don’t apply to the general population, it offers plenty of insight into what appears to make a “successful” vaper.

One of the main goals of the survey was to get information from vapers from all over the world, because previous research wasn’t particularly multi-lingual. The new survey was available in 10 languages, and was conducted using SurveyMonkey. Questions covered many different areas, establishing the general characteristics of vapers, their smoking and vaping histories, determining their level of addiction to nicotine, and finding out about any pre-existing conditions and how users’ health appears to have been affected by switching to vaping.

What They Found – Vapers’ Characteristics and Usage Habits

Most of the respondents (around three-quarters) were European, with Americans making up the bulk of the remainder, aside from small proportions of Asians, Australians and Africans. The most notable thing about the people who responded to the survey is that 81 percent had quit smoking altogether. This is a reminder of the effect of the sample selection process (with around 73 percent finding out about the survey through e-cig forums), and obviously doesn’t mean that using e-cigarettes gives you an 81 percent chance of quitting smoking.

The type of vapers who responded is pretty-well summed up by the fact that over half of the sample used ecig mods (with just 3.7 percent using first-generation, cig-a-like devices) and 38 percent mixed their own e-liquids (both of these were more common in former smokers); these are dedicated vapers, and that’s why such a large number of them have quit smoking. However, out of the dual users, almost a third didn’t even smoke every day, and the remainder of the sample went from an average of a pack a day to just four cigarettes per day. Even if they don’t completely quit, this is an 80 percent reduction in the number of cigarettes smoked per day. 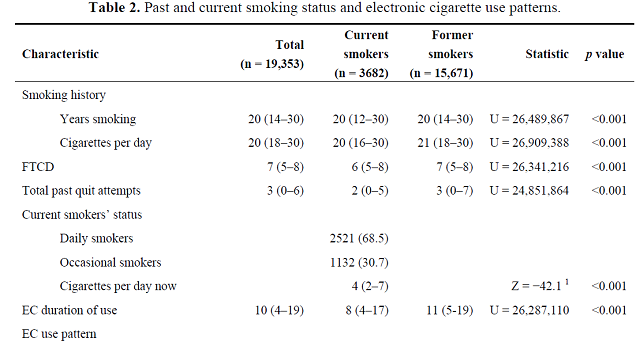 Interestingly, the former smokers who responded (those who were only vaping) actually scored higher on tests of cigarette dependence, and had tried to quit more often previously than the “dual users.” The researchers suggest this adds further evidence that e-cigarettes may be particularly helpful for heavy or particularly addicted smokers – those who’ve tried to quit using other methods and failed, for example. However, the fact that participants had to retrospectively “remember” their level of addiction may have led to some overestimation of how severe it was.

The nicotine levels used shows that most vapers start at 18 mg/ml and eventually move down to 12 mg/ml, with only 3.5 percent of participants using nicotine-free liquids. The sample was mainly European, so it’s interesting to note that 21.5 percent of them started by using liquids with a nicotine concentration over 20 mg/ml, the limit set to be imposed on e-liquids by the EU. Additionally, 23.3 percent of the former smokers (i.e. the successful quitters) used stronger e-liquids, compared to just 13.8 percent of the current smokers. This not only suggests that the EU’s course of action is counter-productive, but also that in general, higher nicotine levels help people quit.

The most popular reason for starting to vape was to reduce or quit smoking because it’s an unhealthy habit, followed by reducing the smoke exposure for family members, economic reasons and the variability of flavors available. The least popular reason was to avoid smoking bans in public places – a reminder that vapers aren’t just looking to enjoy nicotine when they otherwise couldn’t, they’re doing it to benefit their health.

The vast majority of respondents – 88.2 percent – said that they thought e-cigarettes were less harmful than tobacco cigarettes, and only 0.5 percent thought they were equally harmful. On the extreme ends of the opinions, 0.1 percent of respondents thought that e-cigs were more harmful than tobacco cigarettes, but more worryingly, 11 percent thought that e-cigs were absolutely harmless (more common in former smokers). Of course, they are much, much safer than smoking, but the presence of small amounts of toxic chemicals and the unknown effects of inhaling many food-safe flavorings used in e-liquids means that absolute safety is highly unlikely.

Additionally, in line with other findings (such as the oft-quoted CDC survey), the researchers found that only 0.5 percent (just 88 out of 19,441 participants) were non-smokers who vaped. Many public health experts are worried that e-cigs will actually increase nicotine dependence in the population by enticing non-smokers into vaping. This finding suggests this is quite a rare phenomenon, and 20.5 percent of this group were also presumed to be ex-smokers (because they reported past quit attempts or completed cigarette dependence questions). Interestingly, of the non-smoking vapers, 33 percent answered that they thought e-cigs was absolutely safe, suggesting that this mistaken belief makes experimentation from non-smokers more likely. However, just over half of them used non-nicotine liquids, so developing addiction is not an issue for most.

Side Effects and Health Issues

Around 58 percent of respondents attributed at least one side effect or symptom to their vaping. The most common symptoms were a dry or sore mouth or throat (around 39 percent reporting this), with coughs and gum problems being the next most common symptoms (although current smokers were more likely to report a cough). Headaches were reported by 11.1 percent of respondents, but the remainder of the side effects were much less common. In over 90 percent of cases, the issue completely or partially cleared up, with the likelihood of this corresponding to the length of time the individual had been vaping. Like in other studies, the side effects associated with vaping appear to be largely minor and also fairly transient.

Much concern recently has revolved around the possibility of accidental e-liquid exposure or electrical problems, but the survey found that only 1.5 percent of users had suffered e-liquid exposure. This was the most common accident, and the small number of vapers reporting it is particularly important because the participants included an unusually high number of DIY mixers, who understandably handle e-liquid more than most vapers would.

Most vapers reported an improvement in their general physical status, their senses of smell and taste, their breathing and their endurance. Factors showing no improvement in most vapers included appetite, mood, sexual performance and sleep, but across the board only small numbers of users experienced things getting worse. The biggest negative effect of vaping was on quality of sleep, where 3.4 percent reported it getting worse after starting vaping.

Over 5,200 of the participants had a chronic health condition, and they were asked additional questions to determine the effect – if any – that vaping had on their condition. Generally speaking, improvements in conditions were reported most commonly in former smokers, suggesting that quitting smoking altogether is responsible for the benefits, not vaping in and of itself. In most of the health conditions covered, switching to vaping didn’t have an effect, but it rarely got worse, with over 97 percent reporting their issues either remaining stable or improving after starting vaping for any of the included conditions. The most common improvement was reported from those suffering from chronic obstructive pulmonary disease (COPD) (75.7 percent reporting an improvement), followed by asthma (65.4 percent improved) and coronary artery disease (53.8 percent). Additionally, over a third of asthma and COPD patients’ doctors reduced or stopped their medication entirely after they started vaping.

The biggest drawback of this study is the fact that most users were particularly dedicated, and are unlikely to represent the general population or even most e-cigarette users. This is simply because you’re unlikely to be on a vaping forum if you tried e-cigs once and they didn’t work for you. Aside from this, the relative lack of participation from Asia is an issue, and the researchers suggest targeting the continent in future to see how the comparatively lax anti-smoking rules in places like China affect e-cig use.

The self-reported nature of the health improvements obviously means that this isn’t definitive proof of health benefits of e-cigarettes. Quitting smoking is well-known to improve health, but objective analyses of vapers would need to be conducted to confirm that such effects were also obtained by switching. The study does offer some evidence (especially for things like improvements in smell and taste, which are more subjective in nature) of health improvements, though, and further research is likely to obtain similar findings. Additionally, the fact that many doctors adjusted prescriptions for COPD and asthma after the individual switched to vaping suggests these effects are real, physical changes, as opposed to just optimistic reporting from dedicated vapers.

The survey results suggest that most vapers are smokers or ex-smokers, and that most “dual users” reduce their cigarette consumption notably. Most vapers consume nicotine (unless they were one of the very rare non-smoking vapers), and more appear to quit if they start on over 20 mg/ml of nicotine (a concentration soon to be outlawed in Europe). Accidents – despite what news reports would have you believe – appear to be very rare, and in many cases, vapers feel as though their physical health has improved. The sample is probably unrepresentative, though, so all of these findings need to be taken with a pinch of salt. However, it appears that e-cigarettes do help some people quit, particularly the more dedicated, mod-toting vapers.