Stanton’s Spin: Does a New Study Show That Vapers Might as Well Smoke? Few people are responsible for as much misinformation about vaping as Stanton Glantz. Ever since the cigarette papers arrived at his office, he has been a huge name in the fight against smoking, and a name that’s pretty hard to avoid if you spend long enough reading about vaping.

The problem is that he’s a seemingly never-ending fountain of nonsense.

From claims that vaping actually makes quitting harder to the way he laughably assumes causation from correlation when interpreting – or conducting – studies claiming to show a gateway to smoking, you can pretty much rest assured that he’ll promote anything that can be used to demonize vaping.

But unfortunately, he doesn’t limit these proclamations to the times they could actually be justified. After the release of a study last month looking at exposure to toxicants and nicotine for vapers, dual users and smokers, Stanton made the risible declaration that “[most vapers] would be better off just smoking.”

This claim should raise a skeptical eyebrow from most readers. After all, Public Health England, the Royal College of Physicians, the National Academies of Sciences, Engineering and Medicine and pretty much anyone else who’s looked at the evidence has concluded that vaping is much safer than smoking.

So what’s going on? What does the paper really show and is Stanton Glantz right?

The Study: Comparing Toxicant Exposure for Vapers and Smokers

The study that this is all based on is a fairly straightforward piece of research. The authors used data from around 5,100 participants from the 2013-2014 Population Assessment of Tobacco and Health (PATH) Study. They analyzed the biomarkers for exposure to different chemicals – including nicotine, tobacco-specific nitrosamines, metals, polycyclic aromatic hydrocarbons (PAHs) and volatile organic compounds (VOCs) – using urine samples provided by the participants. The authors split the participants into different groups based on their smoking status, so the results from people who only vaped were compared to people who only smoked, those who both vaped and smoked, and people who neither vaped nor smoked. All of the different groups were compared in this way, and the authors also compared the participants based on how much they vaped or smoked (e.g. every day or some days).

The reason for this is simple: if people who vape are exposed to smaller amounts of potentially dangerous chemicals than people who smoke, it can be inferred that it’s probably safer to vape. For example, tobacco-specific nitrosamines cause cancer, but the small amounts present in things like nicotine patches and gums aren’t known to be a risk factor for cancer, while the larger amounts in cigarettes are.

Stanton’s take on the study is summed up by the headline from his blog post:

Using e-cigs increases exposure to toxic chemicals for most users; they would be better off just smoking.

As far as we can give Stanton credit, he edited his blog post after a comment from a reader, and in the body of the post he now states:

[F]or most people using e-cigarettes (the dual users) unless they switch completely they would be better off if they just smoked the cigarettes.

His rationale for this comment is that the results for many of the chemicals covered suggest that dual users (who both vape and smoke) are exposed to higher levels of these chemicals than people who just smoked, and he points out that 76 percent of the vapers in the sample were dual users.

Underneath his short blog post, he includes the abstract of the study, including its conclusion that:

Exclusive use of e-cigarettes appears to result in measurable exposure to known tobacco-related toxicants, generally at lower levels than cigarette smoking. Toxicant exposure is greatest among dual users, and frequency of combustible cigarette use is positively correlated with tobacco toxicant concentration. These findings provide evidence that using combusted tobacco cigarettes alone or in combination with e-cigarettes is associated with higher concentrations of potentially harmful tobacco constituents in comparison with using e-cigarettes alone.

What The Study Actually Shows: Vaping is Safer than Smoking

As the conclusion should have made clear – to Stanton himself as well as any reader – the study is more positive about vaping than Stanton is implying.

The headline finding for vaping vs. smoking is the same as we’ve heard time and time again: vapers generally have much lower levels of harmful chemicals in their body compared to smokers. While the results show similar levels of metals between the groups, fully-switched vapers had lower levels of all tobacco-specific nitrosamines (for example, for NNN the levels in smokers averaged 11.8 picograms per mg of creatinine, compared to 3.5 in vapers and 1.9 in people who did neither), all of the PAHs covered and 17 of the VOCs covered (for example, the study points out that there is a 60 percent decrease in the biomarker for acrolein in the vapers, compared to the smokers).

This graph from the study really drives the point home: 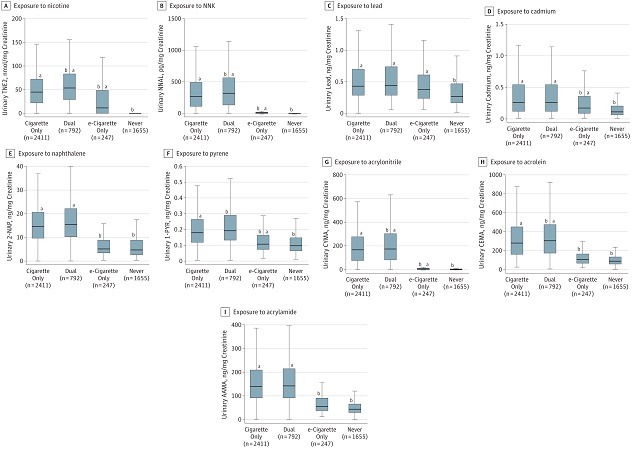 This is why the authors of the study went with this very reasonable description to lead into their discussion of the results:

Findings suggest exclusive e-cigarette use results in measurable exposure to tobacco-related constituents; however, compared with cigarette smoking, biomarker concentrations of nicotine and toxicants among e-cigarette–only users were much lower.

As the authors also point out, the data was taken from 2013 to 2014, so many of the vapers were probably using earlier-generation devices, and modern devices are known to deliver more nicotine. There may be differences in quantities of other chemicals too, but more analyses – which avoid the issue of dry puffs – will be needed to make strong statements on this.

Stanton’s proclamations rest solely on the results for dual users. The authors report that dual users had higher levels of most biomarkers than smokers, including three of the tobacco-specific nitrosamines, 5 PAHs and 13 VOCs. It’s worth noting, though, that the dual users in the study smoked the same number of cigarettes per day as the participants who only smoked. This is unusual – even Stanton was surprised by it – but it’s important to note that the study doesn’t tell us how much the dual users smoked before they started vaping. Other studies strongly suggest that dual users tend to reduce the amount they smoke. Additionally, only 20 percent of the dual users in this study vaped every day. The whole study – but this last part of the analysis in particular – shows the true take-away point from this research: it is the smoking that has a substantial effect on the results. The some-days smokers generally had lower levels of the harmful chemicals than the everyday smokers, as you would expect. The more the participants smoked, the higher their levels were. The idea that vaping is a cause for concern is in no way suggested by this study. It’s likely true that the dual users would have been smoking more if vaping hadn’t been available, and this would have enabled the researchers to put the dual use results into context.

Most Vapers Are Dual Users, So Isn’t Glantz Kind of Right? There is a potential kernel of truth in what Stanton is saying, though. It’s true that, in general, most people who vape do continue to smoke. Even if they cut down the amount they smoke – which it appears they usually do – this isn’t as good as if they’d quit smoking completely when it comes to reducing the health risks.

You could choose to focus on these people when talking about the benefits of various approaches to quitting. You could say, “Medications aren’t risk-free, and most people who try to quit smoking using medications continue to smoke,” and try to claim that medication are therefore more trouble than they’re worth.

But nobody does that. And for good reason. Most people who try to quit smoking using medication will fail, but they’re more likely to succeed than if they try to quit with no help. Making a big deal out of the fact that most people fail doesn’t make any sense when there is no method available where most people succeed. It would be denigrating existing methods in favor of a completely hypothetical one.

Glantz tries to support his criticism with the claim that e-cigarettes actually reduce quitting rates, citing his meta-analysis in support. Unfortunately for Glantz, this study contradicts the results of the best evidence we have – which shows that vaping likely does help smokers quit and suggests it also helps with cutting down – and was met with stern criticism from experts in the field. In a word, the claim is nonsense.

If there was evidence that dual users don’t usually cut down the amount they smoke (rather than the opposite from other studies and no supporting evidence in this one) and if a hypothetical quitting method with over a 50 percent success rate existed, then he would have a good point. But there isn’t and he doesn’t.

So Stanton Glantz has taken a study that provides evidence that vaping is much safer than smoking and attempted to twist the results into the opposite. The claim that vapers would be better off smoking is outrageously wrong, and his slightly more nuanced take that most vapers are dual users and therefore at greater risk is still ultimately wrong. Yet again, Glantz has revealed that he isn’t a true scientist: he is an activist who misuses science to support his pre-existing view.