South Beach Smoke is a big name, and the e-cigarette they’ve produced is deserving of their reputation. Aside from limited battery life on the Standard option and some limp flavors, everything else is excellent, making the e-cig worthy of serious consideration. If you can get over the bland design of the South Beach Smoke e-cig, the product is extremely impressive. You get a responsive battery, ten flavor options and satisfying clouds of vapor. The “Standard” battery doesn't last long, though, and some of the flavors could use a little more punch.
Price: $19.99

South Beach Smoke is a well-established name in the world of electronic cigarettes. Founded in Florida in 2010, the company gained an initial following and started amassing a loyal customer base. They've recently updated their product, aiming to offer an improved battery and higher-quality cartridges than when they were a hungry young start-up. The old three-piece Premium model (with a reusable atomizer) has been replaced with the industry-standard two piece design. If you’re considering making the switch to e-cigs or switching manufacturer these improvements (including the now US-made cartridge ingredients) are a big draw for South Beach, but is it really worth the investment?

South Beach Smoke and EverSmoke are both manufactured by the same company, so in terms of performance there is undoubtedly some similarity between the two e-cigs. Frankly, the biggest difference is a cosmetic one, with the South Beach battery colored paper-white and sporting the faux rings many companies opt for, in comparison with the more technological appearance of the EverSmoke. With interchangeable cartomizers, you needn't even be limited by the difference in flavors offered by the brands.

The Deluxe Starter Kit comes with a Standard and High-Capacity battery (either manual or automatic), a USB charger and five cartridges. It’s currently priced at $19.99 on special offer, putting it right in line with brands like Green Smoke in terms of price. If you're hoping to reduce your expenditure, you can always opt for the stripped-down Express Kit ($21.99), which comes with one Standard battery, USB charger and two cartridges to get you started.

The South Beach Smoke Deluxe Starter Kit doesn’t rock the boat in terms of design, opting for the cardboard case with magnetic closing clasp like the majority of companies. It’s sleek and black in color, overlaid in a bright, electric orange. Behind the logo, there’s a multi-colored, spiraling smoke design which looks like a DNA double-helix as designed by somebody twisted on LSD. The two batteries sit in felt-lined foam on the top layer, and the remainder of the starter kit is sat in some molded plastic in the bottom of the box. The e-cig itself is two-piece in design, with the cartridge end screwing securely onto the battery, leaving only two thin gaps for air-flow. It’s pen-sized and generally cigarette-like in appearance, although on the whole it’s quite heavy. The tip has the diamond style often favored over the more bland grey plastic, lighting up in pale amber as you inhale. In practice, it isn’t really bright enough to see light up, aside from two tiny holes in either side of the tip. The biggest set-back in terms of design is the large logo on the battery itself, which is the entire company name (which stretches down around half the length of the Standard battery). It’s overkill, since the “O” logo with smoke emanating from the center would have been more than adequate, but ultimately something forgivable if it performs well enough.

You get a choice of five nicotine levels with the South Beach Smoke e-cig, ranging from No Nicotine, to Ultra Light (6mg), Light (12mg), Full Flavored (16mg) and Bold (24mg). The 24mg option is great for heavier smokers or vapers looking to make the switch, but the absence of an 18mg option is unusual. It’s not really much of an issue (as there’s one with only 2mg less nicotine), but keeping them evenly spaced apart would make it easier for anybody who wants to manage down their consumption. As things stand it may be a little more difficult for a “Bold” vaper to step down to the Full Flavored option, but from that point on it should be much simpler.

A bigger problem is that e-cigarettes that look like cigarettes (called cigalikes) are generally less satisfying than more complicated e-cigs. This can be a bit of an issue for smokers who want something that's both simple and satisfying, but some devices do strike this balance. The JUUL from Pax uses “pods” (which work in the same basic way as South Beach Smoke's cartridges), but these use a high nicotine level (50 mg/ml) and nicotine salts (the type of nicotine found in tobacco) to make it one of the most satisfying e-cigs on the market. If you've struggled to quit using basic e-cigs before, but don't want to jump right into mods, check out our JUUL Vapor review to see if it's right for you.

You get plenty of vapor with the South Beach Smoke e-cig, easily comparable to V2 Cigs, Green Smoke and the other market-leaders in this department. It’s smooth on the draw, with a satisfying throat-hit and a comforting cloud of thick white vapor. The standard advice – to prime automatic batteries with a few short puffs before using – isn’t even necessary with the South Beach Smoke e-cig, as even a single drag gives you more than enough vapor to fulfill the sensory desire. It’s a dense fog, easily comparable to what you’d expect from a puff on a tobacco cigarette – so no complaints in this department at all. 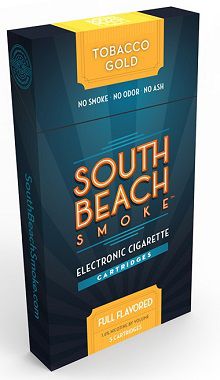 Flavor-wise, the South Beach Smoke cartridges vary wildly. The three tobacco options, Blue, Classic and Gold, are well-executed on the whole, although the Turkish tobacco inspired Gold has the musty edge you’d expect, which slightly ruins the taste, for me at least. The Menthol cartridge is a powerhouse, so much so that vaping it at length is a bit of a challenge, like someone firing a volley of ice fragments directly into the back of your throat. The Peppermint is the savior for their minty cartridges, offering a much more manageable and refreshing hit of icy mint.

The sweeter cartridges (Vanilla, Cherry, Chocolate, Piña Colada and Peach) are on the whole well done, but pretty much all of them don’t quite taste as strongly of their intended flavor as you’d like. They are all still enjoyable, but the lack of punch behind them turns what would be a positive – the delicious underlying flavors – into a frustrating negative. You puff away in the hope of getting a more satisfying hit of the flavor next time but consistently fail and are left feeling unsatisfied. Cherry is probably the best of the bunch for the sweet flavors – likely due to the fact that this one does come through strongly – but there are better versions elsewhere.

As mentioned earlier, the EverSmoke cartridges work with South Beach Smoke e-cigs, so there are more options than these available. They don’t have e-liquids or blank cartridges though, so you’re pretty much limited to disposable cartomizers. Overall, the flavors are better for vapers looking for a decent tobacco emulation or even a hard-hitting menthol, not for lovers of fruity and sweet flavors, and the options available might not suit those looking for a more customizable experience. The battery on the South Beach Smoke e-cig was the primary focus of the improvements, so now they run at 4.2 volts, in comparison to the standard of around 3.7, which contributes to the impressive vapor production. If you use the extended battery heavily, it will run out after around four hours. In practice, this means that in normal conditions, it’s plenty for a full day of vaping. According to the marketing literature, the High Capacity battery offers between 500 and 600 puffs, which is obviously under ideal conditions (as it always is). We’d put this at 500, and you’d have to vape economically to achieve that. This is nit-picking, though, objectively the High Capacity option is an excellent pen-sized battery. It’s also very responsive, with no lag issues when you inhale and driving the atomizer (the small heater which converts the liquid to vapor) quickly and effectively.

The Standard length battery (which should realistically be referred to as “short”) doesn’t last as long, but can get you through an evening if you drain the main one while you’re at work. According to South Beach Smoke, this one is good for 300 to 400 puffs, but we’d put this one at the lower end of this range under ideal conditions too. Bear in mind that manual batteries generally run out 25 percent quicker than automatics. They charge pretty quickly though, with the smaller battery taking around two to three hours and the larger one taking up to four. The charger is the USB pen-drive style, with a multicolored LED light to tell you when it’s done. A wire would have been appreciated, since an e-cig sticking straight out of a pen-drive can be a little unwieldy. It’s also worth noting that if you have an older South Beach battery, you need a new wall charger if you upgrade to the newer SuperMAX ones.

The fact that the ingredients for South Beach’s smoke juice are made in the US serves as a stamp of approval for their quality. Although the batteries are manufactured in China, the quality of them isn't in question. There were no problems whatsoever throughout the testing period, and the general fit and build quality of the components allays any fears that this was produced on-the-cheap. South Beach Smoke clearly cares about putting out reliable and well-built e-cigs.

If there is any doubt, the warranty is impressively robust for anybody enrolled in their Home Delivery Program, offering a lifetime of replacements for any non-functioning components. This is a great deal in terms of warranty, but the Home Delivery Program does cost at least $33.20 per month (for 15 cartridges). This represents a saving of around 30 percent on the cartridges (plus shipping), but in most cases you’ll need more than 15 cartridges to last you month. You're free to cancel this at any time, and you can also change the frequency of your shipments and the number of cartridges you get to suit your needs. There are some advantages to having a monthly shipment of cartridges, but this option may not be right for everybody.

If you’re not enrolled in the Home Delivery Program, you get this same offer but only for a year. Of course, the warranty will not cover you if you've modified or otherwise misused the components of the e-cig. Overall, they’re fantastic in this department, although they do mainly look out for their repeat customers in the long-term. There’s also a 30 day money back guarantee in case you’re not happy with the e-cig on the whole.

The South Beach Smoke e-cig is one of the best e-cigs you’ll find on the market, but there are a couple of issues which hold it back. The design is a little inelegant, with the grey logo on the battery making the entire thing look a little bland (even compared to its sister e-cig, EverSmoke), and the flavors are hit and miss. However, with the level of vapor you can expect, plenty of nicotine levels and a responsive battery, it’s still hard to fault overall as an e-cig. It’s definitely worth checking out other options, but you won’t be disappointed if you decide to go with South Beach Smoke.