The Smok XPro M45 is an upgrade for the lower-power M36, boasting between 6 and 45 W of power, a minimum resistance of 0.2 ohms, an in-built 2200 mAh battery and the ability to vape while charging. But does the device have what it takes to stand out from the competition? It isn’t the best box mod in the world, but the Smok XPro M45 has plenty on offer to keep vapers happy. It works excellently, firing pretty much any atomizer and heating your coils efficiently. Unless 45 W isn’t enough for you, you won’t be disappointed. Little powerhouse box mods are all the rage at the moment. With options like the iStick, the iPV 2 and many others on the market, all increasingly amenable to high power and low resistances, making the choice isn’t easy. The Smok XPro M45 steps into this competitive field as an upgrade for the lower-power M36, boasting between 6 and 45 W of power, firing coils as low as 0.2 ohms, an in-built 2200 mAh battery and the ability to vape while charging. The price is also pretty competitive, coming in at around $60.99 (£39.99) from E-Cigarette Direct and $55.99 at MadVapes, but does the device have what it takes to stand out from the competition? Our Smok XPro M45 review puts it to the test to find out. The Smok XPro M45 comes in a standard cardboard box, along with a small instruction booklet, a USB charging cable and an eGo adapter, meaning as long as you have an atomizer and some e-liquid you’re good to go. The inclusion of the eGo adapter is a nice touch, giving you the option of using eGo-threaded clearomizers without having to pick up any extras or use a beauty ring when you’re using a standard 510 device (like you have to on the MVP, for instance).

The M45 is a compact little device, measuring just 3 and 1/3 inches tall (85 mm), around 7/8 inches back to front (22 mm) and just over 1 and 14/32 inches wide (37 mm), making it more easily portable than many comparable options. The body is aluminum, with “Smok” and “XPro M45” printed on the front and back, a series of grooves on one edge and a trench on the other, with the fire button, a flattened-oval screen and the “+” and “−” buttons to adjust the power lined up inside. The appearance is pretty good, overall, not doing anything outlandish and keeping all branding to a minimum. You can pick it up in grey, silver, blue and pink from E-Cigarette Direct, with black and gold also available from other sellers. Most of the action happens on the screen-edge of the device. The fire button is located above the screen, positioned so your index finger falls naturally onto it when you grab the device. The screen itself has a DNA-style display, with your atomizer’s resistance, a battery level indicator icon and the current voltage on the left, with the currently selected wattage shown prominently on the right half. The “+” and “−” buttons are circular, but smaller than the fire button, and there’s a small hole you can poke something in to reset the device between them. The device is compatible with 510 and eGo-threaded atomizers (the latter with the help of the adapter), and has an adjustable brass contact point to help you avoid any connectivity issues by raising or lowering it with a flat-head screwdriver. The connection also has a small trench cut into it to aid with airflow, allowing air to come up through your atomizer’s 510 connection as you inhale. The bottom of the mod has a mini USB port for charging, slightly recessed to ensure a secure connection, but with the position making it pretty difficult to keep the device stood up during charging. There are also a set of five vent-holes in the bottom, arranged like the spots on a die, to provide some physical protection against any overheating issues with the in-built battery.   Overall, the M45 is well-designed and offers all the compatibility options you’re likely to need. 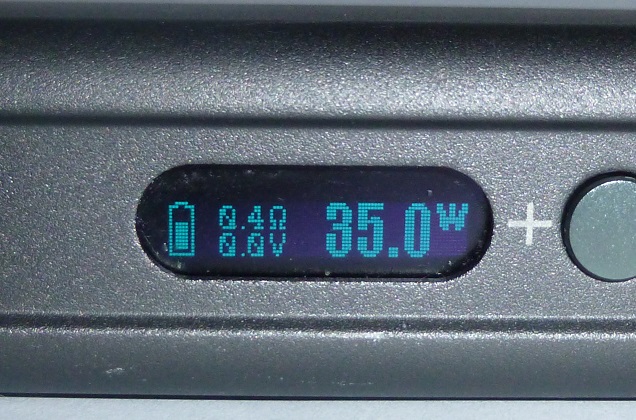 The M45 has all the features we’ve come to expect from VV/VW mods and a little extra. First off, you can adjust the wattage going to your atomizer from 6 to 45 W in 0.1 W increments, offering a wide range of powers that will be suitable for the vast majority of vapers. Many comparable devices go up to 50 W or even higher, but unless you’re looking for something that packs serious power, it’s hard to see that being much of an issue. You can also pick up an M50, M65 or M80 Plus (packing 50, 65 and 80 W, respectively) if you need the extra power.

Of course, there’s an in-built resistance checker, and the device will happily fire anything from 0.2 to 4 ohms, giving an ample spread of resistances for almost any vaper. The device also has protection against short circuits, low resistance, high input voltage and high temperature, and you can lock it by pressing the fire button five times in quick succession (to protect against accidental activation). You can also use the M45 during charging (pass-through), which is a great feature for any vapers without a spare device. The device also turns off, with the option accessible through the bare-bones menu on the device.

An extra feature is mechanical mode, which offers the raw battery voltage in the same way as a mechanical mod. This sounds good on paper, unless you use that paper to do the math: with the 16 A limit on the device and a 0.2 ohm coil, the maximum wattage allowed is just over 51 W, meaning it offers very little above what you could do in the standard mode. Perhaps some vapers would like the option, but to me this seems like an effectively pointless feature, more intended as a selling-point than something you’ll genuinely need or want.

In use, the M45 works beautifully: a dependable device that’s fantastically portable and very easy to use. E-Cigarette Direct points out that it isn’t a beginner’s device, but realistically you couldn’t get a VV/VW device that’s much easier to use than this. Most of the time, all you need to do is connect your atomizer, select a wattage using the power up and down buttons and vape away.

The information you need is all displayed clearly on-screen (although the voltage is only displayed when you press the fire button), and you have plenty of in-built protection there to keep your mind at ease. Granted, a beginner would feel more comfortable getting started with an eGo style device, but if you want to jump right to something with a bit more capability, this is an excellent option.   The M45 is reasonably responsive, with the device firing with only a slight delay after you press the fire button, and heating your coils quickly and efficiently. Couple this with the amenability to a wide range of devices and resistances and you have a mod you can feel confident throwing pretty much anything onto and having a vape. Although most vapers won’t have much of an issue with the size of slightly bigger box mods like the iTaste MVP, the reduced size of the M45 makes it easy to slip into a pocket, bag or purse and take with you when you’re out of the house. The battery life is pretty substantial too, easily lasting for a day of heavy use at a respectable power (20 to 25 W), and if you use it less or are a bit more conservative in your power setting, it’ll comfortably last two days before hitting you with a “Weak Battery” message and making you recharge. However, the battery life is notably worse than some comparable devices, offering just 2200 mAh, compared to 4400 mAh from the iStick 50 W, for example. You can still vape while you charge thanks to the pass-through feature. The device charges up from being completely drained in about three to four hours. The menu system is also fairly simple, but only having two options – mech or wattage mode and turning the power on or off – obviously helps with that. Three presses of the fire button brings up the menu, with a sliding control icon appearing immediately for changing between wattage and mech mode and another press bringing up the power symbol to allow you to switch the device off. You have to wait on the option you want for a couple of seconds before the current setting is displayed, and then you can change it with another press of the fire button – if the other buttons had been used this could have been made less irritating to operate. Switching on just requires five presses of the fire button in quick succession.

Selecting your wattage is also straightforward thanks to the dedicated buttons, and if you hold either button down it will advance through the settings with increasing speed, making it easy to dial in a large adjustment. It doesn’t loop around when you hit the minimum or maximum, but given the ease of selecting an option this isn’t a particularly big deal. Everything might be a little quicker if it had 0.5 watt increments, but again, this isn’t such a huge issue. Your last setting is also remembered when you switch the device off.

The battery level indicator is a nice addition, but the lack of precision makes it hard to estimate how long you actually have left – it’s a small icon and the displayed level decreases in fairly sizable chunks. Here, an option to display the remaining voltage would be ideal. You do get a percentage read-out when charging, and that would have worked much better during use too. You can fire the device in mech mode to get an idea, but mine appears to only reach 3.9 V even on a full charge, rather than 4.2 V.

Aside from a few minor annoyances, the Smok M45 works fantastically in use, doing everything you want it to and nothing else.

The manufacturing on the Smok M45 is solid, with the device coming across as sturdy and dependable. I accidentally dropped it a few feet onto a concrete floor, but aside from a very minor nick on the point where it made contact there were no problems whatsoever. The buttons do have a slight rattle, with the fire button in particular seeming pretty loose (you can actually pull it out altogether if you try). This isn’t a big issue – and is undoubtedly part of the reason the buttons press down so easily – but they could have definitely been made a little more secure.

Additionally, it’s worth mentioning that Smok doesn’t have the best of reputations when it comes to quality control and manufacturing quality. Most of the problems with the M-series are with the M80 Plus, but one reviewer ran into issues with the 510 connection on the M45. Aside from the button issues, everything seemed fine on the device I tested, but the issues some have with the manufacturer are worth keeping in mind regardless.

The Smok M45 is a very capable device ideal for intermediate-level vapers looking to upgrade from an eGo-style or cigalike device to something a litter higher-end. With a substantial battery life, a nice range of power settings, a low price and a cool, portable design, it’s an excellent option despite some minor annoyances and the pointless mech mode. Consider your options carefully, because there is a lot of competition in this area, but it’s hard to imagine many vapers being disappointed with what the M45 has to offer.