Our Smok Pozz X review takes in an-depth look at the new pod mod from the veteran vaping company. It boasts a 1,400 mAh battery, replaceable coils and a 40 W output, but is it worth picking up? The Pozz X does an impressive job of incorporating mod-like features into a pod-style device, has great battery life and performs really well with both coils. It isn’t the perfect pod system, but for a first device or something to use out of the house, it’s a solid option. Pod systems have come a long way in the few years they’ve been on the market. At first, after the success of the Juul, they pretty much tried to follow the same blueprint: automatic (puff-to-vape) operation, a small, compact battery that works at a fixed wattage and pre-filled pods. But things have been changing at the usual rapid pace for the vaping industry, and quickly the pre-filled pods became refillable pods, the batteries got bigger and soon enough, variable wattage vaping came to pod systems. Smok’s RPM is one example of this, but the latest and arguably best is the new Pozz X.

Featuring a 1,400 mAh battery, refillable pods and variable wattage up to 40 W, it could well be the ultimate pod system. But does it really do enough to compete in the competitive field? Our Smok Pozz X review takes a look to find out. However, the device hasn't hit stores yet, so we'll update this with the price when it does.

Disclaimer: The Pozz X was provided free of charge by E-Cigarette Direct for the purposes of this review. But as always, what follows is an honest appraisal of the device and what it can do. The Pozz X comes in a standard Smok-style box, with the Pozz X, a pod (with a 0.4 ohm mesh coil pre-installed), and a spare 0.6 ohm RPM coil, along with a USB charging cable. This is really all you need from a new device, so there are no complaints – all you need to start vaping is some e-juice.

The Pozz X has a fairly traditional pod vape look. It stands about 10 cm (4 inches) tall, and has rounded corners and the pod doubling as a mouthpiece at the top. The large faces of the body have designs, with nine different options in total including differences in color. My device is the black and white camo version, but you can also get green camo, a black or white carbon fiber like design, and resin versions in purple, blue, orange, yellow and gray/7-color. Each of these has their own appeal, and while you’ll undoubtedly have a favorite, they all look pretty cool. The front face also has the button (the only one on the device) and the multi-color display screen, as well as the “Pozz X” logo at the top.

Overall the Pozz X does a great job from an aesthetic perspective, balancing the classic pod-device form with nice design elements and a user-friendly interface.

The display on the Pozz X is a step above what you’d expect on most mods, much more so for pod-style devices. The display itself is simple and well-presented, with your wattage shown at the top of the display, the firing voltage and resistance of the coil below it, then a puff timer and counter at the bottom. There’s also a battery level indicator in the top right. It makes good use of color without being too excessive, with yellow borders around the counters at the bottom, blue icons next to the resistance and voltage readouts, and a green padlock symbol to indicate whether the Pozz is locked. The pods are arguably the most important part of any pod device, filling the role of tank, mouthpiece and atomizer all in one unit. The Pozz X’s pod has a pretty straightforward design, with the inward-curving mouthpiece section at the top taking up the majority of the body, and a small straight-sided section at the bottom where it connects to the rest of the device. Around the side of this straight section is the fill hole, which is covered by a rubber flap (with a stopper to plug the fill-hole) that you can move off to the side when you’re refilling the pod. There’s a hole in the bottom where you push the coils into place (no need to screw anything, just push them in and you’re good to go).

There is also an airflow control system at the very bottom of the pod, which is a welcome addition that isn’t particularly common on pod-style devices. There’s a circular rim surrounding where you insert the coil, which has two sections cut out of it and rotates to either open up or close the airflow around the base of the coil. This offers an impressive level of airflow control for a pod-style device, with the fully-closed option still having enough airflow for a comfortable mouth-to-lung vape (like when you draw on a cigarette) and the fully-open option being more like a sub ohm tank and great for direct-to-lung draws.

The Pozz X is a really well-designed pod system, bringing mod-like features into a simple and compact package. Variable Wattage Up to 40 W

The major feature on the Pozz X is variable wattage vaping, which still isn’t particularly common on pod-style devices despite it being basically ubiquitous on mods. The Pozz X allows you to set any wattage up to 40 W, which you adjust in 1 W increments by pressing the fire button three times, cycling through the options by pressing again, and then waiting a few seconds when you’ve settled on the wattage you want. To get back to the lowest setting (5 W) you just cycle all the way around. 40 W might not seem like a huge maximum, but for a pod-style device it’s really more than you’re likely to need. You can also lock the button of the Pozz X using the device’s small menu system. Pressing the fire button five times in quick succession takes you to the menu, which has three options: lock, power off and clear the puff counter. You unlock the keys by going to the menu again and choosing unlock. This is a handy feature for when you’re carrying the Pozz X in a pocket, but really it works just as well if you switch the device off and then back on again.

Smok Pozz X Review – In Use The 0.4 ohm coil included in the Pozz X kit is the better option if you’re using standard e-juices, but it also works well with salt e-liquids too. The mesh coil produces an impressive amount of vapor from reasonably low power settings, more than enough for just-switching smokers and even satisfying to long-term vapers as long as you aren’t looking for humongous clouds. The flavor from the coil is also really good, with the different components of your juice all coming through clearly and strongly.

The 0.6 ohm coil is a triple coil, and it’s the option better-suited to nicotine salt e-juice, although it can be used with ordinary juice too. The coil has a slightly tighter draw than the mesh option, which makes it ideal for mouth-to-lung vaping, but not really suited for direct-to-lung even with the airflow all the way open. The good news is that the vapor production is still good, not quite at the same level as the mesh option but more than enough to keep you happy. The flavor is hard to fault, though, about as good as the mesh coil.

The battery on the Pozz X is one of the biggest selling-points, at 1,400 mAh it’s much bigger than any basic pod system and up there with many sub ohm pen devices. The big difference is that it you don’t need to run the Pozz at huge power settings to get great vapor production or a satisfying hit of nicotine, so this is really quite a huge battery when you consider everything. In practice, it lasts for about 200 puffs or a pod’s worth of e-juice. With nicotine salt juice this is easily enough for a day’s worth of vaping, and even with standard e-juice it will get you through most of a day.

Charging is really quick too, with the Pozz X going from being completely dead to recharged in around an hour. You can vape while charging too, which is a great feature if you’ve just started vaping and only have one device.

Overall the Pozz X does really well in this department.

As beginner-friendly devices, ease of use is one of the most important things for a pod system, and the Pozz X really shines here too. Changing coils is easy because you just push it in place, and filling is about as simple as it can be thanks to the foolproof system for the fill-hole. 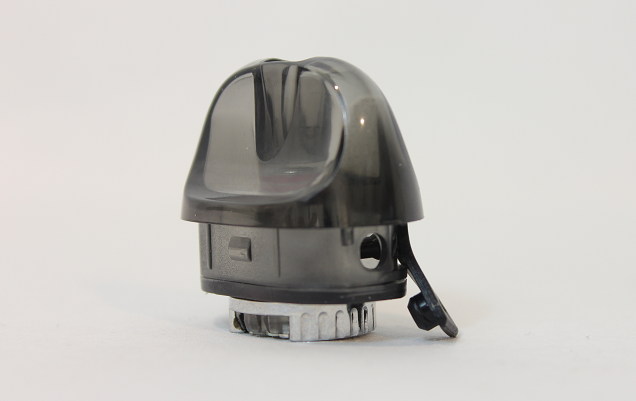 For most pod devices, these are the only two things you need to do, but the Pozz X is a little more complex than most because of the variable wattage. The system could be a little better – really two adjustment buttons would have helped massively – but overall it’s quite easy to pick up. The menu has a similar problem: you have to cycle through the options by pressing the key and accept your choice by holding it down, but having some extra buttons would have helped.

Overall, though, the Pozz X is really easy to use and beginners won’t have a problem. Learning the button-push combinations only takes a minute and from there it’s basically smooth sailing.

The Pozz X’s small size makes it very portable, and an ideal choice if you’ll be vaping out of the house a lot. The device is easily small enough to slip into your pocket, and considering the size of the battery this is a really big plus-point, it balances the two needs perfectly. The rounded edges also make the Pozz X comfortable to hold, and the fire button is big enough that you can casually push it with the side of your thumb without having to worry too much about being accurate. The Pozz X seems pretty well-made, with a solid structure that feels like it would stand up to knocks and drops pretty well. For the most part, the buttons and parts on the device work just as they should, although the pod itself doesn’t sit snugly enough in the device and there’s a slight wobble if you move it to the side. It could also be a little easier to remove, but partially this is a necessary evil to avoid it coming out unintentionally.

If you’re in the market for a pod-style device, the Pozz X is a fantastic choice. It performs well, has enough features to keep even longer-term vapers happy and it has a good, long-lasting battery for such a compact device. It’s worth mentioning that it doesn’t really offer much that the RPM 40 doesn’t, and in fact its single button makes it a little less convenient to use. But even with that in mind, the Pozz X is still an excellent pod system that you’re unlikely to be disappointed with.