A new study looking at one-year quit-rates for smokers purchasing their first e-cigarette at vape stores in Sicily has found that around 41 percent quit smoking entirely and another 25 percent reduced their cigarette consumption by at least half. The finding contradicts claims that there is no evidence e-cigarettes help you quit smoking, and joins other research in suggesting that quit-rates with e-cigs dwarf those obtained with over-the-counter nicotine replacement therapy (NRT). With the evidence – both real-world and clinical – increasingly suggesting that e-cigs can boost quit rates in comparison to nicotine patches, gums and other NRT, the irrationality of jeopardizing the availability of effective devices with burdensome regulation is becoming more obvious every day.

The Study – Do Smokers Visiting Vape Shops End Up Quitting?

The study (full text is free) recruited 71 smokers visiting any of seven vape stores in Catalina, Sicily, and followed them over the course of a year to determine how many quit smoking. When they first visited, smoking histories and general demographic information were taken, and they were assessed for their level of nicotine dependence. They were given basic instructions on how to use their devices by the store employees, and they were encouraged to use them to help them reduce the number of cigarettes smoked per day. They checked up on their progress towards quitting smoking at 6 and 12 months from the start of the study, and also kept track of the products they used. Anybody not returning for follow-up was classed as returning to smoking.

There are a few limitations to this approach to keep in mind. Firstly, the participants chose to go to the vape store, so vaping obviously appealed to them, so the sample was ultimately self-selected. This isn’t a big deal – after all, that’s how it works in the real world – but it’s worth noting that quit-rates will likely be lower if those without a pre-existing interest were given an e-cig (or it was suggested for a random smoker by a doctor, or indeed if assigned for a clinical trial). The sample size was also relatively small, which doesn’t nullify the findings but means that chance variations can have a greater impact on results, and quitting was only self-reported, rather than being verified biochemically.

Overall, the study showed that a sizable proportion of first-time vapers either quit smoking or reduce their consumption by over 50 percent after a year. At the start of the study, the smokers had an average Fagerstrom nicotine dependence score of 5.6, which corresponds to moderate dependence. This wasn’t re-tested at the end of the study (although other evidence suggests it would have reduced), but it shows that we aren’t dealing with light smokers with minimal levels of addiction. At the 12 month mark, 40.8 percent of participants (29/71) had stopped smoking, at least for the 30 day period prior to the follow up (with not even a puff taken). At six-months, this was 42.2 percent, suggesting that those who quit towards the start of the study generally maintained abstinence. 25.4 percent of the participants (18/71) reduced their smoking by at least half (for the 30 days prior to follow up), and 15.5 percent of them (11/71) reduced their daily smoking by 80 percent or more. The rest were classed as failing to quit, and the majority of these didn’t return for follow-up.

For the whole group, the number of cigarettes smoked per day went down from an average of 24.9 at baseline to just 2.6 after 12 months, and for the 66.2 percent who either quit smoking or reduced by at least 50 percent, their average daily consumption went down from 24.7 to 2.2 cigarettes per day. 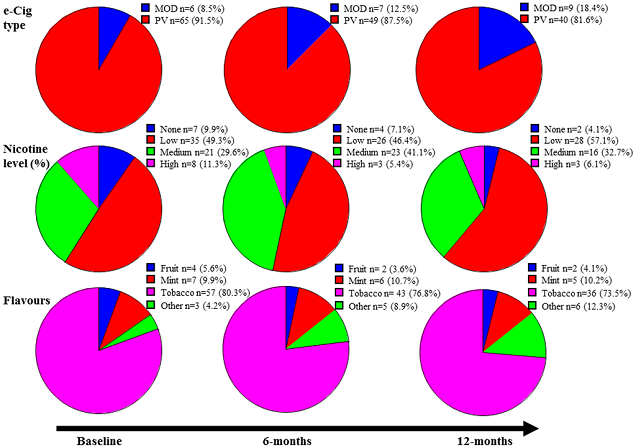 The differences in devices and flavors used from the start to the end of the study were only minor, but do potentially suggest that mods are more beneficial for helping smokers quit. The percentage of participants using mods increased from 8.5 percent at the start of the study to 18.4 percent at the end of the study. However, the absolute numbers only increased from 6 people to 9 people, with the primary reason for the notable increase in percentage apparently being that more eGo-style device users dropped out. In fact, with 22 participants dropping out, and the number of eGo-style device users decreasing by 25, it would suggest that no drop-outs were from the mod group, with 22 eGo users dropping out at the remaining three switching to mods (this isn’t definite, though; mod users could have dropped out and been replaced by more upgraders).

For nicotine levels, the overall trends appear to support a switch to lower nicotine levels – with the percentage using low nicotine (defined as 4 to 9 mg/ml) increasing from 49.3 percent to 57.1 percent from the start to the end of the study and the percentage using high strength (19 to 24 mg/ml) going from 11.3 to 6.1 percent. However, the trend doesn’t appear to be a particularly strong one when you look at the charts from the study, and is further complicated by drop-outs. For flavor, unusually, tobacco was consistently more popular than fruit or other flavors.

Are You Better Off Buying E-Cigs or NRT for Quitting Smoking?

The study – albeit with a limited number of participants – shows that e-cigarettes produce quite substantial quit-rates in self-selected users. Although smokers should look for further support when trying to quit, most don’t. The fact is that of the few smokers who do look for any support, the most commonly used approach is nicotine patches (at least prior to the increased popularity of e-cigs). Clinical trials for NRT don’t exactly produce impressive quit-rates, with a maximum of 8 percent success, compared to a maximum of 5 percent for “cold turkey” quitting. But what about studies more like this one?

A meta-analysis of the effectiveness of the effectiveness of NRT when given over-the-counter suggests that quit-rates at six months are a measly 7 percent, in comparison to 42.2 percent at six months in this study. This would suggest that e-cigs are a massive six times more effective than NRT in an over-the-counter setting, as long as bigger studies produce similar quit-rates to this study in the future. A couple of the NRT studies had lower quit-rates than the other five included in the meta-analysis, but the most effective five still only had a quit-rate of 9 percent at six months. Even six week abstinence rates from specific studies are much lower (16.1 percent) than those observed after a whole year in this study.

The only direct finding comparing over-the-counter NRT to e-cigs found that users of e-cigarettes (when users chose their own approach) were 63 percent more likely to successfully quit smoking. Although we need more evidence to precisely pin down quit-rates, everything we know so far suggests that modern e-cigarettes (not cigalikes) are much more effective for helping smokers quit than NRT. Even clinical evidence on cigalike models suggests that they’re marginally better than NRT.

Regulations as proposed by the FDA would likely leave primarily cigalike devices on the market, and evidence is mounting that this would be a tragedy – as long as your goal is helping smokers quit or reduce their cigarette consumption. While findings with cigalikes still show that they help smokers quit, every study looking at higher-end devices has suggested that they’re better for delivering nicotine, more effective at reducing cravings and better for helping smokers quit. NRT is pretty much dead in the water as a quitting strategy: finding after finding is demonstrating that e-cigarettes are much more effective, especially for high-quality devices in real-world settings