Our Nu-X CBD Disposables review takes a look at the five disposable CBD vapes on offer from the company. They’re CBD specialists, but how do their vaping products stack up? If you’re just looking to test out CBD vaping before picking up a rechargeable device, the Nu-X disposables are a great choice. They’re easy to use and perform well, and although not all the flavors are great, for the most part you get a consistently enjoyable experience.
Price: $19.99 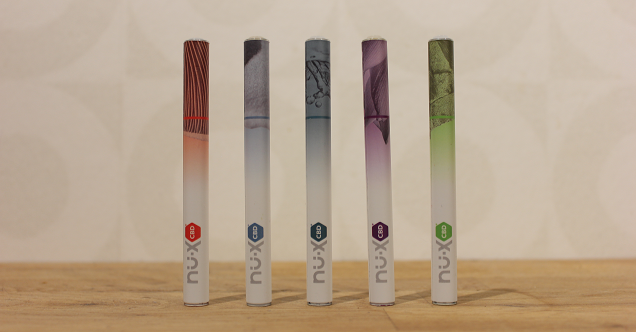 CBD is taking off all over the world, and vaping is an increasingly-popular way to get your CBD, with tons of e-liquids and CBD-focused vape pens on offer from a huge range of brands. But unlike the many vaping brands just incorporating CBD products into their existing line-up, Nu-X is completely dedicated to offering top-quality, pure CBD e-liquids and tinctures. Their product line includes e-liquids, tinctures, concentrates and disposable vape pens. Although all of their products look great, we’ve taken a look at their disposable CBD vape pens for this Nu-X CBD Disposables review – are they worth $19.99 per pen? The disposables are pretty simple in terms of what you get. Each one comes in a simple box with your disposable visible through a little window in the front. Of course, it’s a disposable, so there are no chargers, spare cartridges or anything like that: you just get the device and nothing else. The vape pens from Nu-X look a lot like cigalike e-cigarettes from back in the early days of the industry. They’re uniformly cylindrical, with a white background and a color scheme that reflects the flavor of the pen. For example, the Rhea tropical berry option has a purple coloring, and the Sedona lemon and pine blend has a green color. The color is primarily on the mouthpiece section of the pen, with a flower-like design around the base, a solid band of color to separate the “butt” part of the cigarette-like shape from the main section, and the color serving as a background for the smiley face on the tip. The Nu-X CBD logo and the flavor name are also printed on the main body of the disposables, with the “CBD” part and the flavor name sharing the same color.

It might not sound too impressive, but overall the disposables do a really good job aesthetically, and even with the fairly large logo on the body of the devices they still look pretty cool overall. The mouthpiece on the disposables is pretty basic, but it’s worth talking about because it’s the most important design feature of the devices. It doesn’t depart from the cylindrical shape of the main body, so it’s not the most comfortable thing to hold between your lips, but the tips have a transparent cover, with a hole in the center for the air to come up through the cartridge. It works pretty well despite the discomfort from the shape, so there are no major complaints here. The last major design feature on the Nu-X CBD disposables is the light-up tip. This has a smiley face logo on the bottom, and lights up a pure white when you take a puff. There isn’t much to add here, it responds well when you puff on the device, and it’s bright enough that you’ll always know when it’s activated.

The design of the Nu-X disposables is straightforward, but it does everything it needs to and the pens look pretty cool too.

Although vapor production isn’t as big of an issue for CBD pens as nicotine vaping devices in general, many CBD vapers still want a satisfying amount of vapor when they take a puff. The Nu-X disposables do a really good job in this regard, despite being around the size of cigalike e-cigarettes they still put out a satisfying amount of vapor. It isn’t huge, but it’s enough visual feedback for most vapers, and easily in line with what you’d expect from a basic vape pen. The Nu-X CBD disposables come in five different flavors, and we’ve tested all of them out for this review. Here’s a run-down of what each one tastes like:

Overall, the flavors from the Nu-X disposables often have kind of pine, foresty elements that might not be to everyone’s taste, but when you get used to the core taste they’re all actually really enjoyable. Flavors like Azure and Oceana are the best options for more, but there is enough variety in there to please most vapers.

Do You Get Enough CBD?

Each of the disposable pens contains 150 mg of CBD, and they definitely get it to you efficiently enough to suit most people’s needs. After five minutes vaping, you can definitely feel the effects of the CBD, and although it might not be the ideal approach if you need a lot of CBD every day (the tinctures or CBD e-liquids from Nu-X, or other re-useable devices are probably better in this case), they do work well for less heavy users. I’m not using the CBD for any medical reason, so I can’t offer too much guidance here, but it’s easily as effective as the re-chargeable CBD vaping products I’ve tried, edibles and tinctures.

How Long Do They Last?

As a disposable vape pen, the battery life is one of the most important issues to consider before you make a purchase. Of course, this does depend on how much you vape, and ultimately on how much CBD you use, so your mileage may vary, but overall the pens offer an impressive amount of battery life. The pens lasted me around two to three days’ worth of vaping each, although it’s worth noting that I probably wasn’t vaping as consistently as someone who uses CBD medically.

Nu-X CBD Disposables Review – In Use The CBD disposables from Nu-X are pretty compact and do a good job when it comes to day-to-day use. However, as disposables there is only a limited amount that needs to be said: they’re as easy-to-use as can be because you just take them out of the pack and puff from the end to vape, and you don’t need to change cartridges or anything like that.

For comfort and portability, the pens are small enough to carry around in a pocket or a bag, pretty much the size of a cigarette or a simple pod vaping device like the Juul. While they could have incorporated design features that made them more comfortable to use or hold, the tube-style cigalike shape means that it isn’t exactly uncomfortable, more that they could have been better.

Overall, the disposables are so easy to use that it’s a pleasure to vape with them on a day-to-day basis.

The Nu-X CBD disposables don’t really have to be put together that sturdily, because they’re designed to be thrown away when the battery dies. But the manufacturing quality still seems really good, the pens are strong and reliable, and they’re very responsive when you go to take a puff. Overall, it seems like they went above and beyond when putting these together.

Are They Worth Picking Up?

The Nu-X CBD disposables are a great option if you’re interested in CBD vaping but unsure if it’s right for you, or if you just want to vape some CBD occasionally but not every day. If you’re a dedicated CBD vaper, you’d be better off picking up some e-liquid with CBD and a rechargeable device, but that’s not a complaint as much as it’s the nature of a disposable device. The pens last surprisingly long, have an interesting selection of flavors and do a good job of getting you your dose of CBD. For $19.99, they’re definitely worth checking out.