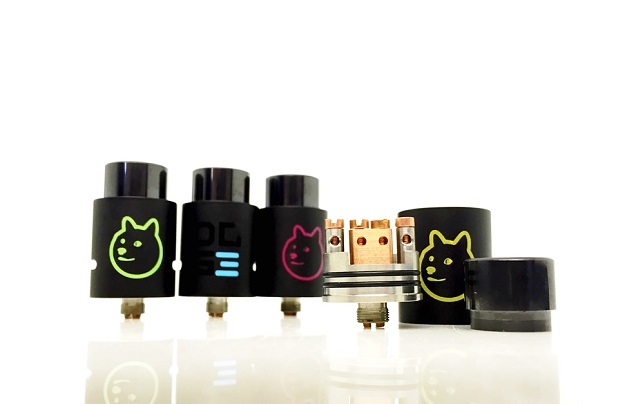 December saw a lot of awesome new devices hit the market, with the selection of temperature control capable, high-power box mods growing at its typically meteoric pace and an excellent range of sub ohm tanks and rebuildable atomizers vying for your post-Christmas purchases. So, let’s dive right in and see what vape-Santa brought for us last month. Pioneer4You’s iPV series of box mods has a lot of support from vapers, and the new D3 is an upgrade to the widely-loved and compact D2. The device has a pretty much identical appearance to the older model (aside from a slight increase in size), and it offers a slightly increased maximum power of 80 W, temperature control from 212 to 572 °F (100 to 300 °C) with nickel and titanium, and up to 75 joules (equivalent to 75 W) of output in TC mode.

It also has a voltage step down, which improves battery life by allowing you to run at voltages lower than the remaining battery voltage. The device supports coils from 0.15 ohms in standard mode and from 0.05 ohms in TC mode, and has a spring-loaded 510 connection. It runs on a single 18650 battery, which is accessed through a magnetic battery door (an improvement over the ball-bearing operated one on the D2).

The iPV D3 is available for $57.95, keeping the price low while still offering the fantastic performance vapers have come to expect from the iPV series. Kanger’s Topbox Nano TC kit builds on the success of the Subox Nano Kit, offering the new Kbox Nano 60 W TC alongside the TopTank Nano tank for a beginner-friendly mod starter kit at a great price. The Kbox Nano runs on a single 18650 battery and offers between 7 and 60 W of power, temperature control, a spring-loaded 510 connection, support for coils down to 0.1 ohms and the standard range of safety features. The TopTank has a top-fill design, a 3.2 ml capacity, a Pyrex tank, adjustable airflow and stainless steel construction, and comes with three coils – a 0.15 nickel option, a 1.5 ohm kanthal one and a 0.5 ohm Clapton coil. December was a big month for Kboxes, with the 120 W and 200 W TC versions being released (which we covered here) and the 70 W TC – which also comes with an in-built battery – hitting the market too. The 120 and 200 W versions both take two 18650 batteries, and support temperature control with nickel, titanium, stainless steel and nichrome wire, and both offer plenty of power. The temperature control checks the resistance 1000 times per second, making it a very accurate system, and the mods support coils own to 0.05 ohms.

The 70 W version reduces the features a little – as well as the reduced power, the device only supports nickel and titanium coils – but adds a huge 4000 mAh internal battery. This makes it a great option for those who don’t want to deal with separate batteries, particularly those who don’t need huge amounts of power from their mod.

Innokin is a huge name in the vaping industry, and the new Cortex 80 W sees them stepping into the temperature control box mod game. The device offers up to 80 W in power and supports temperature control with titanium and nickel coils, ranging from 300 to 600 °F. It comes with a 3300 mAh in-built battery, and supports fast charging at 2A, as well as passthrough vaping while you charge. The device has a gold-plated, spring-loaded 510 connection, and supports resistances down to 0.1 ohms. The Ikarno S1 chip inside the device offers direct current for a steady power output, and has extremely low standby power consumption. The device is available for $74.95, coming with the iSub S sub-ohm tank included (more info on the tank below). The iStick Basic was released in late November (but we missed it last month), an all-in-one style device that incorporates the atomizer into the body of the box mod, making it an appealing option for new vapers. The Basic comes with an in-built 2300 mAh battery, which is charged using the micro-USB port on the side of the device. The 2 ml capacity GS Air 2 atomizer slots right into the body of the device so the drip tip is the only part that protrudes, with the mod having a unique magnetic connection and supporting any 14 mm diameter atomizers. The mod doesn’t have variable voltage/wattage, so the voltage you get depends on the battery’s remaining charge level. The kit is very cheap, though, being available for just $34.95. This mod is a collaboration between Twisted Messes and Dovpo, featuring up to 150 W of power, temperature control from 200 to 600 °F with nickel and titanium, and support for resistances as low as 0.05 ohms. It runs on two 18650 batteries, which are held behind a 24 k gold-plated, magnetically-locking battery door, and the buttons are also gold-plated, working well visually alongside the black body of the mod. The mod is made from zinc alloy, but is finished with bonded silicone rubber to give it a soft feel. The mod also has all of the expected safety features, an invertible three-line OLED display screen, stealth mode and the ability to lock your initial resistance in temperature control mode. The mod is currently available for $129.99. The Target 75 W VTC mod from Vaporesso is a temperature-control capable mod that puts out a lot of power and allows limiting of temperature between 200 and 600 °F, firing any coils down to 0.15 ohms in resistance. The mod has a unique, ergonomic design that looks a little like a gaming joystick, with a trigger-like firing button for comfortable operation. The mod takes a single 18650 battery, and also features an OLED display, and gold-plated, spring-loaded 510 connection. It comes in a kit with the 3.5 ml cCell tank, which features organic cotton and ceramic wicks for long-lasting, flavorful coils. The kit costs $76 new, but we also have two kits up for grabs (and four tanks for runners-up) in our contest if you want to try your luck at getting one for free. The DOG3 RDA is the newest incarnation of the popular Doge RDA family, offering a 22 mm diameter dripper that builds on the success of the previous models. The atomizer features an interchangeable positive post, which you can change to be either a single or a split post, with the former having a larger post-hole at 3 mm (compared to 2.2 mm), as well as deckmilled negative posts and square PEEK insulators. The posts, screws and contacts are copper, and you also get a spare stainless steel single center post when you pick up the atomizer.

The internal airflow control has been removed, increasing the build space available while still offering airflow control via two 10 by 2.5 mm slots. The juice well is a huge 9 mm, and the device also features a wide-bore ceramic drip tip, for excellent heat resistance. The Youde/UD Zephyrus was one of the most widely-loved RTAs in our poll, and the second version builds on its success to offer what may become the go-to rebuildable tank for many vapers. The Zephyrus V2 offers a 6 ml capacity tank with a redesigned top-filling system (which allows filling without even removing the top cap), quad adjustable airflow slots, an RBA attachment with split positive post with 2mm diameter post holes, quad wicking ports and PEEK insulators, and support for pre-built coils too. All of this comes for a pretty affordable price of $29.99. The Aeolus Lite RDA is the latest addition to the Aeolus line of drippers, combining elements of the V1 and V2 Pro with the new design. The 22 mm diameter RDA maintains the signature vertical airflow system of its predecessors, offering precise control over your airflow while minimizing the risk of leaking. It has a split positive post with 2 mm post holes and 18 k gold plating for superior connectivity, and boasts a deep juice well and PEEK insulators. It comes with an 11 mm delrin top cap that supports standard 510 drip tips, and has a three-piece assembly. The RDA costs $39.99. The iSub S TC is the newest iSub series tank from Innokin: a 22 mm diameter, 4.5 ml capacity tank with a top-filling design that allows access without removing the top cap. The iSub S has an adjustable airflow system allowing for single and dual airflow options, catering to vapers who prefer a more closed off airflow as well as those preferring an airy draw. The big selling-point of the tank is the support for TC-friendly titanium and stainless steel coils, and pre-built Clapton coils are also available. The iSub S costs $19.99 alone, but it’s also available in a kit with the new Cortex mod (more info above). The Scylla Sub Ohm is the newest tank from Freemax, incorporating ceramic wicks into the coil to maximize their lifespan in comparison to standard coils and offer superior heat resistance. Ceramics also offer great wicking with a range of PG/VG ratios. The tank itself has a 4 ml capacity, dual 12 by 3 mm adjustable airflow slots, an anti-leak and anti-spitback design, and a top-filling system. There’s also an RTA build deck, with a two-post layout designed for stacked horizontal coils. The tank has a lot to offer, and costs just $29.99. 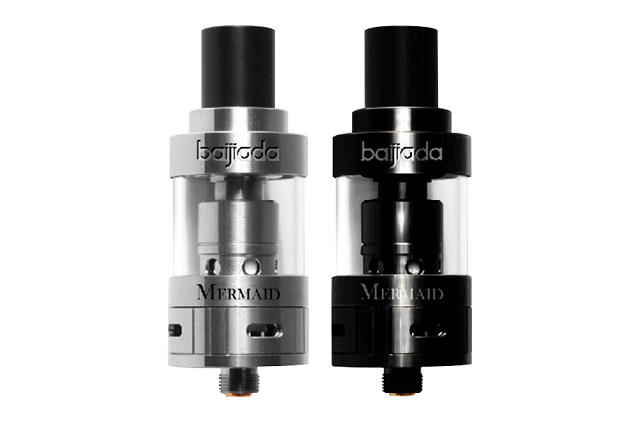 The Baijiada Mermaid tank is the new offering from Sense, the creators of the Herakles and the Cyclone tanks. The Mermaid is a 303 stainless steel atomizer, with a 2 ml capacity and Pyrex glass for the tank, and it features adjustable airflow, a copper contact and compatibility with Herakles Plus coils, as well as supporting stainless steel coils for temperature control vaping. The downsides are notable, though, with the small juice capacity being one issue and the bottom-filling design not being ideal either. It’s pretty affordable, though, priced at just $16.95.

There were a lot of great new devices last month, so we had to be a little more selective than usual in choosing ones to include in this list, and we’ve undoubtedly missed one or two excellent options in the process. If we’ve missed anything that looks particularly great, though, let us know in the comments! And if not, check back next month for more!