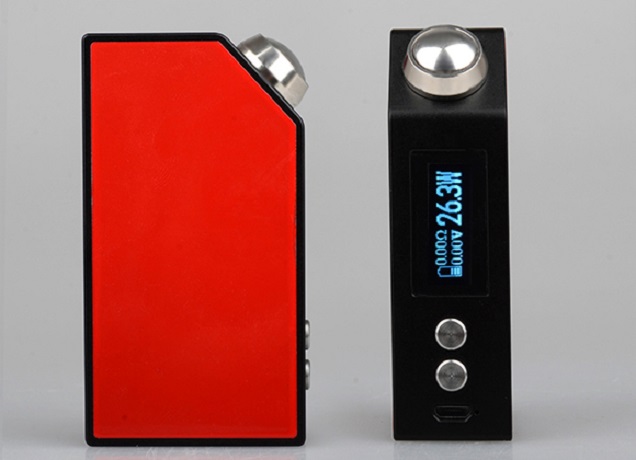 A month doesn’t go by in the vaping industry without several excellent new products being released, and September has been no exception. Several temperature controlled box mods have hit the market this month, along with a couple of notable new tanks, both sub-ohm and rebuildable. So what can you get your hands on this month? Here’s our new vaping product releases roundup for September! Building on the success of the older SMY Mini 60 W TC, the 170 TC mod takes the formula from the widely-loved older version and boosts the power output to a massive 200 W in power mode and 170 W in temperature control mod.

The SMY 170 TC offers the standard range of temperatures for nickel and titanium coils – ranging from 200 to 600 °F – and can work with coils between 0.05 ohms and 1 ohm resistance. In wattage mode, the device works with any coil from 0.5 to 3 ohms. It features a magnetic battery cover, takes two 18650 batteries, sports a sizable and unique OLED display screen and works with standard 510-threaded atomizers.

The device is currently on sale for $99.95 at DirectVapor. The Freakshow Tiny 60 W TC is a temperature-control box mod from WOTOFO, the makers of the Troll, Freakshow and Sapor RDAs. The device offers temperature control with three types of coil – nickel, titanium and platinum – and is adjustable from 200 to 600 °F, working with atomizers from 0.1 up to 1 ohm of resistance. In wattage mode, the device offers between 5 to 60 W of power, and supports coils as low as 0.3 ohms in resistance.

The device has a pretty cool design, being a standard, rectangular box mod but with a diagonal edge above the OLED screen for the large fire button, and with a cool black and red color scheme. It has an adjustable 510 connection, with gold-plated battery cap for better conductivity.

The Freakshow Tiny 60 W TC is currently available at VaporDNA for $69.99. The Presa TC 40 W box mod is another new temperature control device, and although it doesn’t have quite as much power as some of its competitors, the lower price still makes it an appealing option.

The original Presa 40 W box mod was known for its ergonomic design, with a large, curved fire button (stretching up almost the whole edge of the device and actually housing the OLED screen) for unbeatably comfortable operation. The new version maintains this (along with the 40 W maximum power output), but also adds temperature control for nickel and titanium coils, with the standard operating range of 200 to 600 °F.

Like its predecessor, the TC version of the Presa also comes with an in-built battery, but the 2300 mAh capacity is actually a slight reduction compared to the old version. But since it’s available for $49.99, it’s a competitive offering regardless. The Vox Mini is the newest iteration of the Vox series from VaporFi, and although it isn’t a temperature control device and it only reaches up to 40 W, it has had some positive feedback from vapers not looking for all the “bells and whistles” of most modern box mods.

It’s a compact box mod with all the expected features: OLED screen, a spring-loaded pin (much better than the screw-adjustment version on the original Vox), automatic ohm meter, passthrough charging and the ability to fire sub-ohm coils (down to 0.3 ohms). The lack of temperature control may be a sticking point for some, though, and the price is still pretty high at $79.99. The iStick series is still going strong, and there’s now a new entrant alongside the 40 W TC version: the 60 W TC. The device technically won’t be released until the first week of October, but there are some early reviews up, and it looks set to build on the success of the previous versions.

The first thing you’ll notice is a bit of departure from the established iStick style, with an improved shape to the mod and some sleeker buttons, and the device also requires a separate battery, unlike the 40 W TC and most other iSticks. It works in TC mode with titanium and nickel coils, with sub-ohm resistances down to 0.05 ohms, and in power mode with resistances over 0.15 ohms.

It will be available for around $50, and you’ll also be able to pick it up in a kit with the Melo 2. The Mutation xB is another new temperature controlled box mod, offering up to 60 W of power and temperature control up to 599 °F (to the chagrin of anyone with a preference for round numbers) with titanium and nickel coils. The device takes a separate 18650 battery, and works with any coils down to 0.1 ohms, in either mode.

The device also features an OLED screen and all of the expected features, but accomplishes everything for less than most devices on the market, costing just $39.99 through VaporDNA and just $44.95 at ElementVape. It might not offer anything you can’t find elsewhere, but the price makes it very appealing for any budget-conscious vapers. Vapor Shark’s DNA 200 is now available to order direct from Vapor Shark, featuring a durable finish, high-speed charging, upgradable firmware and everything else you’d expect from a DNA 20 device. The included Escribe software allows you adjust over 93 options to give you an unprecedented level of control over your vaping experience, and has eight profiles, so you can save different setups to suit different types of builds.

The Vapor Shark DNA 200 also features a gold-plated, spring-loaded 510 contact pin and a high-quality OLED display, as well as some nice extra touches like an illuminated fire button. It’s made out of 6031 aluminum, ensuring it remains sturdy but reducing the weight in comparison to the older DNA and rDNA devices from Vapor Shark. Two new box mods have hit the market from HCigar, the DNA 25-equipped VT25 and the substantially more powerful, DNA 200 VT200. The VT200 only works up to 100 W with kanthal coils (although this can be altered with the Escribe software package), offering the full 200 W in temperature control mode. Both of these devices offer temperature control from 200 to 600 °F, and come with in-built high-drain batteries (a 1300 mAh on the higher-power device and a 2000 mAh on the lower-power option).

The VT25 has an in-built battery that’s also replaceable (although HCigar don’t recommend it), and has a quick-charge function that allows full recharging within an hour and a half. The VT25 works with kanthal coils down to 0.25 (0.1 ohm for the VT200) and nickel down to 0.15 ohms (compared to 0.08 ohms for the larger mod). Flawless has entered the DNA 200 market with the new Tuglyfe 200 W, which has all of the standard DNA 200 features and comes with an in-built 1200 mAh battery. The first run of new devices has already sold out, though, but future batches will be available soon, and reportedly will be available in solid colors instead of the splatter effect paint job the first batch had.

It might not be the prettiest device, but considering how well received the original Tuglyfe box was, it will undoubtedly perform excellently and become a solid competitor in the world of DNA 200 devices.

It’s priced at $200, putting it right alongside other DNA 200 devices like Vapor Shark’s when it comes to price. The Tesla Nano 80 and 100 W TC mods aren’t technically available yet, but they’ll be starting to ship very soon. The devices both have very similar features: TC with nickel and titanium over the usual temperature range (and with resistances down to 0.05 ohms), and variable wattage on an ordinary coil as low as 0.15 ohms. The core differences are that the 80 W version offers less power and requires a separate, high-drain 18650 battery to operate. The 100 W version, on the other hand, comes with an internal dual battery cell with a capacity of 4500 mAh.

The price difference between the two is pretty small, with the 80 W version being available for $89.99 and the 100 W version for $104.99: both from DirectVapor. The SilverPlay Nano is a new RTA from Project Sub Ohm, designed as a more compact addition to the SilverPlay family of rebuildable tanks. It has a 22 mm diameter to suit most mods, and measures just 33 mm from top to bottom, keeping the whole thing very compact but only allowing for a juice capacity of 3.2 ml.

The deck has a four-post design for easier multi-coil building, featuring 1.4 mm post holes and being encased in a dome-shaped chamber. You get a slightly bell-shaped polycarbonate tank, but it also comes with a stainless steel and glass alternative for plastic-eating tanks. With plenty of airflow holes, a gold-plated 510 contact and tons of other features, it looks like a solid RTA! The new Cyclone sub-ohm tank from Sense is a “next generation” sub-ohm device that boasts the ability to be used at up to 150 W – pushing it way beyond what many vapers would have thought possible outside of rebuildables just a couple of years ago. It’s a stainless-steel bodied, 22 mm diameter device, with a glass tank capable of holding 5 ml of juice and a top-filling design to make topping up your juice as simple as possible.

The Cyclone has a dual adjustable airflow system – at the base of the tank and on the wide-bore drip tip – along with a splash-proofing (i.e. anti-“spitback”) feature and a copper-plated 510 connection. The device will also have temperature-control coils coming out in the near future.

There are many excellent devices coming out soon (that will be featured in detail on future roundups), but there are two in particular we thought we’d give a mention:

So that’s it for this month: a great set of new products, especially if you’re into temperature control box mods and sub-ohm tanks! As always, we haven’t covered every new product, but let us know if we missed any big releases and we’ll update the post accordingly!

If you're looking for dry-herb vaporizers, check out our new review of PAX 3 dual-use vaporizer.