An interview with RunnerX (Jim Oliver), the man who ran the entire NYC Marathon while vaping.

Back in July, I wrote about how smoking not only decreases lung capacity and endurance, but also can be a leading cause of anxiety disorders. By switching to vaping, smokers may experience anxiety symptoms through a two-fold process. First, nicotine in e-cigs is absorbed by the brain much slower than that in tobacco smoke. Vapers can still get their fix without the jittery jolt many notice after the first few drags of a conventional cigarette.

Then a few weeks ago I read another post on reddit about a man going by the alias “RunnerX” who was planning on running the entire New York City Marathon while vaping. He wasn't revealing his real name at the time in order to prevent a possible disqualification by marathon officials, being that outgoing mayor Michael Bloomberg is heavily anti-vaping. As a fellow runner and vaper, I thought it was an ingenious idea to promote the health benefits of e-cigs. 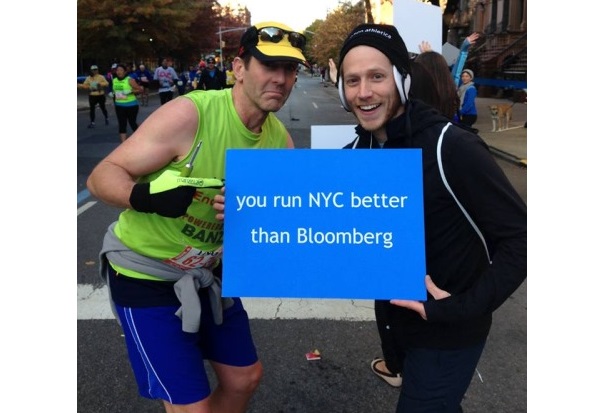 Well, RunnerX succeeded and finished with a time of just over five and a half hours, going through three cartomizers on a Zombie Provari along the way. And now we know his true identity. Jim Oliver is the owner of Steampunk Vapory Lounge in Tacoma Washington. He is also an attorney and partner at Durflinger, Oliver & Associates. I recently interviewed him about the marathon, vaping and running.

For how long were you a smoker and were you an active runner during that period?

I was a casual smoker since about my sophomore year of high school. By casual smoker, I mean I only smoked when I drank. I’ve only really gotten into running over the last five or six years. I played volleyball in college, and I told myself that when I could no longer jump, or have fun playing ball, I’d start running Marathons, and here I am vaping and running marathons at 46.

If you did run events like a 5 or 10k or marathon, how did smoking affect your performance?

What’s interesting about my running is that I’ve never been really training hard like to qualify for Boston, or something like that, so I haven’t been that physically self aware. However, once I started vaping, even with the same running schedule that I always had, I notice deeper lungs and easier breathing.

I ran the Firecracker Quadzilla last 4th of July in Portland, Oregon after having just spent a bit more than a month in Europe. During that month I didn’t really train other than running a Marathon in England. Still, with 30 days of excessive eating and drinking, and no running, but also no cigarettes, I was able to come back and run four marathons in four days, and I went faster every day. I couldn’t have done that as a smoker.

In what other ways did smoking negatively impact your life?

The other health benefit I’ve noticed is that I don’t get sick, or catch colds as frequently now that I vape. I used to catch a pretty bad chest cold at least once a year, typically during the winter. I haven’t been sick since last year. That’s even more amazing when you consider that I flew home from Italy the night before the Quadzilla. I was up for 35 Hours and got four hours sleep before running the first of my four races in four days, and I still didn’t get sick. Again, I don’t think that would have been possible with cigarettes.

What inspired you to vape while running the New York City marathon? Do you think it showed that switching to e-cigarettes can actually improve lung function?

I was on a run one day thinking, which is the best part of the alone-time during my runs, about the bad rap vaping is getting. One of our local elected officials said that “vaping looks like a duck, and walks like a duck” so it must be the same as smoking. That got me wondering how I could highlight that vaping was something altogether different and better. I’d run 30, or so, marathons at that point, and I thought, hell, let’s run a marathon while I vape. The fact that I had just gotten into the New York City Marathon was perfect.

I answered a lot of questions about vaping, and harm reduction and vaping while running, so I think it was a positive experience.

What advice would you give to those looking to get into shape or even start training for endurance events after switching to vaping?

Develop a plan. Start easy with short distances. Don’t be afraid to slow down or take a day off. Don’t take more than a couple days off in a row unless you’re injured. If you’re looking for training info, feel free to drop me a line at jim@durflingeroliver.com; I can definitely point you in the right direction.

Anything else you'd like to add in regards to e-cigs and/or running?

When I ran the New York City Marathon, I vaped Banzai Vapors Let’s Get FizzyKol in a 60% VG blend with 6mg of nicotine. The higher VG level made for a very smooth hit that didn’t cause a buildup of lactic acid the way Propylene Glycol can.

If you’re going to run with your mod, find a tank and device that work for you. I tested every device and juice delivery system I could before I settled on a ProVari with a simple cartomizer. 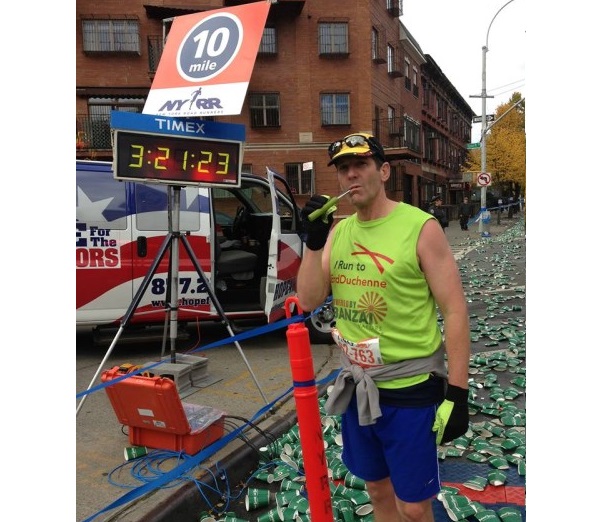 So there you have it folks. Not only did Jim become the first known man to ever run an entire marathon while vaping, but the very next day he was in Washington, D.C. with lobbying Congress for sensible vaping regulations!

How has vaping changed your life? What sort of activities that you avoided while you were still smoking do you enjoy doing now that you've switched to vaping? Let me know in the comments below!