Our Innokin BigBox Atlas review gives you an in-depth look at the unique-looking dual-battery box mod from Innokin. So does the performance live up to the impressive appearance? The BigBox Atlas is a powerful, easy-to-use dual battery mod with an eye-catching, cool design. It’s a little more expensive than some devices on the market, and doesn’t pack itself full of nearly-redundant features, but it does what you need it to in style and performs like a champ. Innokin has been a huge name in the vaping industry since the release of the first iTaste MVP, and they’ve continued putting out excellent devices including the mouth-to-lung Endura series and the updated and improved MVP4. But they’ve continued putting out great devices consistently, and the Big Box Atlas is definitely one of their coolest-looking offerings so far. It’s a dual 18650 mod, putting out up to 200 W and offering TC vaping with all commonly-used materials, so it looks like a solid device for anybody looking for a full-time vaping companion. But is it worth the £69.99 / $92.95 (currently reduced to $69.95) price tag? We’ve put the device to the test in our Innokin BigBox Atlas review to find out. The BigBox Atlas comes in a cool-looking box, with an outer sleeve displaying a picture of the mod and a pull-out section inside containing your mod and the extras. The inside section opens up like a book, and the section on the right contains the device itself. On the left, there’s a box with the USB charging cable and a cool honeycomb-design, wide bore drip tip. You also get a quick start guide so you can get to grips with how to use the device easily. Overall it’s fairly basic in terms of what you get but the drip tip is a really nice touch, and you don’t really need anything else when you’re picking up a mod anyway. The BigBox Atlas looks absolutely awesome. The mod’s shape may be fairly basic and blocky, but from a visual perspective the design is hard to fault. The whole body of the mod has a honeycomb design, but with irregularities throughout that gives it a wavy, unique appearance. It comes in a few color options – green, red and purple – and each has touches of a second color throughout too. My purple version has patches of yellow, almost in a marble effect, that really add to the overall look of the device. The silver fire button also has a really cool design on it, like a sphere made up of tessellated triangles, with the same basic design on the circular section surrounding the 510 connection too. The front panel of the BigBox Atlas is fairly basic, but it’s clearly-presented and gets the job done. The fire button occupies the upper portion of the front edge, and is flat but quite large so it’s easy to absentmindedly find with your thumb. Underneath is a small, rectangular display screen, and below that are the two adjustment buttons, clearly labeled with “+” and “−” so you know which increases and which decreases your setting at a glance.

The display screen on the BigBox Atlas is pretty small, but Innokin has managed to make it work well and you can see all of the key information you need easily. Your main setting is displayed in the center of the screen, with two battery indicators – one for each cell – to the right, and the resistance of your coil and another piece of information displayed on the left. In wattage mode, you can either have the voltage your device is firing at or whether you’re in standard mode or power boost mode, and in temperature control mode it also displays your ramp-up wattage. The battery compartment on the BigBox Atlas is accessed through one of the large faces of the mod, which is held in place with a couple of magnets. This is really easy to open thanks to a small catch at the bottom of the panel, which is easy to get a fingernail into and pry open. They’ve also paid some attention to design on the inside, with a little plaque on the inside of the panel featuring Sebastian Wang’s – the mod’s designer’s – signature and the maximum power, a California flag and “Designer Series” around the battery slots. The slots themselves have gold contact points, and are clearly labeled so you know the correct orientation to insert the batteries. There’s also a little ribbon across the compartment so you can easily pop the batteries out. You couldn’t ask for anything more here, it does everything it needs to and more. The BigBox Atlas has the industry-standard 510 connection, so it’s compatible with pretty much any tank or atomizer you’ll find on the market. The connection is gold-plated so there are no issues at all with conductivity, and it’s spring-loaded too, which helps to account for atomizers with slightly longer or shorter pins. In a nutshell, you won’t have any issues connecting anything up to the BigBox Atlas.

Teaming up with a designer for the mod and paying their usual attention to detail, Innokin has knocked the design out of the park for the BigBox Atlas. It’s absolutely excellent. Variable wattage (VW) vaping is a pretty standard feature on mods these days, but the BigBox Atlas is right up there with some of the most powerful mods on the market, offering up to 200 W of power. This is more than enough for the vast majority of vapers, and even cloud-chasers won’t have cause to complain about what it can do. It adjusts in 0.5 W increments up to 100 W, from which point it switches to 1 W increments. Like on the MVP4, you have to hold down an adjustment button before making changes – which protects against accidental alterations – and if you hold down the button, it scrolls increasingly quickly. You can also use power boost mode if you want a 20% increase in power at the start of your puff, which gives you a harder hit. 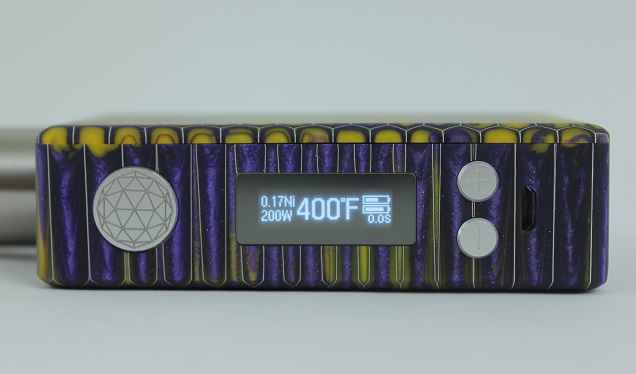 The BigBox Atlas also features temperature control (TC) vaping with all common coil materials: nickel, titanium and stainless steel. The TC runs from 300 to 600 °F or 150 to 315 °C, and you switch from one unit to the other by scrolling past the limit in either unit. The TC mode allows you to adjust your ramp-up wattage by pressing and holding the fire and minus buttons together, which then highlights the wattage display and allows you to make adjustments. There is no adjustable TCR mode, but the freedom to change your ramp-up wattage makes it a great option for anybody interested in TC vaping.

The BigBox Atlas has some additional features too, including the ability to switch the device off with three quick presses of the fire button, and the option to flip the screen by pressing and holding both adjustment buttons together.

Innokin BigBox Atlas Review – In Use

The BigBox Atlas performs excellently in VW mode. Choosing your setting is easy, and the device is responsive and hard-hitting. It works well throughout the whole wattage range, although I rarely venture beyond 60 W in day-to-day use. The power boost function also works really well – it gives the mod a little bit of extra punch towards the start of your draw without becoming overpowering. There’s nothing to complain about here really, it works just as you want it too with no issues to speak of.

The BigBox Atlas works well in TC mode too. The adjustable ramp-up wattage means it gets going however quickly you want it to, and the output remains consistent throughout your draw. You notice a slight drop in output as it switches from heating up to maintaining your set temperature, but the vapor production stays consistent throughout. The temperature stays really close to your chosen setting – in my testing, it deviated by 5 °F at most – and generally the TC mode works just as you’d expect it to. If you want a device with adjustable TCR, then you might not be satisfied with what it can do, but it works well with the standard settings anyway so it isn’t needed for most vapers.

The navigation system on the BigBox Atlas is really well designed. There are no complicated menus or irritating idiosyncrasies to deal with, and once you’ve learned the basics you’ll be right at home. You change modes by holding down the fire and plus buttons together, and keep it held down to continue scrolling through. You have to watch the top left of the display screen to see which specific TC mode you’re in, but when you attach a new coil it prompts you to choose an appropriate mode anyway.

Adjusting settings is similarly simple. The main reason you’ll have to use anything beyond the standard adjustment buttons is if you’re changing the ramp-up wattage in TC mode, and you do this by pressing and holding the fire and minus buttons. You have to hold down one of the adjustment buttons before you change your main setting, but once you get used to this it’s actually a good feature, because you can rest assured you won’t accidentally adjust something when it’s in your pocket.

The mod may look really cool but it is very blocky in terms of shape. This means there are definitely more comfortable devices to hold – pretty much anything with a curved shape or ergonomic design – but you’ll get used to it pretty quickly. Your thumb falls naturally on the fire button and it’s really easy to press down, so it’s about as comfortable as possible for a blocky device when you’re actually vaping.

The portability is also less than ideal, but this is really what you expect from a dual-battery mod: you either get a portable device or one with great battery life, not both. The biggest benefit of the BigBox Atlas when it comes to portability is how lightweight it is. It’s made from a resin, and is much, much lighter than most dual-battery box mods on the market. As I write this review, I have the BigBox Atlas and the Fuchai 213 Plus from Sigelei sat beside me, and the BigBox Atlas with batteries inserted feels roughly the same weight the Fuchai with no batteries. It is bigger than single-battery mods, of course, but overall for a dual-battery mod it isn’t bad at all. The BigBox Atlas is really well put together, on the whole. The device is sturdy without being too heavy, the threading fits your tanks snugly and all of the buttons are easy to push, with a satisfying click as you do. The only complaint is the magnets on the battery panel, which both came loose through my testing. The battery panel still stays in place, but really you’d have to glue them back in place and this isn’t ideal. Other than that, though, there is nothing to complain about.

The BigBox Atlas is a great dual-battery mod. The design is really the biggest selling-point, because it looks incredibly cool, but it does plenty in terms of functionality too, performing well in both VW and TC modes. The device doesn’t have as many extra features as some devices, but realistically it offers everything you need as a vaper, unless something like adjustable TCR is really important to you. The price of £69.99 (in the UK) or $69.95 (for US down from  $92.95 for a limited time) is a bit higher than some devices, but if you’re in the market for something that looks awesome as well as performing like a champ, it’s definitely worth the extra cash.