Our Hexa review takes a look at the stylish, beginner-focused pod-style device. Is it up there with the best pod systems on the market, or can you do better? The Hexa is a very high quality pod-style device, really easy to use and outperforming most devices in the class. While the battery won’t quite get you through a full day and not every flavor is a knockout, it’s a solid device and a bargain at the introductory price. The Juul put down the basic blueprint for pod systems as we know them today, combining then-unique nicotine salt based e-liquid with a lower-power, simpler device that managed to be satisfying without needing to be the size of an 80s cell phone. Now pod systems are everywhere, and the basic formula has been expanded and improved upon, making it one of the best times to be a new vaper. The Hexa follows proudly in this tradition, maintaining the shape and functionality of a typical pod system, but using hybrid (salt and non-salt) e-liquid and boasting a battery that will last you a whole day.

It all sounds great on paper, but what’s the Hexa like to vape with in practice? How does it fare in comparison to the multitude of pod devices you can pick up these days? Our Hexa review tests out the device to find out. 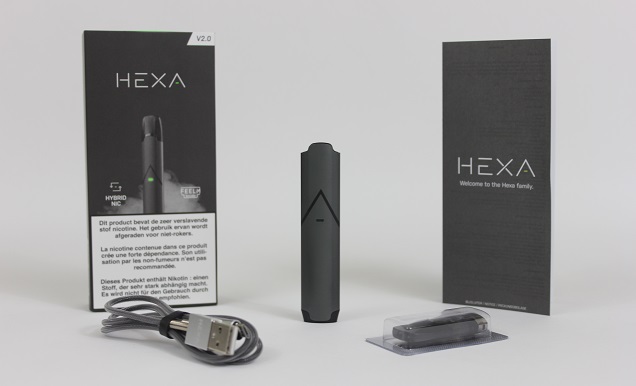 The Hexa kit comes in a well-presented box, with an outer sleeve and a main section that opens up like a book to reveal your battery, the USB charging cable and a foil-packed tobacco pod to get you started, in addition to a basic fold-out instruction manual. This is all you need to start vaping right out of the box, so no complaints here at all! 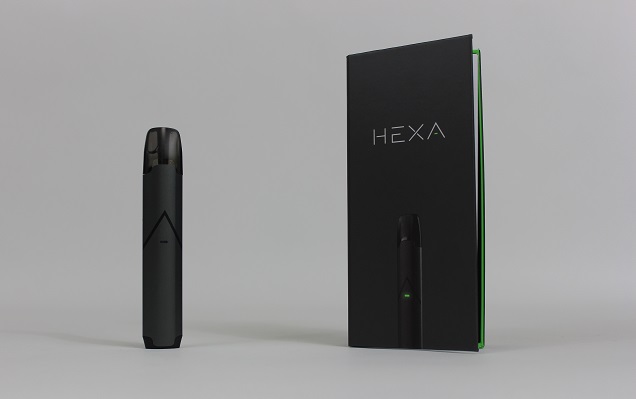 The Hexa looks a little like a Juul, a pen-like device except with a roughly rectangular cross-section and a dark grey colored body. It’s only a rough similarity, though, because the body of the Hexa bulges out towards the middle, unlike the strict rectangular shape of the Juul, and it has an arrow-shaped black stripe about half way up, with the horizontal LED light in the middle almost forming an “A.” The pod slots into a hollowed out top section, with the black mouthpiece visible at the top of the device. Overall it definitely takes some cues from the Juul, but it works really well and gives the Hexa a cool-but-understated appearances. The pods themselves have a pretty standard design, but they get the job done well with some useful extra touches. The bottom half has the same shape as the battery section, with a metallic base and two gold-plated contact points that match up to the connectors on the inside of the battery. They’re magnetic, so you don’t even really have to push it down after you get the bottom into the space at the top of the battery section. The front of the pods has the Hexa logo, the name of the flavor and nicotine strength printed on the front, which is really handy if you have a few pods open a once.

The mouthpiece section tapers in a little bit at the top, making it a comfortable fit for your lips, with a hole in the top for you to draw vapor in through. The pods hold 1.7 ml of e-juice, and you can see the coil housing towards the bottom if you look inside. They can’t be refilled and you can’t change the coil, so when they’re done you just throw them away and insert a new pod.

Overall the pods are nicely designed – they aren’t really innovative but get the job done well. The Hexa has a green LED light on the front of the body, which lights up during charging and when you take a puff from the device. It also blinks multiple times when the battery needs to be charged. Finally, there’s a micro-USB port on the bottom, so it doesn’t interfere with the overall look of the device and it’s easy to plug in to. The port is completely recessed, too, so the device can easily be stood up when it isn’t charging.

The Hexa doesn’t really take many chances when it comes to design, but it has a simple-but-effective design and layout, so while it might not turn heads it works really well from a practical perspective.

Hexa Review – In Use Vapor production is one of those characteristics that really matters to some vapers, and is a large part of the push to find bigger and higher-power devices, but isn’t as important as many would assume. As long as the device puts out enough vapor to replicate the sensation of smoking, you don’t really need much else. The Hexa does really well, keeping this in mind. It isn’t a device for huge clouds, because it isn’t meant to be, but you get a satisfying amount of vapor with each puff that’s easily in line with cigarettes or most vape pens on the market. Even as a long-term vaper I’m more than happy with what it can do in this regard, but it should go without saying that it’s not one to take along to a cloud competition.

As is common for pod devices, the Hexa works automatically, so all you have to do is inhale from the tip to activate the coil and start vaping. The system on the Hexa works perfectly, with the device responding every single time I tried to take a puff during testing. Other high-quality pod devices like the Starss Icon haven’t been as good in this department, so it’s great news that unresponsiveness doesn’t seem to be an issue here at all. As on many automatic devices, it helps to take a couple of priming puffs to get the coil up to temperature before your main draw, but provided you do that, the Hexa performs excellently. Overall, the flavor you get from the Hexa is great, but given that the pods come pre-filled, the best way to talk about the flavor is with a quick run-down of the options. So here’s a quick look at the six pod flavors currently on offer with the Hexa (more will be released in future, according to the site):

On the whole, it’s a solid selection with something for everybody. The tobacco is the least enjoyable of the bunch, but even that isn’t bad, it’s more that it could be better.

The Hexa is a little unusual in that it uses hybrid nicotine, a mixture of salts and standard “freebase” nicotine. This unique combination is worth a little consideration, because salts are generally used to make stronger nicotine liquids less harsh on your throat. The blend between the two does quite well for the Hexa. You still get a solid punch on the inhale thanks to the generally-harsher freebase nicotine, but the salts take the edge off and make the 20 mg/ml pods still easy enough to vape. The throat hit is definitely punchier than salt-only pod devices, and potentially one of the best options on the market for smokers looking for a cigarette-like throat hit.

The Battery and Charging

The Hexa’s 350 mAh battery might not seem like a lot in comparison with vape pens or especially the mods on the market, but since the Hexa runs at a low power, it’s actually a big selling-point for the device. The battery life is better than many of the pod systems currently available, and the marketing spiel for the Hexa claims that it’s good for a whole day of vaping. Based on my testing, this isn’t far off being true, but it doesn’t quite live up to this. The strong nicotine levels of the pods means that you don’t have to vape too often to get enough nicotine, and the device got me through a day of work before needing to be recharged. Perhaps not quite a morning-to-night device, but still a great offering for something so compact. I was getting through around half a pod per charge.

When the battery is at the end of its charge, the LED light flashes multiple times so you know it’s time to recharge. If the indicator supported multiple colors – green, amber and red instead of just green, say – you could have had a bit of pre-warning before needing to charge, but overall this isn’t a huge deal. Charging is quick, too, taking around an hour to go from empty to fully-charged, and the LED switching off when it completes. This is great: even if it’s your only device, you don’t need to go too long without something to vape.

And – admittedly less importantly – the USB cable included with the Hexa is really high-quality. They obviously put a little bit of extra care into the design, with a textured, cord-like cable and metallic covers around the base of both ends. It’s also long enough that you can easily take a cheeky puff during charging. It’s supposedly magnetic as well, but honestly I couldn’t really tell the difference. The Hexa is so simple to use I don’t even think the manual would be needed even if you’re brand new to vaping. You pop the pod you want to vape in the top of the device and take a puff to vape. That’s it. When the pod is finished, you pull it out and throw it away. Other than that, the only thing you need to do is charge the device, which just means plugging in the USB cable. It really couldn’t be any simpler if it tried.

The small size of the Hexa and its basic, pen-like shape means it does really well in terms of both comfort while you’re using it and portability when you’re out and about with the device. It’s light as well as small, so although it helps to support it with your hand, you can pretty much hold it between your lips while vaping if you like. In terms of portability it’s hard to beat, it’s so small you can easily slip it into your pocket without issues, and generally speaking it’s better than most devices on this front.

Does the Hexa Leak?

Throughout testing, leaking has not been an issue at all with the Hexa. The pods are completely closed off, so it isn’t hugely surprising that leaking isn’t a massive issue, but I haven’t even experienced juice getting sucked up the mouthpiece or any major condensation issues. I’ve noticed a tiny bit of build-up around the base of the pod but this is easy to wipe up and definitely nothing major. Overall it effectively removes a pretty common issue with all types of vaping device. 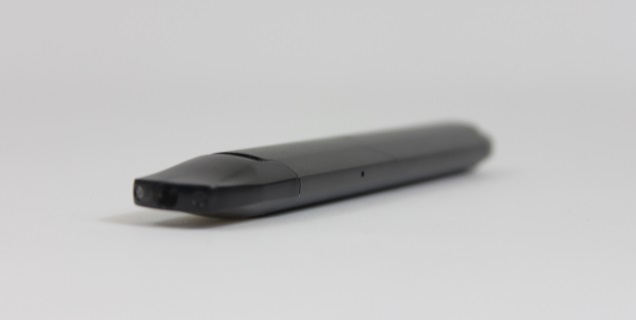 The Hexa is really well put together. The magnetic connection for the pods is a perfect example of this: the pods fit snugly into the slot, but everything is so much easier to sort out thanks to the magnetized ends, they keep it in place but not so much that it’s difficult to remove when you need to. The responsiveness of the automatic activation system is another example of how well they’ve done when it comes to the build quality – you almost expect a little bit of glitchy behavior from automatic devices, but the Hexa works perfectly every time.

The Hexa is currently available for £9.99 / $12.70, which is roughly half the recommend price as an introductory offer, but in any case it’s a fantastic deal for anybody new to vaping or just looking for a more subtle device to use from time to time. The flavors are great, the battery lasts impressively long for a pod system, and it’s really well-designed and user-friendly. You won’t put out tons of vapor and you won’t exactly turn heads with it, but it offers a very satisfying vape in a beginner-friendly package. It’s well worth considering if you’re in the market for a pod vape.