Our Grenco Science G Pen review takes a look at the entry-level concentrate vaporizer from the well-known brand: it’s good, but is it $50 good? There are definitely concentrate vaporizers that can do more than the G Pen, but for the $49.95 price-tag, you get a dependable and easy-to-use device that gets the job done in style. Experienced vapers might want something more feature-packed, but it’s great for beginners. While it’s a challenge to find vape pens that work with dry herb, there are plenty of great vape pens for people looking to vape waxes and concentrates. Grenco Science has plenty of excellent devices on the market, but their most well-known is the G Pen concentrate vaporizer. Looking like a standard vape pen but coming with a dual quartz coil and the ability to vape any concentrates, the G Pen is an impressive-looking device with a reasonable price-tag of $49.99. But is it really all it’s cracked up to be? Can it compete with devices like the Pro Series 3X from V2 Cigs? Our Grenco Science G Pen review aims to find out. The G Pen comes in a stylish-looking black box that’s absolutely packed full of goodies. The box has a magnetic clasp and opens up like a chest, revealing your pen and a long, two-ended tool for adding your concentrate in a plastic upper layer. Below this, you get a USB charger and wall adapter, three Q-tips for cleaning the device and two little glass pots for storing your concentrate. This is a really good set of gear, from the high-quality tool to the handy – and cute – little pots. It’s an excellent kit, overall.

The G Pen has a pretty straightforward appearance. It looks just like a standard vape pen, with a black body, broken only by a silver band across the middle which has the circular fire button, and a thinner plastic mouthpiece section at the top. It has the “G” logo on the front side right at the bottom, and nothing else on the body to take away from the sleek, minimalist appearance. It has a coating that’s soft to the touch too, so it feels really nice to hold. The atomizer section has four air-holes just below the mouthpiece, and the atomizer section is slightly smaller in diameter than the rest of the pen. Overall, the G Pen looks really cool: a nice mix of stylishness and discretion. The atomizer section on the G Pen is where most of the action happens on the pen, and it’s really well designed. You can unscrew the whole thing above the silver band where the fire button is, and you open it up by unscrewing just below the mouthpiece, where there is another silver band. It unscrews really easily too, so it’s really user-friendly. Inside, you can see the two quartz rods with the coils surrounding them, and the thin cylindrical chamber gives you plenty of space to add your concentrate. The inside is coated with borosilcate glass to provide heat protection, and the air-holes sit a short way above the coils. It’s really well-designed, and Grenco Science has clearly paid attention to detail when putting it together. 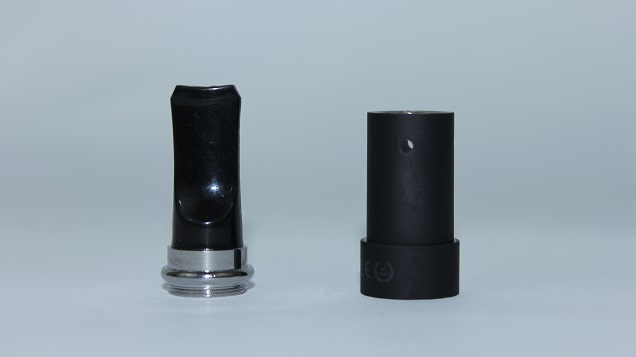 The mouthpiece for the G Pen has a thin stem so it’s comfortable to hold between your lips, and it’s made from a glossy black plastic so it matches the rest of the device well. There is a metallic mesh section on the underside of the mouthpiece to catch any debris that comes up when you inhale, and behind it there are a couple of concentric circles of holes for the vapor to pass up through. Again, you can really tell how much attention to detail Grenco Science has paid when putting it together. The tool you get with the G Pen is really well-designed too. It has one flattened end for scooping up and applying your concentrate to the coils, and the other end has a poker so you can have a bit of fine control over the positioning of your concentrate. The middle section has two knurled sections – one below each tool end – so you can easily grip the tool when you’re making adjustments or adding your concentrate. In the middle, there’s the G logo and the URL for Grenco Science’s site. This is a really great tool, and more than enough to support you during your concentrate vaping.

The G Pen also has blue LED lights around the fire button and at the base. These illuminate when you switch the device on or off, and when you fire the pen. This is good because it gives you visual feedback when you do something on the device.

The G Pen is really well designed. It’s simple, but looks really cool and everything is super user-friendly. Grenco Science has done a fantastic job here. When you first use the G Pen, you’ll have to learn to add concentrate and get vaping. The good news is that this is a really straightforward process that you’re unlikely to go wrong with. The mouthpiece unscrews to open up the main chamber, and if you look inside you’ll see the coils wrapped around the quartz rods. Get the G Tool and use it to scoop up a bit of your concentrate. Apply this directly to the coils – gently, you don’t want to disturb the coils as you do it – and then you’re pretty much good to go. I’ve been using a thicker, crumble-like wax, so after applying a chunk of it I hit the fire button and let it all melt into a thinner oil.

This is all you need to do to use the G Pen in most cases: when your wax has run out, apply more in the same way and keep vaping. It should go without saying that touching the coils while firing or even having contact with them when they’re still hot isn’t a great idea and you should let everything cool before you go messing around.

The G Pen is the size of a standard vape pen, and although the specs don’t appear to be published online (or in the manual), it’s likely around 650 mAh based on the size. For an e-liquid pen, this would be OK but a little lacking, but for a concentrates device this is more than enough to keep you going. You can keep vaping for a long time on a single charge, easily enough for two to three days of vaping concentrates, depending on how much you use it. For ongoing use with something like CBD, you’ll get a day or two of vaping out of a single charge. The LED at the bottom of the pen blinks three times when it’s time to charge.

Charging is really quick too. It takes about two hours to go from completely flat to charged, so you don’t have to go too long without anything to vape between charges.

The G Pen performs really well thanks to the dual quartz coils. When you’ve loaded up your material, you simply hit the fire button to get vaping, and it starts producing vapor immediately. Flavor-wise, you get a strong hit of the taste of your concentrate right away, and the quartz wicks ensure that nothing interferes with the flavor. The mesh on the underside of the mouthpiece prevents any solid material from getting pulled into your mouth along with it, too, all without noticeably impeding the airflow.

The vapor production is good too. There isn’t a ridiculous amount – since cloud-chasing isn’t the goal – but it’s more than enough to keep the experience satisfying for anybody used to smoking their marijuana. As you’d expect, it’s better when you’ve just added concentrate and generally decreases a little as you work through it and as the battery drains. However, you’ll get a bit of visible vapor with each puff even in the worst case scenario. If you’re looking for a thicker cloud of vapor, you’ll have to spend a bit more on a higher-end device, but for a basic concentrate vape pen, there’s nothing to complain about here.

The G Pen comes with three unique Q-tip type tools for cleaning the device. These are pretty cool – one side has a blue line across it, and if you snap the tip there, it releases a cleaning solution into the cotton at the opposite end. You then use this to clean the chamber and the mouthpiece. You have to be careful around the coils – and don’t try to clean inside of the coil – but generally speaking it’s really easy to do. If you’ve used a Q-tip before you’ll have no issues at all.

How Often Do You Need New Coils?

The dual quartz coils in the G Pen are pretty good when it comes to longevity, but they do need to be replaced every so often. The precise time-frame does depend on how much you vape and how you vape, but generally you can use one for about two months before it will need to be replaced. The lower end is after six weeks, but if you don’t use the device as much you could easily get over two months out of the dual coils. The G Pen is really well put together. It’s a simple device, admittedly, but everything works as it should and the attention to detail is impressive. The main thing you depend on the manufacturing quality for is the threading, with the mouthpiece in particular being regularly screwed in and unscrewed. All of the threading offers a tight fit but screws and unscrews easily and smoothly. Everything is also sturdy, from the beefier battery section right to the daintier mouthpiece. Overall, Grenco Science has done a great job here.

Overall, the G Pen is a great device if you’re looking for a simple vape pen that can handle concentrates. You get plenty in the kit for your $49.95 investment, as well as a dependable vape pen that performs like a champ and is really easy to get to grips with. There are fancier, more feature-packed devices out there, but if you’re looking for something affordable that works well, you can’t do much better than the G Pen. It’s definitely worth picking up if concentrates are your thing and you don’t need a device that can also handle dry herb.