Our GeekVape Avocado 24 review puts the new genesis-style atomizer through it’s paces: does the Velocity-style build deck make this one of the best old-style RTAs on the market? The GeekVape Avocado 24 is a great genesis-style RTA, with an intuitive, spacious Velocity-style build deck, high-quality materials used throughout and a sizable 5 ml tank. The flavor and vapor production are excellent, and for $33.99 it’s a great deal for anybody in the market for a solidly-performing RTA. Genesis-style atomizers were the only rebuildable tank atomizers (RTAs) for quite some time. At the time, vapers largely used stainless steel mesh as a wick material, which was something of a nightmare to work with, even if the performance was pretty solid once you got it set up right. Thankfully, though, times have changed. The RTAs of today are almost all like little dripping atomizer decks surrounded by a tank and fed using small juice channels in the base of the deck. But could genesis-like devices still have something to offer?

The Avocado 24 from GeekVape aims to bring back Genesis-style devices, with a Velocity-like two-post build deck and a squat little tank underneath it, boasting a 5 ml juice capacity and easy building and refilling. But is it all it’s cracked up to be? Is it worth $33.99 for the atomizer? Our GeekVape Avocado 24 review finds out.

This device was provided for the purposes of this review by Heaven Gifts. Regardless, what follows is a completely honest appraisal of the RTA. The GeekVape Avocado 24 RTA comes in a plastic box with a single layer of foam holding the atomizer and all of your goodies: you also get a handy T-shaped tool that has two sizes of hex key and a Phillips-head screwdriver, a 510 drip tip, O-rings, spare screws, an adapter for 510 drip tips, a spare cover for one half of the atomizer and a spare glass section for the bottom of the tank. This is a fantastic set of offerings, going above and beyond what you’d expect, particularly the handy little T-shaped screwdriver. The GeekVape Avocado 24 tank atomizer has a straightforward yet visually-appealing design. The basic structure of the atomizer is that of a genesis-style atomizer, with a tank at the bottom and a build deck above. The whole device is quite fat and short, with a 24 mm diameter and a 43 mm height with the drip tip included. The larger diameter means it doesn’t sit flush to some mods, but with most box mods this isn’t such an issue.

In terms of appearance, the device has a pleasingly minimalist appearance, with the silver body being bare aside from “Avocado” engraved on one side of the device in a script-like font. The frosted glass tank that comes installed with the atomizer also adds to the visual appeal, but you can change it out for the included clear option if you prefer. The top of the tank is split into two sections, which don’t come apart but are used to control the adjustable airflow system on the Avocado atomizer, with the upper section rotating freely to reveal either a slot for large airflow or one of two holes for a more closed-off airflow. This works really well, and each selection matches up with an equivalent one on the other side so both of your coils get equal airflow on dual coil builds. One of the two holes doesn’t have a companion on the opposite side though, which is perfect for anyone wanting a single-coil build with tight airflow.

Under the deck, there are two rectangular posts with two side-mounted hex screws in each, which can be unscrewed to reveal sizable post holes. Four holes in the deck are used for your wicks, and the ceramic cover for half of the atomizer (called the “baffle board” by GeekVape) has two plugs in the bottom so you can close off two of them. On one side of the deck, a metallic cover swings out to reveal two holes for refilling. Overall, the deck is really simple, which is a great thing regardless of how long you’ve been vaping. The Velocity-style build deck on the GeekVape Avocado RTA makes rebuilding a very forgiving process, and it’s very much intuitive if you’ve had any experience with rebuilding before. You put your coils (or coil) together – with the large post-holes meaning any wire type is supported – and connect one end to each of the two posts. The positioning of the posts means that your coils naturally sit in the optimal position, right between the two holes in the deck. The posts make it about as easy as it can be to set up dual coils, too. 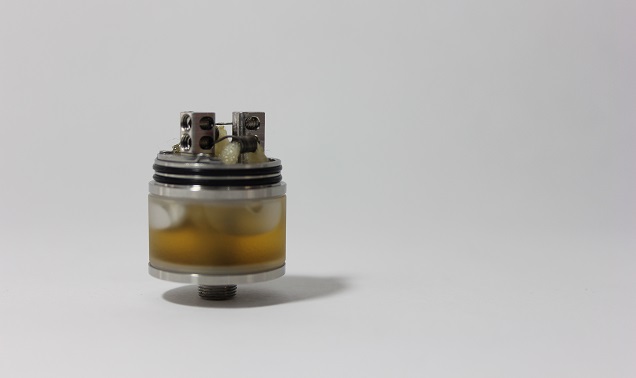 While other RTAs can feel a little cramped on the building deck, the Avocado 24 has a very spacious deck. The slightly larger-than-usual diameter is another factor in this, but overall the biggest benefit comes from having the deck comfortably sitting atop the tank rather than being confined by it.

GeekVape Avocado 24 In Use The GeekVape Avocado 24 rebuildable tank atomizer has a solid design, makes rebuilding about as easy as it gets and offers a nice selection of airflow options, so it’s almost a foregone conclusion that it’ll be excellent in use. And this assumption very much turns out to be true. The Avocado atomizer offers fantastic vapor production in both single and dual-coil setups, and the flavor is also consistently amazing.

Refilling the device is very simple thanks to the dedicated wicking holes under the metallic swing-door. This has plenty of space for either glass dripper spouts or plastic ones, so you won’t have any issues regardless of what type of juice bottle you’re using.

The biggest benefit of the genesis-style layout of the Avocado 24 tank is the ability to easily access your coils with a full tank: you just remove the top cap and you’re ready to make any changes you need. This is particularly great when you’re first getting used to the device, because it makes it really easy to try out different wick configurations and experiment with different builds.

Leaking is a somewhat obvious issue with the Avocado. It has all the problems with leaking you expect from RDAs, but with the additional issue of having a tank full of ready-to-leak juice below the deck at all times. If you’re carrying it around with you, you can close off the airflow slots to minimize the impact of this, but you’ll still get some leaking.

The airflow control system both offers plenty of options for the type of draw you get. For dual coil builds and anybody looking for an airier draw, the slots are perfect, and you can also partially cover them to tweak it to your liking too. For single-coil builds, the baffle board is used to cover half of the tank, but it has a hole through the center so you can get airflow on both sides of your coil. But if you want a tight, mouth to lung friendly draw, you can completely close off the airflow on the unused side.

The downsides of Genesis-style devices do carry over to the Avocado 24 a little, but it isn’t really too bad. For example, the tank needs some tilting to ensure your wicks are soaked when you’re low on juice. Similarly, if your wicks are too dense or too long it can impact the flavor you get and lead to occasional dry hits.

On the whole, though, the GeekVape Avocado RTA 24 is a pleasure to vape with in use. The vapor production and flavor are astounding, it’s easy to rebuild and adjust your builds and refilling is really straightforward thanks to the dedicated filling holes. Although the Avocado 24 is a Chinese-made device, the build quality seems exceptional. The device uses high-quality materials – such as Pyrex glass for the tank, a gold-plated contact pin at the bottom and PEEK insulators – and everything is well put together.

GeekVape has produced an excellent genesis-style atomizer, with a spacious build deck with a user-friendly layout, a nice big tank and great performance all-round. If you can cope with a less-than-perfect fit on some devices due to the 24 mm diameter and experimenting a little to get the best wick setup for your tastes, there is very little to complain about with the device. For a price of $33.99, if you’re in the market for an RTA it’s well worth considering – it has the potential to put genesis-style devices back on the vaping map.