We take a look at the Eleaf iStick 40W TC – is it the best temperature control mod for vapers on a budget? The iStick 40 W is a very affordable mod, and outside of TC mode, the performance is excellent. The TC isn’t perfect, but the in-built battery will last you through most of the day and the mod has a comfortable and compact design. A great option for newer vapers.

The iStick series are a set of well-loved devices. They’re affordable, widely-available, and they pack a lot of power into compact packages. The 40 W version not only offers a substantial amount of power, it also adds temperature control, making it a very appealing option for vapers or smokers looking to get into vape mods.

However, the advice “you get what you pay for” is always in the back of your mind when you’re considering picking up something affordable, and the iStick 40 W is just $34.95 – does the low price mean the mod suffers? Is it worth spending a little more to get something that performs better?

Our iStick 40W TC review takes a look at what it has to offer. The 40 W iStick comes in a fairly bare but well-presented box: you get the mod, a USB charging cable and an eGo adapter, along with a brief instruction manual, all inside a standard-style cardboard box. Your mod sits on the upper layer in a foam block (with the GS Tank if it’s included in your kit), and everything else is individually packaged in the bottom half of the box. You get everything you need, and the eGo adapter is a nice extra touch for anybody hoping to use a basic clearomizer. 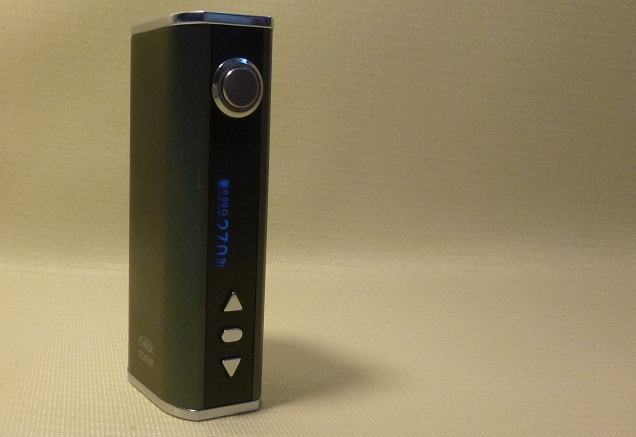 The OLED screen occupies the flattened edge, with the circular fire button and adjustment buttons on either side of it. The top and bottom edges have a metallic color, and the body comes in black, blue, silver or grey. The only branding is “iStick TC40W” written on one of the large faces and the Eleaf logo on the other, both at the bottom and in fairly unassuming text, so the look of the device is generally excellent.

The bottom and top edges have the micro-USB port and the 510 connection, respectively. There’s also a spot on the top edge for attaching a lanyard, and although I haven’t tried this out, the addition will be undoubtedly appreciated by anybody who likes carrying their mod around their neck or having the extra security of it being attached to a belt loop as well as nestled in your pocket. The 510 connection is stainless steel and spring loaded, surrounded by little air-flow channels and seeming pretty well-constructed, overall. The eGo adapter is well made, too, and it doesn’t spoil the look of the device at all.

The screen may not be as clear and well-presented as many modern devices, but the layout of the OLED gets all of the core information across to you at a glance, including a battery icon to give you a rough idea of your remaining charge.

The best thing about the iStick 40 W’s design is the ergonomic element, offering a mod that genuinely fits comfortably into your hand and is almost unbeatably portable, considering its feature-set. There’s not much to complain about in this department, overall.

The 40 W iStick has a couple of main features – the temperature control and the variable wattage – along with resistance checking (to two decimal places), plenty of safety features, the ability to vape while it’s charging and a few little extras.

The variable wattage runs from 1 to 40 W, with adjustment in 0.1 W increments and the ability to scroll quickly when you hold down either the up or down button. You change between modes by holding the “menu” button (the oval-shaped one between the adjustment arrows) for a few seconds.

The temperature control runs from 200 to 600 °F or 100 to 315 °C, and if you go over the maximum or under the minimum it switches between the two. Although it only appears to support nickel, you can add a titanium option by switching the device off and holding down the “fire” and “up” buttons for 25 seconds.

It supports resistances of as low as 0.15 ohms in wattage mode and 0.05 ohms in temperature control mode, making it well-suited to rebuildables or sub-ohm tanks. You’re unlikely to need to step outside of this range, so there are no complaints here at all.

There is also a “stealth” mode, where the screen doesn’t light up when you press fire (or do anything), which you activate or deactivate by holding the fire and down buttons while the device is on. You can also lock the adjustment buttons by holding them both down for five seconds, so you can’t accidentally change your settings. Finally, you can rotate the screen by holding down the adjustment buttons like this when the device is off, to make it easy to customize to suit how you hold the mod.

It’s an excellent range of features, overall. It does everything you need it to (and more), and has plenty of capability for most vapers’ needs. It could have benefited from a simple menu system for the extra features (as things stand it’s a little like remembering cheat codes on old video games), but everything is still easy enough to find your way around. So how does the iStick 40 W TC work in use? Does it have what it takes to stand up to the day-to-day needs of a vaper?

The majority of what you’ll do with the iStick on a day-to-day basis is very straightforward: using the up and down buttons to adjust your settings and holding down the menu button to switch between temperature control and wattage mode. With no menus to contend with and intuitive operation, everything runs very smoothly for the basic functions: it’s easily simple enough for a new vaper wanting great performance without a lot of messing around with settings.

The size and design of the iStick 40 W make it a great option for vapers who’ll spend a lot time out of the house, too. While most box mods do quite a good job in this area, the iStick is the perfect size for slipping into a pocket, and since it can be locked or switched off easily, there’s not risk of accidental activation.

It’s also very comfortable to hold, nestling into the palm of your hand and with the fire button being easy to press either with your thumb or your index finger. The circular fire button responds well, having enough resistance to stop you from pressing it accidentally but it not taking much force to activate when you mean to.

When it comes to performance, the iStick 40 W TC is hard to fault. In wattage mode, the device works like a dream, ramping up efficiently and producing impressive plumes of vapor within seconds. Adjustments are made in 0.1 W increments, but if you hold the button down it scrolls through progressively quicker and quicker so you can make big changes fairly quickly. The 40 W maximum might be a little low for the hardened cloud-chasers, but for most vapers – like myself – this is plenty of power to work with. I rarely exceed 30 W, but it works just as well at full power.

Temperature control mode works well enough, with some caveats. You switch into TC mode and your chosen temperature setting is displayed on-screen, and you can lock the room temperature resistance (to ensure consistent performance) by holding down the “fire” and “up” buttons for two seconds. A small padlock icon is displayed next to the resistance to confirm that it’s locked. Some vapers have reported fluctuations in readings when it’s locked, though.

When you hit the fire button it displays the current temperature, which rises quickly before reaching the cutoff point and displaying “Temp Protection.” The device responds to the subsequent dip in temperature impressively quickly, offering a more or less constant stream of power. You notice the drop-off, but it tops itself back up quite quickly, so your draw doesn’t feel overly stinted when you’re hovering around the limit.

However, the accuracy of the TC is definitely off when you compare it to other devices. It’s a really underpowered, so you’ll probably have to set it a lot higher than you usually would to get the performance you’re looking for. At under 500 °F, the vapor production becomes quite weak. This isn’t a huge deal in practice – you just adjust it upwards until you hit the sweet spot – but it’s still a big issue for the device overall. You’ll probably need to do a lot more adjustment of the temperature than with other devices.

When you change atomizer, the iStick 40 W automatically reads the resistance and updates the display, although sometimes it needs you to hold its hand and confirm that you’ve switched to a new coil by pressing up. This is about as user-friendly as it gets – you don’t really need to worry about the resistance as long as it’s over the minimum, you just choose your setting and you’re good to go.

The battery life is also substantial, especially for such a small mod. It has a 2600 mAh battery, which is enough to keep most vapers going through most of the day – or at least while you’re out at work. It comes with a USB charger, which connects up to the micro-USB port on the bottom of the device. It takes about three and a half hours to charge up from empty, and you can vape while you charge. This would be a little easier if the charging port was on the side of the mod, though, because with the cable attached you can’t stand the device up. Still, with a tank connected it makes little difference whether it’s stood up or laid down. 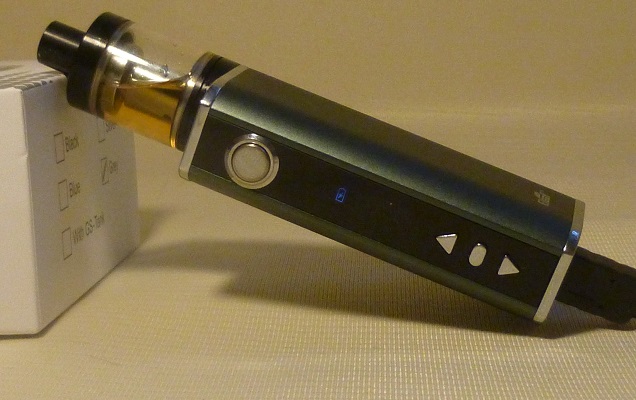 The in-built battery and vape-while-charging functionality really complete the package, making the iStick 40 W a solid option for vapers taking their first tentative steps into the world of mods. All you need to do is pick up the device – with a tank included, ideally – and some e-liquid and you have everything you need to start vaping. There’s no need to mess around with batteries or get a separate charger. You don’t even need a spare device to keep vaping all the time.

So the iStick 40 W TC is a great device in day-to-day use, despite some issues in TC mode, and even with my ever-growing collection of box mods, it still finds its way into my regular rotation.

iSticks have a pretty shoddy reputation when it comes to manufacturing quality. Tons of vapers run into issues with various versions of the iStick, from auto-firing to explosions. The 50 W version, in particular, has a very bad reputation. That said, problems with the 40 W version don’t appear to be as common (although they do exist), and I didn’t have any issues through my testing. Everything is solidly put together, and although the finish has picked up a few scratches, it’s a good offering considering the price.

If you're looking to find similar top performing devices, check out this list of the best rated e-cig mods or best vape pens we put together based on suggestions from the community.

The adage that “you get what you pay for” is does have some truth to it, but the iStick 40 W shows that this doesn’t mean you can’t get a solid mod for an excellent price. If you’re looking for a great TC vape, you could undoubtedly do better elsewhere, but once you get it set up right for your atomizer, it’s definitely passable. Other than that, the mod is really great: it puts out plenty of power for non-cloud chasers and it’s easy enough to use for new vapers. With the in-built 2600 mAh battery and the very reasonable price tag, it’s still well worth considering, especially as a first mod or just something to use when you’re on-the-go.