Do We Really Need Stats on Our Vaping Habits? 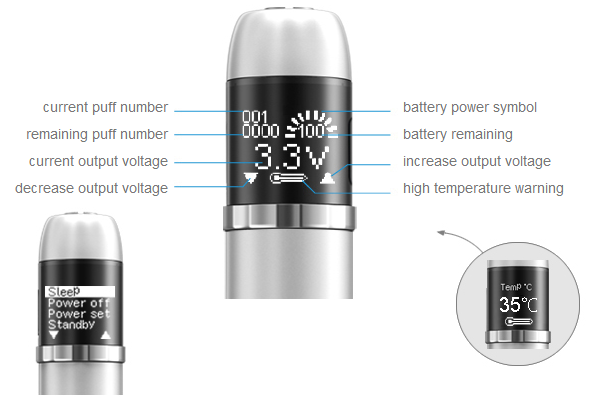 As e-cigarettes evolve at a startling pace, there’s an understandable pressure on manufacturers to innovate in order to stand out in the crowded marketplace. This general climate of inventiveness and creativity has led to the proliferation of different devices, but when a company is low on ideas for worthwhile improvements it also leads to completely useless additions, like blu eCigs’ ill-fated “Social Feature.”

A more recent trend is an extension of the puff-counter idea, providing a detailed run-down of your vaping habits, complete with puffs-per day, voltages and resistances used at different times. Devices like the Joyetech eVic have the capability to connect to your computer and provide a plethora of information of this type (through the My Vapor Record, or more recently, the myVapors software), but do we really need this sort of thing? Is it a useful tool for cutting down your consumption, or a half-baked idea cooked up by marketing executives with no bearing whatsoever on real-world vaping?

What Vaping Data do You Get?

Joyetech’s effort is the most well-known foray into the world of vaping-habits data, and the basic information you can find is the puff-count, usage time and energy consumption plotted against time, voltage, wattage or resistance.

This data can all be displayed by day, week or month, and averages are displayed accordingly. The result of this is that you can check out, say, your puff-counts per day over the past week, or your recent weekly puff counts or even your puffs per month over the previous year and a half. You can also see how much you vape on each wattage, voltage or resistance on a specific day, week or month.

Other “smart e-cig” options like Smokio are quite similar, but in this specific instance the data is limited to puff-counts over time, some information about health benefits (based on how much you’ve cut down smoking) and a counter for your total savings accessed through a smartphone app. This is relatively similar, but lacks the somewhat obsessive level of detail you’ll find in Joyetech’s programs. 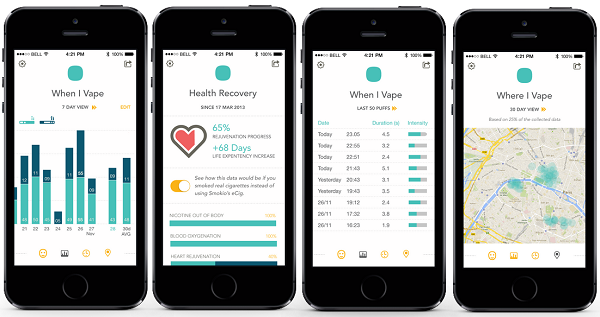 It goes without saying that there is some potential for use for technology of this type. If you were looking for data to see how successful you are in your attempts to substitute smoking with vaping, the puff-counts would clearly provide some indication. You might notice that you’re vaping a lot more frequently since you switched to a new juice, for example, or that you seem to enjoy vaping more on a higher power, and can adjust your habits accordingly to maximize your desire to vape and hopefully quit smoking.

Similarly, the data would have the same uses if you wanted to reduce your nicotine consumption. For example, if you’ve switched to a 12 mg liquid from an 18 mg one on a specific day, you can check out the data to see if the reduction in nicotine level by a third has impacted on the number of puffs you take, and thereby whether it’s working. If you find that this decrease in nicotine level is accompanied by a proportional increase in puff-count, you’ll know that you’ll have to make a conscious effort to take fewer puffs to decrease your nicotine intake.

But is it Really Needed?

Although these are potential benefits of using vaping data, it must be said that these things could be easily determined without recourse to data collection. When you have a day of heavier vaping, you notice. Your battery dies a little sooner than it ordinarily would, you have to re-fill your tank more often or your notice a sizeable reduction in the amount of e-juice in the bottle you’re dripping from. These things aren’t exactly precise, but they give you a general picture of how much you’re vaping, and you don’t need to navigate around some clunky software or adjust awkward displays so you can see a clear representation of your usage over time.

Plus, many devices have an inbuilt puff counter, which you could simply reset each day (or any time period you choose) if you wanted to generally keep track of how much you’re vaping. The program does it automatically, yes, but does pressing a button or two on your device and writing down a three digit number really take much more time than regularly plugging in your device to upload the statistics?

Unless you have some sort of perverse interest in your usage of different energy settings or resistances that can only be satisfied by precise, exhaustive data, as opposed to just remembering the power and resistances you like working with, the entire thing seems excessive to say the least. Using the program feels like spying on yourself, as your nicotine consumption habits are laid out in front of you in painstaking detail for you to ogle to your heart’s content. “Ooh, I take about 100 more puffs a month at 9 watts than at 8 watts!” You’ll say, and if anybody has the misfortune to be in the room with you at this point they’ll undoubtedly respond with an unimpressed, “Who cares?”

What you’re left with in terms of the features you’ll actually use is a slight improvement on a puff counter, and even then the primary potential usage is if you want to reduce your nicotine intake. If you’re interested in the most important vaping-related metric, how many cigarettes you’ve smoked each day, you’re stuck with counting. The more you think about this vaping data, the more the number of people you can realistically imagine using it shrinks and shrinks.

Other Features of My Vapor Record

The vaping data might be catering specifically to vapers with uncontrollable nicotine consumption-related OCD, but there are some genuinely useful features on My Vapor Record too. You can change between wattage and voltage modes (which you ideally would be able to do on the device, but it’s still a benefit of the program for eVic users), configure how long it has to be left alone before the system or screen goes to sleep (and whether they do at all) and edit what shows up on the home-screen, as well as setting alarms based on time or puff count. Are these features absolutely necessary? Not really, but they’re clearly much more useful than finding out how your monthly puff-count is spread over various resistances.

With the exception of the occasional vaper with a penchant for “big data” style statistics and a strangely obsessive method of quitting smoking or cutting down on vaping, it must be said that the information you’re presented with is pretty useless. The My Vapor Record level of usage information sounds like a high-tech, futuristic addition to a mod, and the smartphone connectivity of the Smokio option seems like the sort of thing us 21st century-dwellers should have, but ultimately they both reveal themselves to be superficial, marketing-friendly wastes of time when examined under even a modicum of scrutiny. The future of vaping is an exciting prospect, but it’s not (or at least hopefully not) going to look like this.