Can You Vape and Drive? 9 Tips for Staying Safe

Vaping and driving seem to go together pretty well. When you’re stopped at traffic lights or just cruising down the road, reaching for your mod and having a quick puff helps you stave off withdrawal on long journeys and even just gives you something to do that isn’t just diligently watching the road with your hands at 10 and 2. But is it really safe to vape and drive? Are there any laws you should be aware of? And what are the best tips for vaping and driving safely? Here’s what you need to know.

Is it Illegal to Vape and Drive? There are no laws specifically outlawing vaping and driving. However, the answer to “is vaping and driving illegal?” isn’t that simple. While no laws specifically outlaw it, there are relevant laws in many states. Firstly, all states have some law relating to visibility through your windshield, whether this is about non-transparent materials covering the windshield or items blocking your view. This means that if your cloud obscures the windshield, blocking your view of the road, you’ll likely be breaking the law.

Careless and reckless driving laws might also come into play. If you’re fiddling with the settings of your mod or refilling a tank, this could easily fall under the definition of careless driving. You’re unlikely to do anything so extreme as to be considered reckless driving because of your vaping – since this is a more serious offense – but if you are recklessly ignoring the rules of the road because you’re vaping, you could run into bigger problems.

Some states – such as California – have laws preventing vaping or smoking with a minor in the car, and in general, if there are laws about smoking in the car with a minor it’s better to assume vaping is included too. Check your local laws, but the best advice is to refrain from vaping if there is a kid in the car with you anyway.

In the UK, the police have recently reiterated that it could land you in trouble for the reasons listed above. Essentially, while no law specifically prohibits it, vaping so much that it obscures your view of the road or messing with your mod (and so driving without due care and attention) will result in a fine if you’re caught.

9 Tips to Make Sure You Vape and Drive Safely

So while it isn’t specifically illegal to vape and drive, it’s best to exercise caution and care if you’re going to do it. But how do you ensure you don’t end up on the wrong side of the law? Here are some simple tips.

1 – Don’t Cloud Chase (Or At Least Open the Window) Cloud chasing – i.e. producing huge clouds of vapor from a sub ohm or other powerful device – results in enough vapor to potentially cause you issues. If you’re vaping and driving, it’s best to simply avoid cloud-chasing and choose a less powerful device for using in the car. Pod systems are great for this because they’re satisfying but don’t put out much vapor. If you don’t have any other options or you like cloud-chasing, you should open your window and blow your vapor outside to prevent it obscuring your windshield. 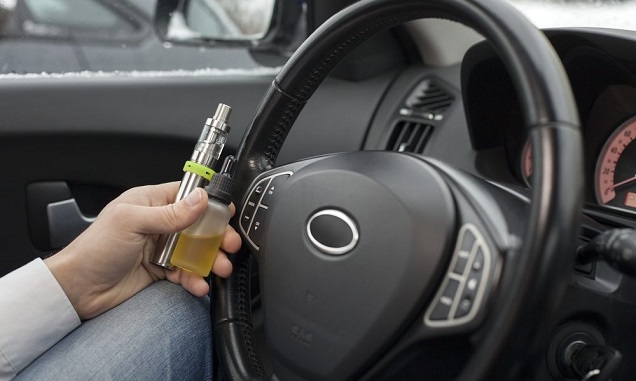 The common advice “don’t drip and drive” is worth repeating, as well as noting that refilling your tank when you’re driving isn’t a good idea either. If you’re fiddling with juice bottles, opening tanks or anything like that while driving, you won’t be paying enough attention to the road. There is a temptation to fill up at traffic lights – I know because I’m tempted by this pretty often – but the truth is that you don’t have very long between green lights, and if you don’t finish in time you’ll end up in a difficult situation. Avoid trying to set off again with a mod squeezed between your thighs and an open bottle of juice in your hand by either planning ahead, pulling over or getting a passenger to fill up for you.

3 – Pull Over if You Need to Change Settings Changing settings is generally easy to do, but again, if you’re looking at your mod you aren’t looking at the road. Police can – and will – pull you over if you’re seen tapping away at an electronic device when you’re on the road. While pressing the “+” button on your mod is easier than sending a text, the problem is basically the same and you should never do it. Just pull over if you need to mess with your wattage or temperature setting.

4 – Ideally, Only Vape at Traffic Lights While this isn’t strictly necessary, if possible, just vape when you’re waiting at traffic lights. One advantage of vaping over smoking is that you can vape as and when you want, rather than having a whole burning stick to get through once you light up. Use this to your advantage and just vape when you’re at a stop light or waiting in stationary or slow-moving traffic. If you’re driving for a long time on the freeway you can get away with some cheeky puffs (provided you crack the window open), but ideally you should avoid this so the cops don’t decide to make an example of you. This is a law in some states, but regardless of the legality, it’s best to not vape with kids in the car. While second-hand vapor isn’t known to be a health hazard to adults or minors, most parents will want to avoid vaping in a confined space with their children anyway, and if it’s someone else’s kid, that’s all the more reason to avoid it. If you’re travelling a long distance with kids, just pull over at a rest stop for a vape instead.

6 – Don’t Throw Pods Out of the Window 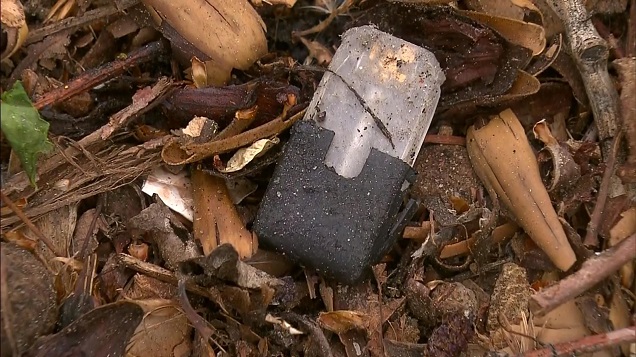 This is obvious and we probably don’t even need to say it, but to avoid all doubt: don’t throw anything out of the window when you’re driving. If you’ve just finished a pod, leave it in your car and dispose of it when you stop – never just toss it outside.

7 – Fill Your Tank and Prepare Beforehand The best advice for avoiding issues is to plan in advance. Make sure your tank is filled up, test out your chosen setting and ensure your battery is fully-charged if possible. The more you prepare beforehand, the less likely you’ll be to need to do anything like refilling that you’d have to pull over for. And if you’re prepared beforehand, you won’t be tempted to ignore the advice in this post and potentially run into issues as a result. Cars don’t come with mod-holders – at least not yet – so you’ll need to find somewhere safe and secure to store your device while you’re driving. Although they aren’t ideal, cup-holders can work pretty well depending on the design. Keeping your device in your pocket isn’t ideal, because if you have trouble getting it out, your hands will be off the wheel for longer and you probably won’t be paying enough attention to the road. Take a look around your car for a good spot, and if you don’t have one, get a passenger to hold it or just refrain from vaping unless you’re stationary. Although this isn’t about vaping and driving safely, if you vape in the car you might be tempted to just leave a device in there as your road vape. However, if it’s winter or you live in a colder climate, this could cause problems for your device. Generally speaking, liquids will get thicker in the cold, if you have a metal drip tip it could get very cold, and if it’s really cold outside (like −4 °F/−20°C) it could ruin your battery. The best advice is to bring your device in with you when you leave the car.

Staying Safe is Easy, But Crucial

The simple tips above show that it isn’t hard to stay safe and on the right side of the law when you’re vaping and driving. The main issue is the temptation to ignore the advice when you’re actually out on the road, but remember, one mistake could land you with a fine, or even worse, result in an accident. Don’t make excuses for yourself – it’s always better to just pull over than to put yourself or others in danger.