What We Could Learn From UK Vape Culture In 2020 2020 is already shaping up to be a defining year in the history of vaping and e-cigarettes. New legislation is afoot, public opinion is more divided than ever, while health bodies across the globe are coming out with studies seemingly by the week, each giving a slightly different verdict to the last. Uncertainty reigns supreme, but it doesn’t necessarily have to be this way.

In the UK, attitudes and governance, when it comes to vaping, are vastly different to that in the states. Much of the aforementioned uncertainty simply doesn’t apply. That’s not to say that a certain level of skepticism doesn’t exist, just that skepticism has yet to manifest itself in the form of hysteria and panic. And as a result, envious glances are being shone across the Atlantic as some in the US wonder how the UK has got things so right, when their own government has got things so wrong.

However, before we take a closer look at the UK and wonder what the US may be able to learn, it’s important to understand how we got here.

Vape culture in the United States in 2019

US vape culture experienced a real year of two halves in 2019. Through the early part of the year, the industry, and the culture went from strength to strength. And then everything changed.

A spate of vaping related deaths and illnesses were reported from all corners of the country, and from there an almost hysterical reaction took hold. Immediately vaping as a whole was blamed, calls for bans became deafening and before you knew it, we were in the midst of an epidemic.

There have already been thousands of words, including on EcigaretteReviewed, and hundreds of television hours devoted to the deaths, and the aim of this piece is not to simply go over that now well-trodden ground. Although when comparing vape culture in the US and the UK it is important to be able to understand and appreciate the context surrounding the issue.

What happened with vaping?

Through the summer and fall as more and more illnesses and deaths were reported by the press, hysteria overtook attention to detail. An undercurrent of uncertainty had already been bubbling away in regard to the amount of high school kids vaping, and as each vaping related death hit the news, that undercurrent exploded.

Caution and reason went out of the window and according to much of mainstream America, there was only one solution. Vaping must be banned.

Prior to the outbreak of deaths and illness, the latest data gathered showed that vaping was on the increase among both school and college students.

Furthermore, the data gathered by the University Of Michigan's Monitoring The Future Survey showed that vaping among college students for nicotine and marijuana were among the highest single-year increases for any substance since the survey was first commissioned back in 1975. 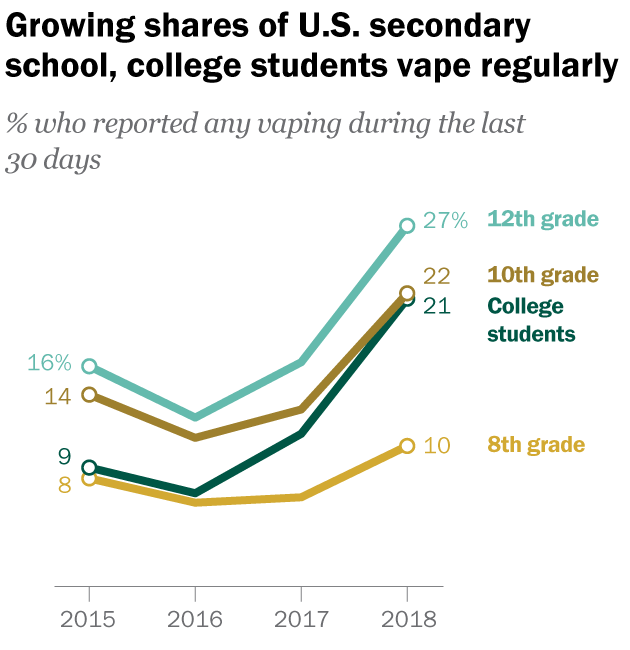 Failure with the ‘war on vaping’

It is statistics such as these mixed in with the illnesses which hit the news in the 2nd half of the year which fuelled the call for a blanket ban. However, as we have seen throughout history, particularly American history, prohibition and bans simply don’t work.

Going all the way back to alcohol prohibition, through the 1920’s to the Nixon or Reagan administrations disastrous “War on drugs” in the 70’s & 80’s. Simply making it illegal doesn’t solve any of the fundamental problems, and where it may appear to solve some issues, it will often create new ones. And in the process once again criminalizes young people and the less well off.

The response from some quarters last year eerily echoed that of the “War on drugs” mentioned above. Helen Redmond explored the parallels in detail in her article The Mystery Lung Disease Caused By Vaping Was A Textbook Drug Panic. In short, misinformation, uninformed panic leads to poor and ineffective policy, while the real issues and the real problems go unsolved.

In this instance, the cause was most likely due to Vitamin E acetates and pesticides in illicit THC products. Not legal nicotine juice. Not that you’d have noticed if you’d have been following the mainstream media.

Vape culture in the United Kingdom in 2019

In recent times and especially in the current political climate, the UK isn’t being held up as a last bastion of sanity and forward-thinking for many things, but their attitude to vaping and vape culture seems to be the exception.

Public Health England and The Royal College of Physicians found that vaping was 95% less harmful than smoking, while the UK boasts one of the most comprehensive systems of regulation in the world. These regulations include:

Not only do these regulations seem like good old-fashioned common sense, the statistics seem to show that they work.

Recognized as safer than cigarettes

A Public Health England review in 2018 found that vaping in the UK had plateaued at just under 3 million, they are helping up to 20,000 people per year quit smoking and perhaps most importantly “The evidence does not support the concern that e-cigarettes are a route into smoking for young people…”

Research published in June of last year by ASH further reinforced those initial findings by reporting that vaping is uncommon among young people and they vape mainly just to try it rather than to look cool.

It would be hard to argue that those statistics aren’t linked to the current regulations and controls. While all of the regulations outlined above are obviously important, it’s perhaps one of their side effects which is arguably even more crucial.

No space for the black market

By effectively committing to legalization and controlling vaping, to a large extent the UK has eliminated the black market. And it is this elimination (or near elimination) of the black market which has helped the UK avoid any of the problems that the US faced last year.

If all of the substances that are sold are known to the seller, the buyer and can be trusted, there won’t be any nasty surprises when the products are used.

The role of advertising

One of the biggest differences between the US and the UK is the way in which vaping is advertised, and who can see those adverts. UK advertising standards are much stricter, and the main point here is that these regulations keep vaping advertisements away from children.

Vaping companies also have a much smaller presence on social media, which especially among younger people should not be underestimated. Instead, vaping is spread through word of mouth and start up style promotions. Everyone knows that the products are safe and trusts the products because of the protected system already in place.

Advertising (all types) is less intrusive

To expand on this, research has been ongoing for years into the effect that advertising has on the behaviors and well being on children. With a 2018 Cancer Research UK Survey finding that children who watched more than half an hour of commercial television were more likely to ask for, buy or eat junk food.

Although the survey only refers to junk food it is reasonable to extrapolate that the impact of television advertising can be felt in other areas too. This data must surely act as a key reason as to why vaping statistics are so low for young people in the UK but much higher in the States when largely the same products are available. It could be argued that it would be a no brainer for the US to adopt a similar approach in light of this.

Where Do We Go Now?

In simple terms, research continues to show on both sides of the Atlantic shows that a regulated market is much better and safer than a market driven underground by prohibition. And while there are bans in place in countries such as Thailand, Japan and Singapore, in recent weeks US health officials have committed only to a partial ban covering the sale of the kind of flavored e-cigarettes favored by young people.

The Telegraph reports that the new rules will “prohibit fruit, candy, mint and dessert flavors from small, cartridge-based e-cigarettes that are popular with high school students. But menthol and tobacco-flavored e-cigarettes will be allowed to remain on the market.” While President Trump has also recently signed legislation that sees the minimum age for buying tobacco and vaping products from 18 to 21.

Although the new rules tighten current restrictions, they also represent a softening in the government stance, with the President and others around him previously advocating a total ban.

Despite the new rules designed to appease both the vaping industry and those against their sale and use, vape culture is still facing a very uncertain future. It is impossible to understate how much of an impact the ‘vaping crisis’ of last year will have had on the mainstream perception of vaping products and those who use them and sell them. If it transpires that an already skeptical public have turned against vaping then the ripple effect will be felt far and wide. There are people all over the country who are not only imbedded in the culture but also use it to make a living. From manufacturers to sellers there are thousands of people with a vested interest in how the next 12 months unfold.

It is also important to note that the picture around vaping is always evolving and always changing. Even in the more vape friendly UK there is still some uncertainty, with Public Health England reporting that “vaping is not completely without risks.” And there are certainly sections of the public who remain unconvinced on vaping safety and viability as an aide to quit smoking.

2020 could prove to be a boom or bust year for vaping. If 2019 has shown us anything it’s that vaping is always one crisis away from the headlines. Although no one knows what the future holds, it appears that the United Kingdom is much more prepared and guarded against any surprises which might arise. And until the United States follows suit in terms of regulation, advertising and product standards, it is difficult to see how public perception will improve, and how the culture will avoid the chaos which has blighted the last 6 months.