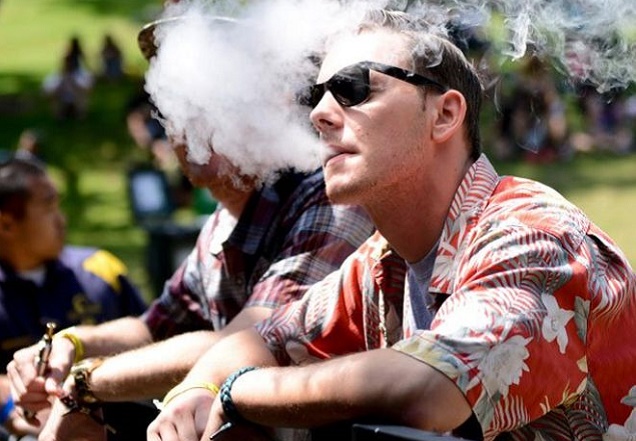 The new edition of the Week in Vaping is here, bringing you the news from the vaping world with some occasional snark thrown in for good measure. This week has seen the release of a couple of interesting studies – one good news, the other good news wrapped up in fear-mongering reporting – some typically irrational moves to ban vaping, even outside, and several great posts from across the community and elsewhere. Oh yeah, and did you know that you can vape cocaine now? You can’t, but saying something like that will definitely land you a spot on “Bullshit of the week.”

Another study aims to stir fear of second-hand vaping through the misleading use of the term “particulate matter” to describe droplets of liquid, conducting a review of available studies and performing an observation of the amount of PM2.5 (particles less than two and a half microns in diameter) present in the homes of smokers, vapers and non-smokers, concluding that “Both the literature review and the observational study indicate that e-cigarettes used under real-conditions emit toxicants, including PM2.5.” However, both Michael Siegel and Konstantinos Farsalinos point out that the actual study shows very little difference between the concentrations of particles in the vaper’s and non-smokers’ homes. The levels in a smoker’s home were about 60 times higher, but this point (shockingly) didn’t strike the authors as worthy of emphasis.

A new study looked at the effect of nicotine-free e-cigarette on lung function, exhaled nitric oxide and exhaled carbon monoxide, in both smokers and non smokers, in comparison to traditional cigarettes. The findings showed that “the short-term use of the specific brand of [nicotine-free] e-cigarette assessed in this study had no immediate adverse effects on non-smokers and only small effects on FEV 1 and FEF25 in smokers,” compared to numerous effects from traditional cigarettes on both non-smokers and smokers.

New federal legislation – the Remote Transactions Parity Act – could have huge impacts on vaping businesses, if it goes ahead. Rather than online sales being taxed in the state of origin – i.e. where the seller is physically located – it would shift the tax to that imposed by the destination state, vastly increasing the amount of tax codes a business will need to comply with and likely having serious impacts on small businesses. This infographic lays out the issues, which are likely to be very significant for the vaping industry, which is largely composed of small businesses operating online.

The City Council of Red Wing, Minnesota has approved legislation banning vaping in some public places, including public buildings, public transportation stops, near the ventilation systems of places of work and at outdoor events (except in designated smoking areas).

Ingham County, Michigan has put forward a proposal that would require e-cigarette sellers to obtain a tobacco license to continue selling them, but would also include banning sales to minors and undergoing the same compliance checks as tobacco sellers. Banning sales to minors obviously makes sense, but the annual cost of $335 for a tobacco license seems pretty excessive for stores only selling e-cigarettes.

Santa Clarita City Council in California has approved a ban on vaping wherever smoking is prohibited, including on buses, parks and trails, but people will still be allowed to try them out in vape stores. The reason? The non-existent “public health risks,” of course! Lemon Grove, California has done the same thing – banning vaping in restaurants, bars and parks – with a punishment of up to $500 in fines and penalties. 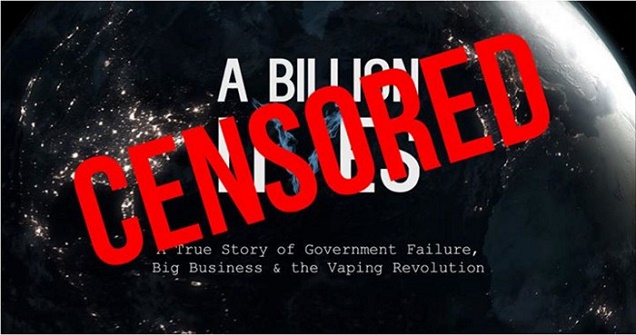 The upcoming documentary about vaping – A Billion Lives – ran into some bizarre issues with Facebook this week, with the film being classified as a “tobacco product” by the social media site, which consequently prevented them from promoting their posts. In fairness, they didn’t really call it a tobacco product, but they did say that it would “promote tobacco products or tobacco-related products.” The decision was met with understandable criticism, and thankfully – due to the actions of the vaping community – was eventually reversed. E-Cigarette Direct has an interview with the director Aaron Biebert about the episode here.

Clive Bates has called a statement from WHO Director-General Margaret Chan – which urged national governments to ban or regulate e-cigarettes because they are a gateway to smoking – “the most despicable and casually irresponsible thing I have ever heard from a senior official in public health.”

Professor Kevin Fenton from Public Health England does what Public Health England is pretty good at in a Huffington Post article: tells the truth about the evidence on vaping. The post stresses that they’re vastly safer than smoking, they help smokers quit and that there’s no evidence of the mythical gateway that the likes of Margaret Chan tout as if it’s an established fact.

Dick Puddlecote offers some proof, if it was needed, that Simon Chapman and other similar tobacco controllers don’t really care that their excessive taxes on cigarettes disproportionally impact the poor. As Puddlecote puts it, “Aussie Tobacco Control Worse than North Korea.”

A headline-hungry news article quotes Linda Bauld, Professor of Health Policy at Stirling University in Scotland as saying that e-cigarette marketing tactics are “harmful,” but she says her views weren’t accurately portrayed, and left a comment explaining how she was misquoted. She also said:

We need some forms of e-cigarette promotion to encourage smokers to switch to a far less harmful product. If current advertising is aimed at young people who don't smoke, it is failing because current levels of regular use in these young people are either tiny or non-existent. We need to track youth uptake carefully and conduct research on this and other aspects of e-cig use, but banning all forms of marketing is not the answer.

A great article from the British Medical Journal’s blog sets out the position of lawyer David Sweanor on e-cigarettes, effectively that “those who instinctively react against e-cigarettes on moral grounds are making a bad mistake.” He even goes on to state that these instinctive reactions are not only doing harm to those who’d otherwise switch to vaping, but they’re also protecting the profits of the tobacco industry.

Mt. Baker Vapor has interviewed Michael Siegel on their blog, with some interesting discussion of regulations and the state of vaping in the U.S..

E-Cigarette Direct published a great post from Fergus Mason about conflicts of interest, “Astroturf” accusations and who is paying the anti-vapers.

Totally Wicked has also published a post looking at the evidence-denying biased fear-mongering of Mark Drakeford, the architect of the impending excessive limitations on vaping in Wales.

There have also been a couple of developments about new products, the most exciting of which is the sneak-peek video of the upcoming ProVari Radius by ProVape, but Kanger’s new eGrip-style device the Nebox is also now available for pre-order, and we have a post with more information here. Out of a few contenders for the bullshit of the week prize this week, it has to go to this piece from TH Online, “What teens don't know about e-cigarettes could hurt them.” It starts off with some fairly standard fare about vape tricks luring youth and the overall perception that they’re safer than smoking and fun (which they definitely are, even though they're obviously right that non-smoking teens shouldn't start vaping), but then quickly descends into the realms of anti-vaping lunacy.

First-off, this anecdote is given as the “proof” that vaping is harmful for non-smoking teens: “Some consequences of adolescent vaping are obvious. The morning after vaping with friends at a party, Anderson said she woke up with chest pain and a sore throat. For the next month, her laugh came out as a wheeze.”

To translate: some girl vaped with some friends at a party and then ended up wheezing for a month. Now it’s been a while since I smoked, but as far as I recall, even a heavy night of smoking didn’t lead to me wheezing for a month. I wonder if there’s something she’s trying to keep secret from her parents and prying journalists…

Sherry Emery, a senior researcher from the University of Illinois at Chicago, then launches into “renormalization” and gateway claims: “A lot of people report that while they enjoy vaping, they find themselves needing a certain level of nicotine. Vaping isn't always going to satisfy their needs.”

Of course, this is rank speculation, and there's no evidence whatsoever of a genuine gateway effect – nor even a single anecdote, in this story or elsewhere – but it gets worse.

“Vaping devices are compatible with marijuana, cocaine, THC liquids and other drugs,” the article claims. THC liquids can be used in e-cigarettes, yes, but the rest? Marijuana requires purpose-built vaporizers, “other drugs” are generally taken in other (more efficient) ways, and cocaine? How the hell would you even go about vaping cocaine? Mix it with e-liquid and hope for the best? The suggestion boggles the mind, and that’s before you even consider the question of why you’d even bother.

Two other articles deserve an honorable mention. First, this one entitled “Vaporizer or e-cigs, it’s still smoking” manages to be even worse than the title suggests, being bizarrely concerned about vapers being proud of vaping (he was ashamed of his nicotine patch, so we should be ashamed too, apparently) and taking issue with the idea that vaping could be considered cool.

Secondly, a press release from Palm Beach Vapors talks about their “revolutionary” new vaping alternative: vegetable glycerin based e-liquid. Yep, plain old VG is the “innovative” approach they’ve come up with. Even more bizarrely, they describe PG as a “known toxic substance.”

As always, we’ve endeavored to include as much as we can in the Week in Vaping, but we may have missed some great posts or important stories, so if we have, leave us a link in the comments and we’ll update this accordingly! And, if not, check back next week for more!