Leonardo DiCaprio vapes up a storm at the Screen Actors’ Guild Awards, vaping bans are proposed indoors and outdoors, the American Lung Association says tobacco taxes aren’t high enough, e-cig batteries keep exploding (just like cell phone ones), the latest round of junk science gets brought back down to earth and we’re treated to a double-dose of anti-vaping bullshit: it’s the Week in Vaping.

A systematic review and meta analysis (published late last week) aimed to look at the effectiveness of e-cigarettes for quitting smoking. The review included five studies comparing e-cigs to nicotine replacement therapies or nicotine-free e-cigs, and found that nicotine e-cigs were generally more effective than non-nicotine ones, but the difference wasn’t statistically significant. The same goes for things like desire to smoke and relief of withdrawal symptoms. They conclude that more evidence is needed.

A randomized controlled trial of e-cigs for quitting smoking is set to take place in Canada, with almost 500 smokers being recruited and randomized to e-cigs with nicotine, without nicotine and counseling alone. The results won’t be available for a while, but a well-controlled study will be very informative for regulators and doctors looking to offer advice to smokers.

Jacob Sullum has written a solid debunking of the latest gateway study (from last week), pointing out the fact that the “smoking” that followed the vaping wasn’t necessarily regular smoking, and that teens who try vaping and then go on to smoke might have some other characteristic that makes them more likely to try both. In other words, it isn’t clear the “gateway” happened and “common liability” is more plausible. Brad Rodu has also written an excellent post showing the glaring issues with this study on his blog.

Although it’s a little after the study was published, the BBC did a great job of taking down the Glantz’ meta-analysis that claimed e-cigs reduce your odds of quitting this week. 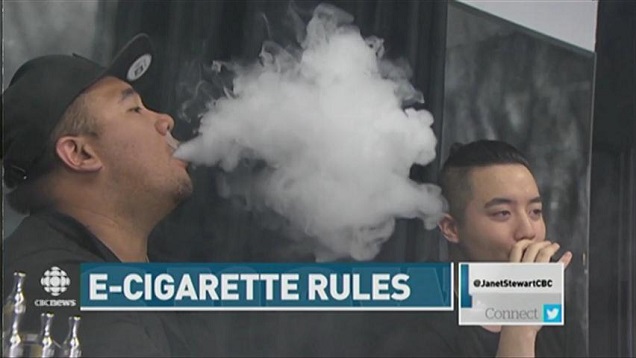 Vermont is considering banning vaping anywhere smoking isn’t allowed, including in public spaces and within 25 feet of state-owned buildings. It also restricts vaping in any workplace and proposes rules for where they can be stored or displayed in vape stores. Because, err… the children, or something.

New Mexico is considering joining in with the “ban indoor vaping” thing too, after a senator noticed people vaping in the theater when he was at the movies.

Southlake, Texas has proposed an ordinance banning vaping where smoking isn’t allowed, as well as within 20 feet of the entrance or exit of any public building. Munroe County, Indiana is also considering a ban on vaping in indoor public places.

Ashland, Oregon has proposed expanding existing anti-vaping laws – with Oregon already banning vaping in all places smoking is prohibited – to include all of “downtown.” In other words, outdoor vaping would be banned. There is a potential exemption for bars and restaurants that hold a liquor license, though, where they could apply to allow vaping and smoking outside their establishments.

Saskatchewan, Canada is moving forwards with a proposal to ban vaping anywhere smoking is banned. The proposal has passed with the Urban Municipalities Association, and will be forwarded to the province’s government.

The proposed indoor vaping ban in Wales will exempt bars that don’t serve food and where unaccompanied children aren’t allowed. The Liberal Democrats in Wales will be trying to add further amendments to the bill as it continues to make its way through the legislative process.

In Calgary, a bylaw banning vaping everywhere smoking is banned – with an exemption for vape stores – is working just fine, according to a review. It turns out vapers listen to laws, and moreover, all of the vape stores they contacted are preventing minors from entering, even though this isn’t covered by the law. They need to be careful, otherwise people might get the idea that e-cig sellers aren’t marketing to children at all.

In Oregon, there are two e-cigarette related proposals under consideration. One bill aims to make e-cig sellers require a license – to create consequences for anybody selling to minors – while the other aims to establish a 50 % retail tax on e-cigarettes. The first proposal is generally supported, but the second is having trouble winning over republicans and vape store owners, for obvious reasons.

The Council of Cedar City, Utah is considering an ordinance to prevent any new vape shops opening up in the region, you know, because “the children.” This pearl of nonsense from the director of cardiology at a local hospital sums up the level of the discussion: “In fact, e-cigarettes are known to have high instances of heart attacks.” Err… What?

The American Lung Association has released it’s State of Tobacco Control report for 2016. The issue of vaping does come up in several places – for example, they admonish the FDA for not having enacted regulation yet – but it’s most interesting for the insight it gives into the tobacco control mindset. Look at the graph of grades for state tobacco taxes, for example (above), which is almost entirely pink (grade F), suggesting that the ALA want low-income smokers to suffer as a result of regressive taxes even more than they already do.

Vaping Regulations Around the World

The Vaping Giraffe has another update on the situation in Norway, where the government is proposing allowing the sale of vaping devices under the guidance of the TPD.

Vape News Magazine has an informative article about the discussions going on at the White House Office of Management and Budget about the proposed FDA regulations. Vendors and companies have been invited to the office to discuss the financial implications of the regulations for small businesses, which will be catastrophic. They were received fairly positively, according to the report.

An article in the Lubbock Avalanche-Journal takes a look at how the upcoming FDA regulations will affect vape stores in the US. The article interviews Frank Blankenship, the owner of Lucky Ruckus, and does a good job of covering the serious consequences of the regulations as they currently stand.

The world collectively lost its shit this week when Leonardo DiCaprio was spotted vaping (the horror!) at the Screen Actors’ Guild awards, which the American Lung Association said was “deeply troubling.” If somebody vaping instead of smoking is “deeply troubling,” I’d love to see how extreme they’d have to be to describe the Zika virus or the refugee crisis. Thanks to the ALA’s hissy fit, it’s been confirmed that there will be no vaping at the Oscars.

Hardly a week goes by without a report of an e-cigarette explosion, and although we’ve stopped mentioning it recently, one this week is worth covering. The article follows the standard progression – and even includes a statement that rare explosions mean that vaping isn’t safer than smoking – but admirably leaves some battery safety tips at the end, which is definitely commendable. In other news, two cell phones (at least) exploded this week. Don’t worry, though, nobody is suggesting you stop using cell phones; that would be ridiculous.

There’s a rage-inducing post on Blasting News from Kevin Crowley about the continuous stream of misinformation surrounding vaping, and the supposed financial motivation behind them. Regardless of whether corruption is really behind the attacks on vaping, it’s definitely a disturbing trend that shows no sign of letting up.

Dick Puddlecote has published a post that wonders: “Should We Lie Like Tobacco Controllers?” The general consensus in the comments is “no, we’re better than that,” but it’s an interesting debate, regardless.

Vape Emporium has published a post comparing the costs of vaping (using UK figures) with a Vype device, an Evod 2 and an iStick 60 W. The post shows that the Evod 2 is the cheapest, although it makes the questionable decision of comparing 2 ml per day e-liquid consumption with the Evod to 4 ml with the iStick. All are way cheaper than smoking, of course.

Guide to Vaping has a great post about battery safety, entitled “Batteries Don’t Just Explode.” The post makes several important points about explosions being possible with the misuse of any battery, and offers some handy tips about staying safe with your e-cig batteries.

Electronic Cigarette Consumer Reviews has a post on the difference between a genuinely good deal for vaping products and a thinly-disguised rip-off, that’s well worth reading if you’re in the market for a new device.

After Leonardo DiCaprio vaped like a boss at the Screen Actors’ Guild awards, the American Lung Association apparently went a little further than just saying it was “deeply troubling.” At least according to TMZ (not the best source, I know), the association said that vaping poses a second-hand cancer risk.

According to the Daily Mail report, the ALA only said they release carcinogens, but the interpretation from the more sensationalist and easily-led folks at TMZ clearly reveals the intent behind the statement. Needless to say, with almost every study on second-hand vaping not even detecting carcinogens (beyond background levels), this is a highly unlikely claim.

Since that claim is probably (mainly) TMZ’s fault, a solid runner-up comes in the form of a Campus News article about vaping, which includes an absolute howler. After implying that metal particles and formaldehyde are intentionally added to liquids, the author writes:

Some of these liquids are even made with a vegetable glycerin base — a plant derived substance — which has caused instances of Lipoid Pneumonia.

This would be concerning if everybody else knew as horrifyingly little about chemistry as author Crystal Brown does. Glycerol is an alcohol: you can’t just decide something is an oil based on how it looks, and alcohols cannot cause lipoid pneumonia. And don’t get me started on the “I’m-not-sure-how-to-write-this” capitalization.

That’s All for This Week!

Check back next week, when we’ll undoubtedly learn the next way the media wants us to think vaping is going to kill us all, we’ll see more local governments say things about “the children” and how we don’t know enough about vaping yet, and someone else will step off the edge of reason and into the vast chasm of unsupported nonsense. I’m sure it’ll be fun.