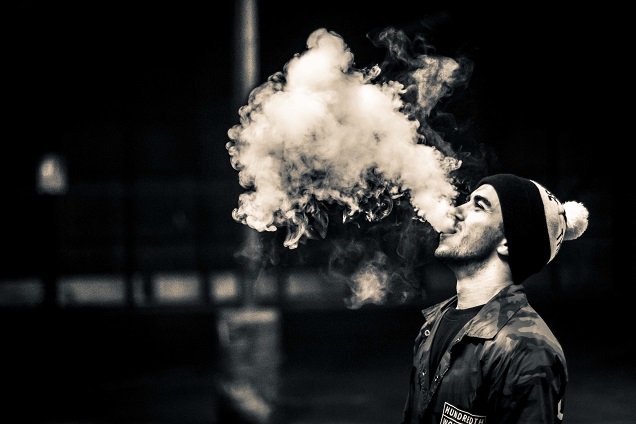 Tobacco controllers sneak into a vape convention and discover “particles” in the air, governments pass extreme and over-reaching legislation – even restricting online sales of e-cigs to protect “the children” – a politician vapes in Congress, there’s some great news for vaping in Sweden, UK data continues to show that the disastrous population-level consequences of vaping we keep hearing about don’t seem to be materializing, and a politician in Utah makes such a stupid statement it’s almost as if he was trying to win Bullshit of the Week: it’s the Week in Vaping.

Vaping in the UK – New Data

The UK’s Office for National Statistics has published new data on smoking and vaping, mainly from 2014 but with a vaping questionnaire from 2015 too. The results show that there are 2.2 million vapers in Britain, comprised of 59 % smokers, 39 % ex-smokers and just 2.5 % never-smokers. About 850,000 ex-smokers currently vape, and another 720,000 ex-smokers have vaped before but had stopped by the time of the survey.

They also asked what people thought about the likely risks of vaping, and about a quarter got it entirely wrong and said they thought vaping was as bad as smoking, and only 29 % said “much less harmful,” otherwise known as the answer in line with the evidence. Clive Bates has summarized the most interesting results in a blog post.

After the hilarious paper in which public health discovered vape conventions and got a little sad they weren’t invited to share their baseless scaremongering, there has been another foray into the world of vaping conventions by researchers. This time, they’re worried that the “particulates” in the air are a massive threat to the health of the people who attend and work at the conferences, but completely brush aside the crucial problem that it’s what the particles are that matters. In this case, they’re droplets of e-liquid; probably posing very little threat to bystanders, if any at all. The various issues with the researchers’ approach and suggestion that vaping should be banned indoors are well-deconstructed by Clive Bates.

A study presented at a conference has reportedly found that e-cigs suppress the function of 358 genes related to the immune system, in comparison to 53 for tobacco cigarettes. This led to suggestions that vapers may be particularly prone to infections, but without a full paper to look at, the details are thin on the ground, and the understanding of the impacts of gene suppression is still limited, according to the report. In other words, this is another possibly relevant, possibly meaningless result we probably won’t hear anything else about for a while.

Washington’s Poison Control Center has released data from 2015, showing a slight decrease in e-liquid poisonings compared to 2014. The difference is small, but the same thing happened at the national level in 2015, so rates of e-liquid poisonings are (hopefully) unlikely to be making such big headlines in the future.

Washington has passed HB 1645, which prohibits the sale of vapor products without a license, mandates child-resistant packaging, requires ingredient listing and warning labels, prohibits vaping on school property and restricts internet sales of vaping products – all to reduce youth access to vaping products. The online sales limitation is obviously the worst part of the legislation, seriously impinging on adults’ access to vaping products while presenting no clear benefit to “the children,” who don’t tend to have credit cards or bank accounts they can use to make online purchases for age-restricted products.

There is a huge 86 % tax proposed on vaping products in Utah, and some high school students were bused in to the State Capitol this week to show their support. The Students Against Electronic Vaping (as if there is any other type of vaping) group apparently attended because they’ve seen friends become addicted to nicotine as a result of vaping. Meanwhile, vapers and harm reduction advocates held up “I vape, I vote” signs in silent protest. Last week, California republican Duncan Hunter vaped in a congressional hearing, at which he was opposing a move to ban vaping on planes, and has been offering a lot of support for the industry in general. Greg Conley called him a “champion” for the industry, and as an ex-smoking vaper himself, Hunter understands why we need vaping, and is fighting for it accordingly. But, as the Hill is keen to point out, he’s received some money from the tobacco and e-cig industries, which (apparently) means everything he says is wrong and should be completely ignored.

The ban on the sale of nicotine-containing e-cigarettes in Sweden has been overturned, with the Supreme Administrative Court of Sweden reversing a previous decision to class nicotine-containing e-cigarettes as medicines. The court based its decision on the need for more evidence on the effectiveness of e-cigs as a method for quitting smoking, which precludes them from being treated as a medicine.

Rip Trippers royally pissed everyone off this week when he decided to become a corporate shill for an electrolyte supplement company, but pretended the whole thing was genuine. He effectively made an infomercial based on symptoms he decided were caused by vaping, and said this magic electrolyte potion fixed everything. As in, “click this link and make me some money.” He’s been heavily criticized pretty much everywhere, and such as in this (long) video from Tristan Pope.

A Guardian article puts forward a balanced and (consequently) positive case for vaping, written by long-time harm reduction campaigner Alex Wodak, who notes the similarities between the vaping debate and others around harm reduction. Carl V. Phillips has taken a look at the post on his blog too, praising the good bits while still arguing that he ultimately failed in the intended goal of “asking the right questions.”

Electronic Tobacconist has a great post about the limitations of using mice to study the human respiratory system, which basically comes down to the fact that humans really aren’t mice. It’s shocking, I know, but the post details several studies showing the poor relationship between mouse and human responses to exposures. In other words, getting mice to breathe vapor to see how it might affect humans is pretty much useless.

A Change.org petition demanding Facebook remove e-cigarettes from its “tobacco” category has breached 10,000 signatures, so at very least, should receive a response. Of course, the presence of nicotine doesn’t mean something is tobacco, which is why eggplants and numerous other vegetables aren’t tobacco products.

The small blog J.Orelma Vaping Things has translated an article from Finnish with the title “Level of harm reduction discourse in Finland.” It’s full of the usual statements about addiction and the children, showing that nonsense about e-cigarettes spreads far and wide, and always looks the same. I don’t know if the similarity to US anti-vaping messages is comforting or just depressing.

Sarah Jakes of the New Nicotine Alliance in the UK has a good blog post on the discussion surrounding vaping, and specifically how the focus on safety and effectiveness for quitting smoking leaves out an important factor: pleasure. Vaping is fun, and that’s one of the many reasons it’s been so successful, and we – as well as those in public health – shouldn’t forget that.

Mic has published a to-the-point article about exploding e-cigs, hoverboards, drones, electric cars and, in general, lithium based batteries. The article draws attention to lax manufacturing standards as being a big part of the problem, and does an admirable job of showing that the issues are far from confined to e-cigarettes.

Bill Godshall’s THR update has been published, giving a rundown of and links to the most important vaping-related news over the past couple of weeks.

During discussion of the proposed 86 % tax on vaping products in Utah, Republican Paul Ray of Clearfield apparently decided that heaping on the bullshit was the only way to convince people to tax the hell out of vaping.

Vapers will have lung cancer and a whole lot of other things because they’re puffing formaldehyde. Formaldehyde is five to 15 times more likely to cause cancer than a cigarette. In five to 10 years from now you guys are gonna be turning around trying to sue these companies because of the health issues.

Formaldehyde is more likely to cause cancer than a cigarette? Clearly what’s happened here is that Ray dimly remembers the New England Journal of Medicine formaldehyde study, which used an unrealistic methodology to conclude that the cancer risk attributable to formaldehyde could be 5 to 15 times greater in vapers, and he is trying to quote that result.

What he actually said, though, is patently ridiculous. The idea that formaldehyde is more likely to cause cancer than smoke is utterly obliterated by the fact that smoke contains formaldehyde (and in higher quantities than e-cig vapor under normal usage conditions). Anyone with even a shred of knowledge of the contents of cigarette smoke would have been able to spot that glaring, humongous error. It seems, based on this statement, that Ray has literally no idea what he’s talking about.

So after the usual dose of over-hyped studies, irrational legislation and flagrant bullshit, that’s it for the Week in Vaping. Check back next week for more of what’s going on in the world of vaping, and undoubtedly more fearmongering and suspect statements broken up by occasional, fleeting glimpses of objectivity and rationality.