It's been jam-packed with research this week, with one study leading to claims e-cigarettes can cause lung cancer, ones saying that passive vaping and spilling nicotine on your skin are basically nothing to worry about and a study concluding that vaping does help smokers quit, it’s more of what we’ve come to expect. As always, there has been a smattering of vaping bans and some legislation, and some fantastic blog posts from across the community.

Oh yeah, and if you’re worried about the uncertainty surrounding the risks of vaping, you can relax. This guy from Malaysia who wrote a letter to a newspaper has got it all sorted out: turns out vaping is hallucinogenic and basically going to kill you. (Ridiculous, but at least he’s won Bullshit of the Week.)

So here’s the Week in Vaping.

A new study looking at the potential for passive vaping using MarkTen e-cigarettes has found no evidence of a risk to bystanders, with PG, VG, nicotine and menthol levels being below the level of quantification (i.e. too little of it to reliably say how much there was) and formaldehyde levels being the same as the background readings (without vaping).

The study does have limitations, though, since it was conducted in a room the size of a conference room, the volunteers were only instructed to take pre-specified numbers of puffs (rather than vaping as much as they wanted), the air exchange rate was higher than in some other studies and the background readings were taken on different days to the testing. Other studies have found quantifiable levels of PG, VG and nicotine too. Michael Siegel has written a blog post summarizing the study, although it offers nothing in the way of critique.

A new study has looked at the risk of absorbing nicotine through your skin from e-liquid, testing an 8 mg/ml e-liquid on a sample of human skin. The results showed very slow absorption (0.00482 mg per square cm per hour). In other words, you’d have to have e-liquid on a large patch of your skin, without washing it off, to even notice any symptoms. Tom Pruen has a great post at the ECITA blog explaining the results.

A study presented a conference in the UK has found evidence that e-cigarettes help smokers quit. The study surveyed 50 smokers and ex-smokers about their use of e-cigarettes and the impacts on their health, with about a third of the group having COPD. Of the group, 80 percent had vaped, 42 percent had reduced the amount they smoke and 38 percent had quit smoking entirely. Additionally, about half said their breathing had improved, and almost one in five were coughing up less sputum since switching.

It’s only a small study, though, and there were only 10 non-vapers, so it can’t really be used to make comparisons. Overall, it doesn’t really tell us very much you wouldn’t pick up from the abundant testimonials online.

Finally, a study has found that e-cigarette vapor contains free radicals, but that levels are 100 to 1000 times lower than in cigarette smoke. Free radicals are linked to the “oxidative stress” seen in studies of the effects of vaping on the lungs, and are linked to cancer. Much like pretty much all of the evidence on the chemistry of vapor, it shows that while e-cigarettes are unlikely to be completely safe, they appear much, much safer than cigarettes.

Massachusetts is considering raising the minimum age for smoking to 21. The move may well go ahead – as it has in Hawaii – but whether or not it will have an impact on youth smoking remains to be seen. Under-age teens manage to get tobacco now, so it’s hard to see why making them more under-age will have much of an impact. Kansas City and Wyandotte County have approved raising the minimum age this week too.

Utah’s Health Department is finalizing a bill to bring in child-resistant packaging for e-liquids and a warning that nicotine is addictive.

Retailers who want to sell e-cigarettes in Montana will require a license from next year, which will only cost $5 per year. 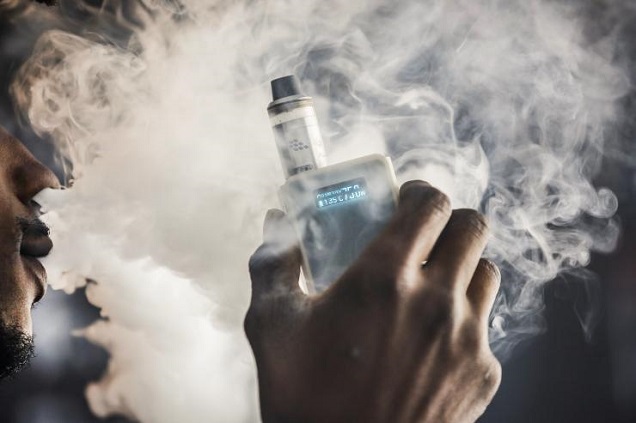 The sultan of Johor in Malaysia has announced a ban on e-cigarettes and has ordered that all vape shops close by January 1st. Needless to say, vape stores and Malaysian vaping groups are not happy about the decision.

The proposed Welsh ban on indoor vaping is still causing dispute, with AMs divided on the issue. On one side, you have the reasonable view on the issue, based on the available evidence and compassion for smokers trying to quit, and on the other you have concerns about “renormalization” and “gateway effects” that pretty much don’t exist.

Michael Siegel and Scott Ballin have written a great article about the upcoming FDA e-cig regulations, pointing out the hypocrisy evident in the way cigarettes and e-cigarettes are treated and the disastrous effects of the proposed February 2007 “grandfather date.” A paper accusing Not Blowing Smoke of altering CDC ads to promote vaping (which they say is copyright infringement), and claiming the group has close ties to the e-cigarette industry, has been criticized by President Stefan Didak for being basically wrong about everything. The post in the Libertarian Republic runs through many of the issues with the claims made in the paper.

A nice little blog post from the Vaped Crusader talks about the dangers of sharing nonsense stories about vaping: they’re a lot like those chain emails (“share this with 10 people immediately otherwise monsters will eat your children,” that type of thing) except that sharing these risks discouraging people from taking a positive step to improve their health.

A post on Guide to Vaping addresses “Why Vaping is Dangerous” without depending on already-debunked studies and innuendo. The post really looks at the financial and philosophical forms of “danger” posed by vaping to anti-smoking groups, governments and the general public. This is, in part, addressing the question of why so much information we encounter about vaping is negative.

There’s a brilliant post by Norbert Zillatron on Vapers in Power about “Mendacious Martina” (as Dick Puddlecote calls her), ex-Bullshit of the Week winner and pretty much the German equivalent of Stanton Glantz. The post dissects her tactics and gives a useful general overview of the situation for German vapers. Bonus points for using the word “bansturbators.”

The Vaping Giraffe has published an informative post looking at how the increase in snus use affecting smoking rates in Norway – in short, showing that the rise in snus use since around 2000 is having a very real impact on smoking rates.

The New Zealand Vaping Alliance has publicly declared support for the Ministry of Health’s draft advice on e-cigarettes for healthcare workers, which acknowledges the Public Health England report, and consequently provides accurate information on e-cigarettes.

Bill Godshall’s THR update has been published, which covers a lot of the same ground as we have in recent weeks, but is still well-worth checking out.

Finally, we've also published a post looking at the countries around the world with full bans on vaping (in other words, places vapers shouldn't take a vacation to). Malaysia has continued to be a wellspring of bullshit this week, and with the ban on e-cigarettes in a whole province just shows how well it’s apparently working. In response to an article about an 11 year old “vape junkie,” a letter-writer launches into a tirade of many of the familiar statements about e-cigarettes taken to the extreme, mixed with the utterly bizarre and used to conclude the absurd. It argues for a ban on vaping across all of Malaysia.

Among the weirdest comments, considering the discussion is about vaping, is:

It is questionable and doubtful that the inhalation of any foreign substances (hallucinogenic or otherwise) can ever be considered normal.

Hallucinogenic? I have no idea what he’s referring to – whether he’s of the strange view that nicotine is hallucinogenic or he thinks people are vaping LSD – but in any case it’s quite clear that this is some next level nonsense.

Then, towards the end of the odd, ranting letter, he adds:

We can therefore safely conclude that vaping is not safer than smoking; it is equally bad though not worse yet.

“We” can, can we? Thankfully for letter-writer Thomas Kok, he has this whole “risks of vaping” issue completely sorted out. Tell Public Health England to just scrap their report concluding that e-cigarettes are 95 percent safer than smoking. They clearly got it all wrong, as did the 180-plus studies they cited. It turns out vaping is basically the same as smoking and vapers are probably tripping balls 24/7.

The story he’s responding to treats vaping like using some seedy drug, so perhaps his outrage just got the better of him when he penned the letter, but the confidence he has in his utterly incorrect conclusion (we can “safely conclude”) still raises a smile.

Check Back Next Week!

As always, we’ve done our best to gather all of the most important news and best blog posts from across the community, but if we’ve missed something important, just let us know in the comments! And check back next week for the next catch-up!