The problem with a lot of the research on youth e-cigarette use is that the studies dance around the issue they’re designed to address: are non-smoking youths picking up nicotine use through vaping and progressing to regular smoking? That’s the core of the gateway hypothesis, but more often than not we merely end up with studies that show that small numbers of non-smoking teenagers have tried e-cigarettes at least once, with no indication of regular use other than the fact they’d vaped in the month prior to the study. This is obviously next-to-useless for establishing a gateway to tobacco use in anything but hypothetical terms. A new study (full text available for free) actually asks the questions that need to be asked, and (surprise, surprise) found no evidence of a gateway effect from e-cigarettes.

The researchers recruited 1,304 college students (on psychology and speech courses – mostly white and female) from 2012 to 2013 (in the academic year) to complete an online survey. The questions covered their first use and current use of combustible cigarettes, smokeless tobacco, snus, hookah, dissolvable tobacco, e-cigarettes or nicotine replacement therapy (NRT). However, not many of the participants had tried e-cigs, snus or dissolvable tobacco, so they were all lumped together for the analyses under the label of “emerging tobacco products.” For those who’d used a product, they asked whether they’d tried it once, still used it occasionally or whether they were daily users.

Almost half of all the participants had ever tried one of the products under consideration, and out of these individuals, hookah was the most-commonly tried product, followed by cigarettes, emerging tobacco products and smokeless tobacco. For their first-tried product, most (50.6 percent) started with cigarettes, with smaller amounts trying hookahs, smokeless tobacco, and emerging tobacco products (9.2 percent), in that order.

From the whole sample, only 4.5 percent (59 individuals) had tried emerging tobacco products before anything else, and 78 percent (46 individuals) of those had tried e-cigarettes first. Only 3.2 percent of the sample were daily or non-daily vapers, compared to 8.6 percent who were daily or non-daily smokers. Of course, e-cigarettes have increased in popularity since 2012-2013, so the current numbers are likely to be bigger than this. However, recent youth vaping data has roundly ignored the crucial question of daily or even regular use, so we still don’t have much to go on. 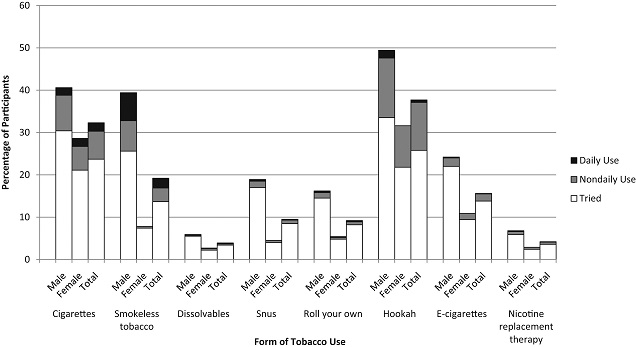 The most general form of the nicotine-related gateway hypothesis looks on shaky ground altogether, according to the basic findings and the subsequent analyses. The core idea is that trying nicotine in some specific form will make you more or less likely to try another type, and the main concern for anybody rational is combustible cigarettes. The analyses revealed that only sex was a significant predictor of current tobacco use, with men being about 50 percent more likely to use tobacco as women.

The alternative to the “gateway” idea is the considerably more sensible “common liability” model, which – instead of ascribing borderline-magical properties to specific substances – simply states that some people are more likely to try drugs (of all forms) or become addicted than others. They share some characteristics (whether genetic, environmental, psychological or all of the above) that influence their likelihood of trying something out. So the real question is, with very little in the way of evidence for the gateway idea, why bother with it at all?

Conclusion – Vaping Does Not Lead to Smoking

This study wasn’t perfect, admittedly. At the time these students were likely trying their first nicotine product, vaping wasn’t as popular as it is today, and those who tried e-cigs first probably had a couple of puffs on a cig-a-like. There’s a chance that future studies will find that starting out vaping really does make people more likely to take up smoking, but given how rare it is for studies to even attempt to answer the most important questions, this seems like the most reliable and relevant evidence to date.

And the study’s message is clear: trying e-cigarettes doesn’t lead people into smoking tobacco. Given that this would require switching from a pleasant, delicious-tasting habit to one that tastes like smoldering ass and is about 100 (if not more) times as dangerous, all for the exact same drug, it doesn’t exactly seem likely.