Study – Should Vapers Worry About the Flavoring Chemicals in E-Liquid?

We’re used to hearing a lot of implausible or overblown “risks” attributed to e-cigarettes, but one of the few areas where there could be genuine cause for concern is with the inhalation of food flavorings. The core issue is that while the flavors used in e-liquid are safe to eat, we pretty much don’t know what effect most of them will have when inhaled long term. A new study has investigated the flavoring chemicals in e-liquids, and has generated some concern in the media about their risks, with Time using the headline “E-cigarette flavors may be dangerous, study says.” But is this another example of overstating a minor risk for the purpose of spreading mistrust of e-cigs, or is there actually something to it?

What They Did – Looking for Flavorings in Flavored E-Liquid

The study (available in full for free) comes from the same group who brought us the infamous, we-don’t-understand-how-to-use-VV-devices formaldehyde study, and can be described very simply: they were looking for the quantities of various flavoring chemicals in a sample of 30 e-liquids. They tested the liquids, rather than the aerosol (i.e. the vapor) generated from them, but it’s probably reasonable to assume similar quantities would be inhaled as are present in the liquid. They tested liquids from companies like Mt. Baker Vapor, Halo, Blu and NJOY, including both tobacco and sweeter options.

What They Found – Most E-Liquids Contain Small Quantities of Flavors The short version of what they found is summed up perfectly by Dr. Farsalinos’ headline for his blog post on the study, “flavored e-liquids contain… flavors.” Specifically, they found that 57 percent of the e-liquids tested contained less than 10 mg (around 1 percent by weight) of flavorings, with the remaining 43 percent containing more. Two e-liquids were composed of over 3 percent flavorings, with one at 31.4 mg and one at 43 mg per ml. Common flavorings used include maltol and ethyl maltol, vanillin and ethyl vanillin, ethyl acetate, ethyl butyrate and benzyl alcohol. In total they found 24 compounds, and 6 of these were aldehydes, which the authors point out are “primary irritants” of the respiratory tissue.

Dr. Farsalinos comments that irritation doesn’t necessarily mean damage or long-term negative effects, and points out that many fragrances are actually aldehydes, and these are also inhaled. The crucial point is that the irritation and potential negative effects are dependent on the levels to which you’re exposed.

More Half-Assed Calculations: How Much Flavoring Chemicals do Vapers Inhale? 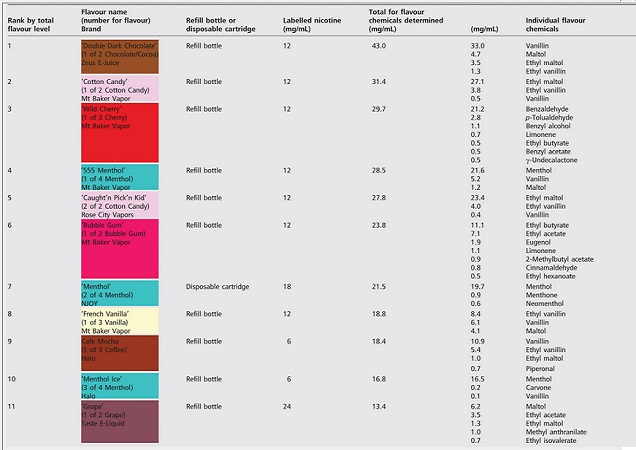 The majority of the concern about the study is based on the finding that “some” e-liquids contain flavorings at levels which mean vapers could be exceeding the recommended occupational exposure limits, specifically for benzaldehyde (which is used for an almond flavor and smell) and vanillin (for the flavor of vanilla, in case the name didn’t tip you off). However, in the spirit of the back-of-the-envelope calculation in the formaldehyde study, this was calculated using the worst case scenario, arguably in order to produce a more striking result.

After calculating the daily maximum recommended exposure (60 and 67 mg/day for benzaldehyde and vanillin, respectively), they used the assumption of 5 ml per day e-liquid consumption (which they say is “commonly self-reported in online ‘vaping’ forums”) and the highest levels of each chemical found in any of the 30 e-liquids to produce estimates for vapers’ daily exposure of 105 mg and 165 mg per day. This is over twice the recommended maximum workplace exposure to either chemical.

However, some unpacking is required here. Firstly, as Dr. Farsalinos points out, only one e-liquid – even based on these calculations – from the whole sample of 30 would expose users to more benzaldehyde than the recommended maximum, and only one would exposure users to more vanillin than the recommended maximum. Looking at the full tables in the study shows that only three e-liquids contained any benzaldehyde at all, and while many e-liquids contained smaller amounts of vanillin, the next highest concentration was just 7.1 mg/ml, or around 0.7 percent by weight (compared to 33 mg/ml or 3.3 percent for the sample used in the calculation). Similarly, the other e-liquids containing benzaldehyde only had 1 mg and 0.6 mg/ml (with 0.9 mg/ml of a benzaldehyde-and-PG compound in the latter sample), compared to 21.2 mg/ml for the sample used in the calculation.

So the “worst case” nature of this calculation is immediately obvious. This only continues when you consider the only vaguely referenced (no actual citation) estimate for the average e-liquid consumption of 5 ml per day. This seems to have come from the E-Cigarette Forum survey from 2014, which found that the most common answer for e-liquid consumption was 4 to 5 ml, which 22.6 percent of users said they got through each day. However, the survey seems to have been missing a 3 to 4 ml option, and the next most common answer was 2 to 3 ml. Clearly, 3 to 4 ml would have been a common choice, possibly even the most common, had the option been available. If we assume that those in the 4 to 5 ml group largely consumed less than 5 ml, the survey actually shows that 58.7 percent of vapers have less than 5 ml of e-liquid per day, but strictly speaking all we can say is that 58.7 percent consume 5 ml or less, with the emphasis on the less. It seems like it would have been more reasonable to choose 4 ml as an estimate based on this data.

So, what happens if you do the back-of-the-envelope math a little better? Of the 14 e-liquids containing vanillin, the average content was just 4.54 mg/ml. Even using the questionable assumption of 5 ml per day, this would only work out to about 22.7 mg consumed per day, and for 4 ml of e-liquid per day it’d be just 18.2 mg of vanillin per day. This is around 3 to 3.7 times less than the workplace exposure limit. Going through a similar process for the benzaldehyde (although less reliably, owing to the fewer liquids with it present) gives an average of 7.6 mg/ml and an exposure to 30.4 to 38 mg per day (depending on liquid consumption), again, lower than the recommended maximum daily workplace exposure.

It also goes without saying that it would be unusual (to say the least) to vape the same e-liquid flavor all day, and much more so to vape it all day, every day, for several years. In short, pretty much everything about the author’s calculation is questionable.

How Much Flavoring Chemicals do Smokers Inhale?

The authors didn’t feel the need to point out that cigarettes also contain quite a lot of flavoring chemicals, including benzaldehyde and vanillin, as well as tons of others. The percentages of each are very low, but it adds up since there are lots of them. Based on RJ Reynolds’ maximum levels of use for their ingredients (for any of their brands, so it’s admittedly very unlikely this would represent any one brand) and the listed percentages of each of the flavors (only counting ones with detectable levels and those not also used for other purposes), around 8.5 percent of tobacco, by weight, is composed of flavorings, or 5.3 percent not including menthol. Only one e-liquid was over 4 percent flavorings by weight, with the majority containing under 1 percent. Admittedly the levels would be impacted by the combustion or vaporization process, but the point is clear regardless: vapers inhaled loads of flavorings anyway. So, should we be more worried about flavorings in tobacco cigarettes? Someone probably would be if there weren’t loads of worse things in cigarettes.

For individual flavors like vanillin and benzaldehyde, most e-liquids with them present do contain more (as you may expect), but if you’re concerned about inhalation of flavorings overall, it seems that even a single brand of cigarettes would contain comparable amounts of flavorings to e-liquids. Sadly, when you look for ingredient listings for a specific brand, all you get is the eerily familiar “artificial and natural flavors” line, which really doesn’t cut it, for cigs or e-cigs.

Strangely, despite the simplistic nature of the study and the exaggerated, worst-case calculations, the measures suggested by the authors – listing ingredients (in full) and limiting quantities of those with a known risk – are actually reasonable. This underlines the core point when considering the risk from flavorings: if any are pretty bad, like diacetyl, even if it isn’t a huge risk, mixers can simply stop putting them in. As usual, the media concern goes well above and beyond what is justified by the science or even basic reasoning.