Last Tuesday, the Los Angeles City Council voted to add e-cigarettes to existing smoke-free air laws, effectively banning vaping wherever smoking is prohibited. On the bright side, an amendment to the amendment, exempting bars and other 21-and-over clubs was two votes shy of getting passed. Still, the council meeting was full of opinion-based reasoning and misinterpreted evidence. CASAA has asked vapers to reach out to Mayor Garcetti so I sent him the following email explaining that not only IMPROOF e-cigs work, but they are not a threat to public health:

I'm writing to you today to ask, as a former resident and frequent visitor to Los Angeles, that you don't sign the amendment banning e-cigarette use wherever smoking is prohibited. Having been off cigarettes for nearly a year, the ordinance wouldn't really affect me, as I have completely lost the urge to smoke. But my will wasn't always this strong. This amendment has the potential to greatly decrease the efficacy of electronic cigarettes in newer vapers, who still might have the occasional urge to light up.

After smoking for ten years, wanting to but unable to quit for the last three, I was finally able to live a smoke-free lifestyle when I made the switch to electronic cigarettes last year. I will have one year without a cigarette on March 20th thanks to e-cigs! However, it was not without challenges. When I first started “vaping”, all of my friends still smoked. While I was fine at work, being able to use an e-cig in my office, when I went out afterwards and was around other smokers, the urge to smoke came back and I would “bum” one or two cigarettes at night. It wasn't until most of my friends started using e-cigs that I was finally able to let go of cigarettes for good.

I know the City Council recently approved an amendment to sections 41.50 and 63.44 of the LAMC, banning the use of electronic cigarettes wherever smoking is prohibited. This ordinance may also make it much more difficult for current smokers to switch to e-cigs. It sends the message that e-cigarettes are no more safe than tobacco cigarettes, which is untrue. Studies have found all levels of volatile organic compounds and trace elements detected in e-cig vapor at levels well below both recommended and required safety limits.

In fact many of the toxins that have been detected in e-cig vapor have also been detected in human breath and outdoor air studies. Basically, smoke or no smoke, vapor or no vapor, these volatile organic compounds and trace elements are almost unavoidable as they are present in “clean” air. You can view comparisons of e-cig vapor contaminants with human breath emissions and outdoor air in a report I recently compiled at the link below:

So I ask you, why ban the use of something that not only hasn't been proven to be cause harm to public health, but could very well improve it by reducing the number of smokers in the city of Los Angeles? I urge you to veto this amendment and let individual businesses decide whether or not to allowing use of e-cigarettes on their properties. Most will probably prohibit indoor use on their own, but those that decide to allow it will provide a safe haven for e-cigarette users to avoid both toxic environmental tobacco smoke and the urge to relapse.
Regards,

In addition to contacting the mayor, vapers and supporters of e-cigarettes were encouraged to attend a rally held Saturday afternoon in Pershing Square, which I was able to attend. The event featured three keynote speakers including Herb Gilbert, creator of the world's first e-cig in 1963, John Cameron and Phil Daman of SFATA. The battle may  have been lost but the war is not over. “Save Vape LA”, as the rally has been dubbed, was an opportunity for the community to unite in a grassroots effort to show support for e-cigarettes to the media and more importantly, the city of Los Angeles. (Photos below) There were around 150 to 200 vapers gathered in Pershing Square when I arrived. The Five Pawns crew (right) was in attendance and I also spotted the owners of Villain Vapers and CJ (aka the Vaping Monkey) of Vaper Venue as well as employees from a few local vape shops. In addition to providing a platform for three keynote speakers to educate the public on e-cigarettes, the rally gave vapers the opportunity to record their own “IMPROOF” testimonial for the camera. First on the mic was John Cameron, former CEO of The Safe Cig and brother to film director James Cameron. Today he heads up Emperor Brands in a partnership with the inventor of the electronic cigarette, Herbert A. Gilbert (Gilbert would also present at the rally). Cameron hit the nail on the head when equated regulating e-cigarettes like tobacco cigarettes to treating Nerf guns like a 9mm or .45 caliber pistol.

Next up was Phil Daman, president of SFATA and attorney at Daman and Associates, LLC. Daman was actively involved in the fight to prevent e-cig use from being banned in Los Angeles public places and has become one of the industries biggest lobbyists to the FDA and White House Office of Management and Budget. I've spoken to Daman in the past about potential e-cig regulation in LA and he struck me as a very passionate and intelligent representative of our fast-growing community. Thanks to his and SFATA's efforts, the FDA has been “rethinking e-cigarettes”, according to Daman, and the FDA's Center for Tobacco Products director Mitch Zeller recently came out and said he believes e-cigarettes are far safer than combustible cigarettes. As I expected, Daman delivered a short but very powerful message. 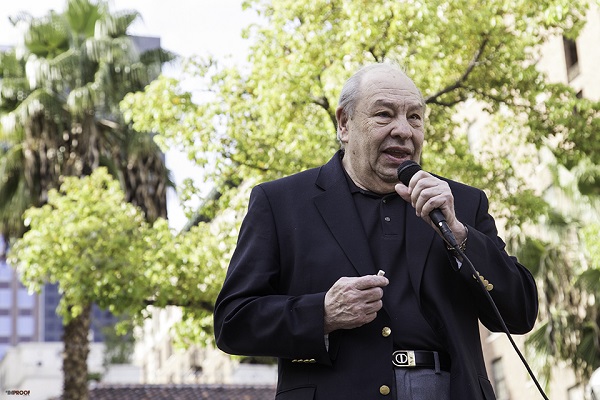 Finally, after proclaiming e-cigs are “technology, not tobacco”, Save Vape LA host and Marketing Director at Vape Revolution, introduced the inventor of the original electronic cigarette, Mr. Herbert A. Gilbert. Prior to this, I had spotted Gilbert in the crowd and initially thought he was “The Old Man” Richard Harrison from the TV show “Pawn Stars”, as they share a stark resemblance. Gilbert captivated the audience and topped off a short speech with a Jerry McGuire-esque “Show me the fire!”.

Save Vape LA truly showed that even though the battle for LA was lost, there is definitely still something we can do to make a difference. Thanks to everyone who attended the rally and to those who didn't, send an e-mail to LA Mayor Garcetti at [email protected] or call him at (213) 978-0600 and let him know why you oppose banning e-cig use in public.