If there’s one thing that defines the vaping industry, it’s innovation. And innovation doesn’t stop: there are tons of great devices hitting the market each month, and this roundup is designed to help you stay up-to-date with newly-released mods and atomizers. October has seen the release of some great mods, including one from legendary manufacturer ProVape, and some notable dripping atomizers, RTAs and sub-ohm tanks, with plenty of innovative design decisions thrown into the mix along the way. So let’s look at what October had to bring. The mod takes its looks directly from the Koopor Mini, featuring two adjustment buttons and an OLED display screen, and runs on a pair of 18650 batteries, which are accessed through a sliding, magnetized door.

It’s priced at $49.99, making it a very appealing choice for vapers on a budget. ProVape has a stellar reputation as a mod-maker thanks to the immensely successful ProVari, and the Radius sees them finally entering the box mod scene. The Radius boasts the exceptional build quality ProVape is known for, is ergonomically designed and is available in numerous colors. The Radius has a maximum power output of 40 W, and can work with coils down to 0.3 ohms in resistance.

This isn’t really competing when it comes to the “most power” contest going on among manufacturers at the moment, but as Julia Hartley-Barnes points out in the first part of her review of the device for Spinfuel, this isn’t really what Pro Vape is about – their focus is on putting out high-quality products, above all else.

The mod is fairly compact, and has a bare-bones, tiny display screen on the wide front edge which shows your current voltage, resistance and battery life at a glance. The mod runs on a single 18650 battery, but one is included with the purchase. The Radius costs $199.95 from ProVape. The Nebox from Kanger is basically like a temperature control equipped version of the eGrip, featuring an all-in-one design which incorporates a tank atomizer capable of holding 10 ml of juice. The mod offers up to 60 W of power with a minimum resistance of 0.15 ohms, and the on-board atomizer also incorporates an RBA head to satisfy any rebuilders looking for an all-in-one device. It runs on a single 18650 battery, and can be charged by micro-USB. We have more information about the Nebox in this post. The iStick family gets another member with the release of the 60 W TC version, which improves on the 40 W TC by boosting the power, adding support for titanium coils (as well as nickel), improving the ergonomics and making the buttons more flush to the body. The device requires a single 18650 battery to run, which is accessed through a magnetic battery door. The mod fires standard coils down to 0.15 ohms in resistance and temperature control coils down to 0.05 ohms. 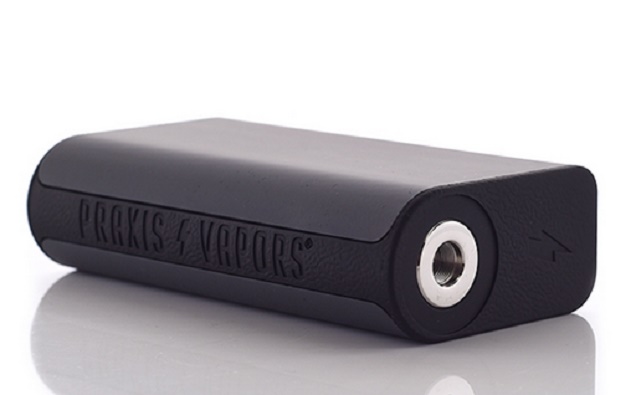 The Decimus by Praxis Vapors is a 150 W box mod aiming to offer a capable, high power device with a sleek, ergonomic design. The mod definitely accomplishes what it set out to in the looks department, hiding the adjustment buttons behind a magnetized door so the screen and fire button are the only things visible without opening something up. The device also has a rubberized grip, which reduces the chance of it slipping out of your hand, and – apparently – “reduces hand fatigue.”

The Decimus is powered by two 18650 batteries, and offers up to 150 W of power or 8 V, with a minimum resistance of 0.2 ohms. This offers plenty of power, but it’s notably missing temperature control, which may be an issue for some.

The device costs $94.99, putting it towards the upper end of the price range, but still competitive. This is a box mod from Project Sub Ohm, offering triple the power of the original version and working with atomizers down to 0.1 ohms in resistance. The device has a black matte finish with a red frame for the OLED screen and red buttons, coming in at 22 mm wide to ensure a flush fit with most atomizers. The mod has a gold-plated brass floating 510 contact for improved conductivity and stainless steel threading. It runs on two 18650 batteries, accessed through coin-slot caps on the bottom of the device. It’s currently priced at $69.99. Indulgence has released their first RTA this month, continuing the Mutation X line with a tank with an RDA-style build deck, boasting huge wicking channels and an intuitive building experience. The deck has a split positive center post, huge wicking ports and deck milled negative posts, as well as PEEK insulators.

The tank itself has an impressive 5 ml capacity, and can be filled from the top so you don’t have to invert it every time you refill. The RTA also has huge airflow, with two adjustable 5.3 by 3.2 mm slots that open up to holes below your coils. This combination of factors has frustrated a few vapers on Reddit due to leaking out of the airflow holes during refilling, but it seems that the issue goes away when you get the wicking set up right. When it’s working, vapers are very impressed with the performance so far.

The Project Sub-Ohm edition is available at VaporDNA for $29.99. The Lush RDA comes from the makers of the Troll, Freakshow and Sapor RDAs. The device is selling itself on its cyclone effect airflow control system, with three sets of two airflow holes arranged diagonally and a carefully designed inner sleeve featuring fins which can be used to choke the airflow either horizontally or vertically to further customize your draw. The result looks a little like a cross between the Swirlfish and a Mutation X V4. This RDA comes from the makers of the Sleeve mod, and features a three-post design, a unique airflow system and a deep juice well. The airflow system is based around two sets of three holes and two slots in the top cap, with the Atty allowing you to flip the top cap upside down to set your airflow to come from either above or below you coils.

The center-post is brass, and it’s square to eliminate post-spin when you’re tightening up. The negative posts are milled into the deck, and the holes in all of the posts are big enough to allow you to use thicker wire gauges. Youde adds to its already impressive range of RTAs with the Bellus, aiming to capture the RDA style in an RTA, and offering a substantial 5 ml capacity tank. The deck has a two-post design, with airholes directly underneath being fed by a total of 32 air holes (which you can close off using the adjustable airflow ring). It also has a top-fill design, so you don’t have to invert your tank to refill. The deck “plugs” in at the bottom of the device – held in place with a locking ring – so it’s easy to get access to without having to empty your tank. The Arctic Turbo is the updated version of the Arctic from Horizon Tech, offering a 4 ml juice capacity, a top-fill design, top and bottom adjustable airflow and a six-coil design incorporating three changeable dual coil atomizer heads. The sub-ohm tank takes its name from the turbine cooling system on the upper end, aiming to help improve heat dissipation and keep the vapor pleasantly cool. The tank’s six-coil design is its main selling-point, but it can also work with an RBA head for anybody who prefers building. The tank is priced at $34.95. This is a 22 mm diameter RDA featuring a dual magnetized top cap to make accessing your coils easier and a top airflow system to minimize leaking. The RDA has a three-post design, with deck-milled negative posts, a square PEEK insulator on the positive post, and 2 mm post holes in each. It uses Allen screws for the posts to prevent accidental loosening, and has a 5 mm juice well. The RDA is currently available for $59.99.

With newly-released devices suitable for every vaper from the just-switching smoker to the cloud-chasing, sub-ohm builder and right through to those just looking for a high-end, reliable device, October has been a great month for new vaping devices. Check back next month for the next roundup!

If you're looking for dry-herb vaporizers, check out our new Pax 3 review.