Innovation is the name of the game in the vaping industry. Every single month, vapers are treated to masses of new devices that push the technology further than we’d have ever thought possible back in the early days where cigalikes dominated, but keeping up to date with the newest vaping product releases isn’t easy. So we’re starting a monthly roundup of new product releases, and this is the first installment, covering August, with a couple of devices from late July and some that are coming up in the near future. Of course, this list isn’t exhaustive – there are a lot of new products released each month – but we’re aiming to give you a run-down of some of the best new vaping products released each month. 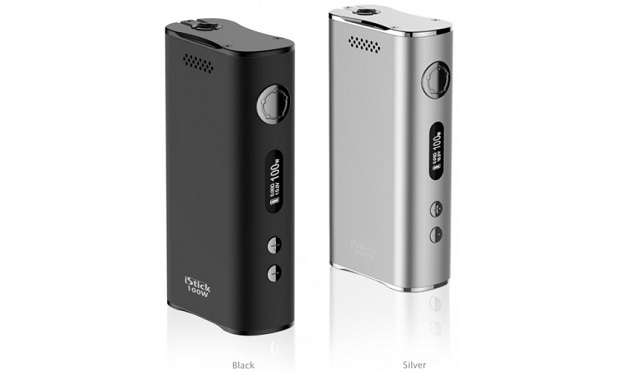 Eleaf’s iStick range has been a favorite of new vapers for some time now, with the 20 W, 30 W and 50 W in standard-size and a couple of Mini options offering a VV/VW vaping experience for very reasonable prices. The range has recently been extended, with the 40 W temperature control option adding the increasingly popular option (enabling vapers to avoid dry hits and fine-tune their vaping experience) to the iStick’s features, but Eleaf also came out with the new 100 W iStick in July, to satisfy vapers looking for a big upgrade in terms of power.

The 100 W iStick is currently available for $44.95 at DirectVapor (with free shipping), and offers variable wattage between 5 and 100 W and variable voltage between 2 and 10 V. It fires any coil of between 0.15 and 5 ohms – with the onboard ohm reader telling you the resistance to two decimal places – has a spring-loaded contact pin, an OLED display, passthrough functionality, all the expected safety features and stainless steel threading on the 510 connection. The device requires two high-drain 18650 batteries, which are sold separately, and has a magnetic battery cover. It measures 10 cm (around 4 inches) tall, 5.4 cm (about 2 inches) wide and 2.6 cm (about an inch) front to back. Smok’s X Cube II builds on the feedback they received on the original version of the device, offering between 6 and 160 W of power, (optional) temperature control between 200 and 600 °F/100 and 315 °C (for an extra few dollars) and the ability to link the device up to a dedicated app via Bluetooth for fine control over settings. It runs on two 18650 batteries – with a magnetic battery cover – and will fire coils between 0.1 ohm and 3 ohms in wattage mode, and as low as 0.06 ohms in temperature control mode. The device also has all the expected safety features, a spring-loaded 510 connection, OLED display and a unique “firing bar” (instead of a button) with a customizable LED light. The device is available for $79.99 with free shipping at DirectVapor (with an RRP of $89.99). Aspire’s Pegasus box mod is a temperature control device (from 200 to 600 °F), offering between 1 and 70 W of power and firing any coils between 0.2 and 5 ohms in resistance (down to 0.1 ohm in temperature control mode). It has a pretty sleek – if perhaps a little dull – design, and is available in three different finishes. It takes a single 18650 battery (sold separately), and works in passthrough mode when you’re using the included micro USB port for charging. The readout tells you the resistance, voltage and wattage you’re operating at down to two decimal places, and you adjust your settings using a gear located towards the top of the device. It has plenty of safety features, too, and a floating 510 connection. The device is available at DirectVapor for $59.99, with a recommended price of $79.99.

A unique addition is the charging dock, although this is sold separately and doesn’t appear to offer any particular benefit other than looking cool. Sigelei’s 150 W TC builds on the success of their box mods by adding temperature control and offering a substantial maximum power. The device is aluminum-bodied and runs on two high-amp 18650 batteries, with a magnetic battery door. It will fire coils from 0.1 to 3 ohms, and can put out anything from 1 to 7.5 V or 10 to 150 W, with a maximum supported current of 35 A. The temperature control function runs at anything from 212 to 572 °F. The device has two adjustment buttons, a fire button and an LED screen along one edge – like the majority of box mods – and the spring-loaded copper 510 connection is raised up slightly to give the device a slightly less boxy appearance. You also get all the safety features you expect from any regulated mod. The Sigelei 150 W TC is available at DirectVapor for $94.95, and for slightly cheaper elsewhere. The iPV D2 from Pioneer4You builds on their success with the other iPV models, offering a redesigned iPV Mini-style device with temperature control functionality and an output of between 7 and 75 W. For temperature control, the device allows anything from 200 to 580 °F, and accepts coils anywhere from 0.05 ohms up to 0.3 ohms, and for ordinary wattage mode, it’ll fire any coil from 0.2 to 3 ohms. It takes a single 18650 battery, which can be easily changed using the sliding ball locking door, and comes with the standard array of safety features and a spring-loaded 510 connection. The iPV D2 is available at DirectVapor for $59.95, with a recommended price of $69.95. 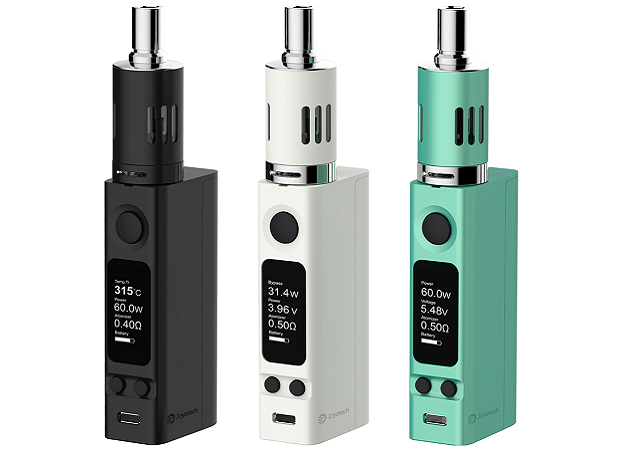 The eVic-VTC Mini from Joyetech is a “cuter” version of the eVic VT, offering the same range for temperature control (200 to 600 °F) and the same output wattage range (1 to 60 W), but being marginally smaller and using an external 18650 battery instead of an in-built one like the larger model. The device fires any coils from 0.05 to 1 ohm for temperature control mode and anything from 0.1 to 3.5 ohms in variable wattage or bypass (raw battery voltage) mode. The design is very similar to the larger model, but it has two buttons to adjust settings instead of the VT’s dial. It has an OLED display screen, a USB charging port (with passthrough) and comes in a kit with the eGo One Mega atomizer. The full kit is available at VaporDNA for $64.99, with a full list price of $79.99.

The 22 mm diameter Phantom Tank from Horizon joins the growing range of sub-ohm tanks available, offering a 5 ml capacity split into two e-liquid chambers. The tank is made from stainless steel and glass, and features a “mechanical cooling system,” which also serves as a splash-proofing and a liquid recycling system. The tank has two options for filling – from the side or bottom – and comes with both a pre-installed bottom turbine dual coil (BTDC – made with 316 stainless steel and Japanese cotton) and a rebuildable atomizer head. You also get a wide-bore stainless steel 510 drip tip with the tank. The Phantom is available for $36.95 at DirectVapor, and has a recommended price of $49.99. The SwirlFish V2 RDA from Project Sub-Ohm is an upgrade to the original SwirlFish, named for its “swirling,” vortex-style airflow system. The atomizer is built from 304 stainless steel, and features a split positive post and two negative posts, with each post-hole measuring 2 mm. Compared to the previous incarnation, the main changes to the new SwirlFish are the new “easy-drip” system – with the top swinging open on a hinge so you can drip without having to find somewhere to set it down – a threaded deck shield – making airflow control easier and boosting juice well space, but being completely removable – improved airflow and the device being shorted to 25 mm.

The airflow system now features two sets of three diagonal slots (with widths increasing from 1 to 2 mm), each with its own airhole (increasing from just under 1 to 1.5 mm). There’s also a new PEEK insulator to increase the RDA’s heat resistance and make it more durable, and silver-plated copper contacts to ensure maximum conductivity. 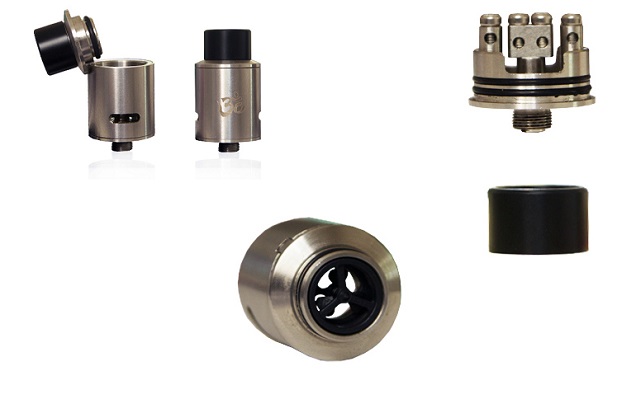 The newest version of the Turbo RDA, the V3, was released at the 2015 ECC. The new version addresses many of the issues vapers had with the earlier models, in particular, changing the center post to the “T”-shape, split post design to make connecting up multiple coils easier. It’s made from stainless steel, has PEEK insulators, a channel for adjustable airflow on either side of the device, a deep juice well, a silver plated copper contact pin, and a Mad Hatter style top cap which flips open like a lid for easier dripping. The Turbo V3 is available for $37.95 at Element Vape. The new Starre Pro Sub-Ohm TC Tank from FreeMax is a sub-ohm tank built with temperature-control devices in mind. With 304 stainless steel and Pyrex glass construction, this 4 ml tank is a top-fill system, with dual adjustable airflow control and an airflow control wide-bore drip tip. It comes with a 0.25 ohm atomizer head built with dual vertical Ni200 coils, allowing for use with temperature control devices, and a spare 0.15 ohm head, all wicked with Japanese cotton. It’s currently available at Element Vape for $25.65, with an RRP of $34.95.

Of course, there are many devices in the pipelines for the future, which will be covered in detail in future roundups. Here’s a taster of the devices coming soon:

Although we can’t cover everything, we’ve done our best to list all of the biggest releases that took place in August. If we’ve missed anything that should have been included in this roundup, let us know in the comments and we’ll add it in!