The JUUL costs $49.99, for a kit including the JUUL, a four-pack of JUUL Pods and a USB charger, which is fairly expensive for an apparently beginner-level device, so is it really worth it? Our Pax JUUL review puts the e-cig through its paces to find out. The JUUL is a great beginners’ e-cig: it gives a more satisfying nicotine hit than any beginner-level device I’ve tried, it’s unbeatably easy to use, it puts out a substantial amount of vapor and it recharges quickly. The flavors could be better, but overall it’s a fantastic option for smokers.
Price: $49.99 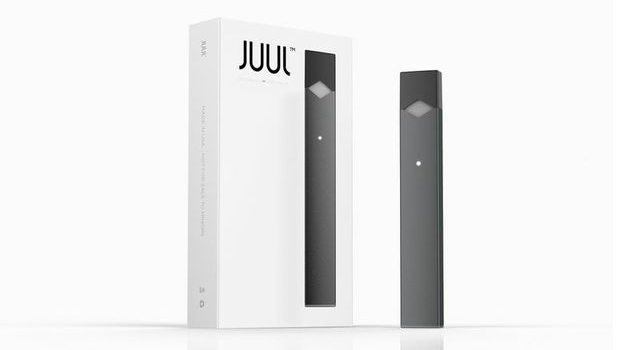 The JUUL is an e-cigarette like you’ve never seen it before. With an appearance more akin to a USB stick than a combustible cig, and simple, beginner-friendly operation that separates it from the majority of devices on the market today, it looks like an ideal option for just-switching smokers or vapers looking for more of an inconspicuous way to get their nicotine.

The type of nicotine is another thing that sets the JUUL Vapor e-cig apart: where most e-cigarettes use free-base nicotine, the JUUL uses nicotine salts – the form found in tobacco leaf – intended to produce an unbeatably satisfying vape. Coming from Pax – who are best known for making, ahem, “loose leaf” vaporizers – the JUUL is a unique e-cigarette, to say the least.

The JUUL costs $49.99, for a kit including the JUUL vaporizer, a four-pack of JUULpods and a USB charger, which is fairly expensive for an apparently beginner-level device, so is it really worth it? Our Pax JUUL review puts the e-cig through its paces to find out. 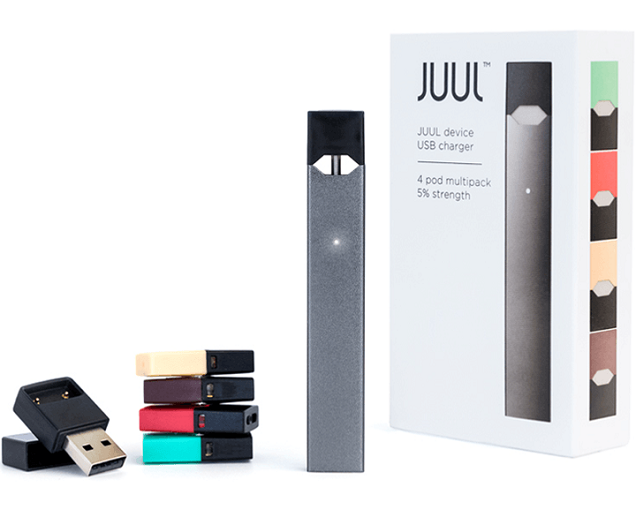 The JUUL Vapor comes in a trim, understated white box, with two slide-out trays surrounded by a cover bearing a picture of the device on the front and all of the information about what’s inside on the back. One of the trays has two slots cut out – one with your JUUL vaporizer sitting inside and the other with the unique magnetic USB charger – and the other has four little windows displaying your JUUL pods, which are held in a plastic insert. There are also some basic instructions on the inside of the outer casing.

The design of the JUUL device itself is definitely interesting. It’s a rectangular device measuring about 9.5 cm tall with the pod attached, and is pretty much bare aside from a diamond-shaped window where the pod meets the battery and a JUUL logo and serial number at the bottom of the back side of the device. The only other design element is an LED light on the upper portion of the front, which glows white when in use, flashes white as you charge and can also be used to give you an idea of the remaining battery.

All of this combines to give the JUUL e-cig a definitively sleek appearance, and although it’s very unusual when set beside other e-cigs, I have to say it does look pretty cool overall. You might even get the occasional strange glance from other vapers, but it definitely has its own aesthetic appeal.

It’s also very simple to put together and use. The JUULpods are partially covered by a colored cap, and you remove this to reveal the metallic contacts which connect with the inside of the device. You simply push this end into the opening at the top of the JUUL and give it a little push so it clicks into place. Then you’re ready to vape: just inhale from the mouthpiece in the way you would from a cigarette (but softer and more gradually. The nicotine content of the JUUL pods is always the same: 5% or 50 mg/ml. Now, this seems like a huge amount of nicotine – at least twice as much as most other e-cigs – but this is one area where comparison with other devices doesn’t really work well with the JUUL. The different type of nicotine is one factor, but the design of the pods only allows 0.7 ml of juice in each one, and as a small device it obviously doesn’t make its way through juice in sub-ohm tank like quantities.

So the nicotine level should be thought of more in terms of satisfaction. This is one area where I struggle to be completely reliable because I don’t ordinarily use high-nicotine juices, but based on my experience – and trying out a few higher nicotine liquids to compare – the JUUL pods’ nicotine level offers a very satisfying hit of nicotine. It’s a little much for long-term vapers like me to use at length, but for a just-switching smoker it would be absolutely perfect.

Whether the nicotine salts really make a difference is hard to say, but I’d definitely say so based on my experience – it’s a more cigarette-like nicotine hit than you get with most e-liquids. I take it with me when I know I won’t have many opportunities to vape, because I couldn’t get such a satisfying amount of nicotine otherwise without turning myself into a portable fog machine. The vapor production is one area experienced vapers like me would expect the JUUL Vapor to fall flat on its rectangular face. It has the size of a cigalike, and in comparison to modern devices, they just plain sucked when it came to vapor production. The JUUL, though, is pleasantly surprising. You shouldn’t expect mod-like clouds from the JUUL e-cigarette, but the vapor production is still substantial, and easily in line with eGo-style devices. For a smoker considering making the switch, suffice it to say that you won’t feel like the JUUL is a weak substitute in terms of either nicotine hit or vapor production: it’s really great on both fronts.

The flavors do let it down a little, though. When I received the JUUL e-cig, there were only four flavors available – Cool Mint (menthol), Fruit Medley (peaches, grapes and berries), Creme Brulee (vanilla cake, custard and crème brulee) and Virginia Tobacco (American tobacco) – and they’ve since added Mango, with more coming soon.

The short version is that most flavors didn’t quite hit the mark. The Creme Brulee has a vague vanilla flavor with some possible hints of creaminess, the Virginia Tobacco has the moderately accurate but primarily foot-like, musty tobacco flavor you get from a cheap e-liquid and the Fruit Medley is dominated by grape, which is well-captured, but the other elements are lost in the mix a little, although you get touches of peach from time to time. The Cool Mint is a pretty excellent menthol, though – offering a sharp, cooling hit of mint that takes me back to my days as a menthol smoker.

The overall problem with the flavors is one of robustness. The flavors do come through, but they’re all a little muted, and are more comparable with the cartridge flavors you got in early cigalikes than the rich, multi-tonal “premium” juices dominating the market today. Don’t get the wrong idea, though – they were all definitely vape-able, and the Cool Mint and Fruit Medley in particular were quite enjoyable, but they were definitely the main disappointment of the whole package. The JUULpods are also a little expensive, at $15.99 for a four-pack, but this should last most users for four days, so it’s still much cheaper than smoking.

So for vapor production, it’s a big thumbs-up for the JUUL, but for the flavors it’s more of a cautious, “it’s enjoyable enough.” The flavors could easily be improved in future, though, and most smokers would probably enjoy the Tabaac in addition to the Mint and Fruit that did it for me.

The battery life on the JUUL vaporizer is limited by the size, but when working in combination with the high-nicotine liquids and satisfying hit from each puff, it’s actually not so bad at all. For most cigarette-sized devices, you’d have to pretty much chain-vape to get a satisfying amount of nicotine, but the JUUL e-cig can be comfortably used in little sittings more like a cigarette. The overall battery life for the average smoker is hard to estimate because I’d gotten enough nicotine from a handful of puffs at a time, but with moderate use I’d say it will last most users through a day of work.

The big bonus when it comes to battery life is the charging: the JUUL goes from being low on battery to fully charged within an hour. This is nothing short of excellent. There are also some beautiful touches on the JUUL it’s worth mentioning. Firstly, the charger and the base of the JUUL are magnetized, so you can pretty much drop the JUUL into place to connect it up. You simply remove the cover on the charger to expose the USB connection and put the bottom of the JUUL into the slot (either orientation) to set it charging. The white light periodically gets weaker and stronger to let you know it’s charging.

The other nice extra is the battery life checking function. You gently tap the top of the JUUL e-cigarette (the mouthpiece of your pod) twice and the LED light will flash green, amber or red to let you know your charge level. It might be simple, but it’s a great little feature that I was very impressed with.

One thing that’s without a doubt is the manufacturing quality on the JUUL e-cig. It’s a simple device, but it’s clearly well-made, and everything works exactly as it should. The compact design and metallic body means it’s pretty sturdy, too, so you don’t have to worry about dropping it. You also get a one-year warranty when you buy the JUUL Vapor e-cigarette, so you’re covered in case anything does go wrong.

To find high quality vaporizer pens like the JUUL, check out this list of the best vape pens. The JUUL Vapor e-cigarette is a brilliant device for just-switching smokers or even vapers looking for something more compact and discreet to use when you’re out of the house. The flavors could do with some improvement, but they’re definitely passable, and with everything else the JUUL has to offer smokers – a substantial hit of nicotine in a very easy-to-use and portable format – it doesn’t detract from the overall offering. If you’re looking for something straightforward, satisfying, discreet and enjoyable to help you kick cigarettes, the JUUL really is one of the best options on the market. It might break the mold when it comes to e-cigs, but it does it extremely well.